Creation science has been a long time personal study of mine. Many years ago I had a close encounter of a spiritual kind with a relative, after said relative turned from a dedicated Christian to bitter agnostic. I desperately tried to witness and pull this relative back into the light, but had to face a sad reality: bitter agnostics are entrenched in their bitterness, and, I was trying to push my way through life on “blind” faith. Let me explain. 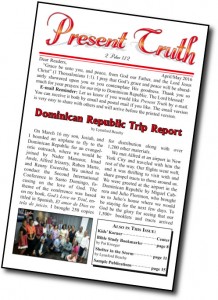 Other than personal experience, something you can’t put your finger on and can’t really explain, everything I knew about the existence of God at that time was from the Bible. News flash: bitter agnostics don’t believe in the Bible, so they throw everything back in your face. I was really tested. After several weeks of discouragement, I reached out to the Lord in earnest prayer. I needed answers!

Amazingly, in the moment of my deepest plea, the Lord brought to mind a verse from Romans 1: “For the invisible things of him from the creation of the world are clearly seen, being understood by the things that are made, even his eternal power and Godhead; so that they are without excuse.” (Rom 1:20) As I thought of the significance of this text I realized that the proof of God was in the created world. He said so!

Suddenly, I remembered a pamphlet I had tucked away in the closet. Was it still there? I had it for years, but never took it seriously and never really read it through. But I knew the title was on creation vs. evolution. The way I was raised, I had always believed in a Creator and a seven-day creation week, so it wasn’t pertinent to me, or so I thought. Little did I know the relevance of understanding not just that God created, but how He created. Immediately, I got up, went into my closet, and put my hands on the brightest ray of light I had seen in weeks. I was overwhelmed that the Lord answered so specifically and so immediately. All I had to do was ask.

Needless to say, I studied every word of that brochure, and the accompanying one. That began a quest that has spanned more than twenty years and has armed me with so much more than blind faith: bombardier beetles, the fossil record, the human eye, the reproductive system, the human mind, life… Do you know that granite, the foundation of the earth, is marked with polonium radio halos, and that Polonium-214 has a half-life 164 microseconds? Do you know that for these radio halos to be present, the granite would have to be in a molten state and turn solid instantaneously? (Even with the parent isotope, Polonium-218, with a half-life of 3 minutes, the most time lapse from molten to solid granite would be 30 minutes, max.) Do you realize that only the very act of creation can account for this? The thought still gives me chills.

I’ve learned a lot of things through my studies. What I’ve gained is confidence in knowing the existence of God is not just in my head. It’s written in nature itself: His signature is on every thing, if only we have “eyes to see.” 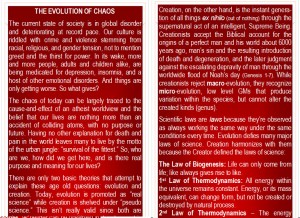 Make no mistake, if you don’t believe in Genesis 1-9 as it is written, if you try to squeeze evolution anywhere into God’s universe, the plan of salvation falls apart. Among other things, evolution puts death before sin, has God calling death “good”, and makes God out to be a bold-faced liar. It’s because of sin that death came, and it’s because of death that Christ came. The devil certainly left his mark on the world when he turned man into a monkey.

My relative is still a bitter agnostic, but it’s not because they haven’t heard the truth. As it says, “they are without excuse.”

(This bookmark is printed below. Contact us to receive your own color copies. Pat is in the process of preparing more bookmarks on various topics.                     Editor)

THE EVOLUTION OF CHAOS

The current state of society is in global disorder and deteriorating at record pace. Our culture is riddled with crime and violence stemming from racial, religious, and gender tension, not to mention greed and the thirst for power. In its wake, more and more people, adults and children alike, are being medicated for depression, insomnia, and a host of other emotional disorders. And things are only getting worse. So what gives?

The chaos of today can be largely traced to the cause-and-effect of an atheist worldview and the belief that our lives are nothing more than an accident of colliding atoms, with no purpose or future. Having no other explanation for death and pain in the world leaves many to live by the motto of the urban jungle: “survival of the fittest.” So, who are we, how did we get here, and is there real purpose and meaning for our lives?

There are only two basic theories that attempt to explain these age old questions: evolution and creation. Today, evolution is promoted as “real science” while creation is shelved under “pseudo science.” This isn’t really valid since both are classed as theories, as neither can be observed in progress today nor repeated in lab tests: both are faith-based systems. Creationists and evolutionists work with the same data, but have different world-views on how to interpret that data. An unbiased look at the scientific evidence can help us decide which theory is more plausible and most probable.

For evolution, Darwin’s theory of natural selection (NS) asserts that molecules will eventually become monkeys, mangoes, and men through slow, random genetic mutations (GMs) over millions of years, and negates the concept of a Creator God. This type of molecules-to-man evolution is called macro-evolution. If such were possible, the world should look like a set from Star Wars, with every living thing in various stages of transition. Instead, we see the opposite, we see stasis. That is, mangoes are still grown from mango seeds and men are still grown from babies.

GMs are reproductive mistakes in the genes that result in loss or misplacement of genetic information and are rarely beneficial. They are responsible for such things as sickle cell anemia and cystic fibrosis and cannot produce atoms-to-Adam evolution because that would require an increase in genetic information.

Creation, on the other hand, is the instant generation of all things ex nihilo (out of nothing) through the supernatural act of an intelligent, Supreme Being. Creationists accept the Biblical account for the origins of a perfect man and his world about 6000 years ago, man’s sin and the resulting introduction of death and degeneration, and the later judgment against the escalating depravity of man through the worldwide flood of Noah’s day (Genesis 1-7). While creationists reject macro-evolution, they recognize micro-evolution, low level GMs that produce variation within the species, but cannot alter the created kinds (genus).

Scientific laws are laws because they’re observed as always working the same way under the same conditions every time. Evolution defies many major laws of science. Creation harmonizes with them because the Creator defined the laws of science:

1st Law of Thermodynamics: All energy within the universe remains constant. Energy, or its mass equivalent, can change form, but not be created or destroyed by natural process.

2nd Law of Thermodynamics: The energy available for useful work has always been decreasing.

Mendel’s laws of genetics: Genes are simply rearranged from generation to generation. Different combinations of genes are formed, not different kinds of genes.

The fossil record also supports the Biblical view, as life appears suddenly and fully developed. The so-called transitional creatures always turn out to be an unknown variety of a known species. So if evolution is not true, why go to such lengths to force it on everyone? It comes down to this: being deliberately created for a divine purpose means we must eventually answer to the One who created us and whether we’ve fulfilled that purpose.

We don’t need medication; we need Jesus Christ, the Son of God, our Creator and Redeemer. He conquered sin and death and offers His victory to us. Through His indwelling Spirit He will create us into His likeness once again, transforming our minds and filling our lives with hope and peace beyond explanation. Only in God and His Son can we have purpose and meaning for our lives now and a future in eternity (1Jo 4:9; 2Co 5:17; Joh 16:33: Phil 4:7). *[answersingenesis.org; restorationministry.com]