Question: Can I ask people for tithe? 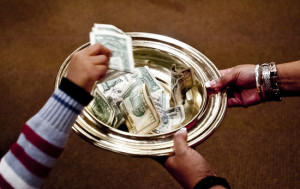 “Sometimes I work in hardship, without anything to supply my needs. Is it possible to ask a church member to give me his tithe?”

This is a good question. Let me begin by pointing out some principles from the Bible.

I know that it is difficult to take care of the basic necessities of life in Africa, and many people struggle with these issues. Yet, God has given His people a command to return a tithe (tenth) of all that they possess and all they acquire, to support the ministry of the gospel. God asked, “Will a man rob God? Yet ye have robbed me. But ye say, Wherein have we robbed thee? In tithes and offerings. Ye are cursed with a curse: for ye have robbed me, even this whole nation. Bring ye all the tithes into the storehouse, that there may be meat in mine house, and prove me now herewith, saith the LORD of hosts, if I will not open you the windows of heaven, and pour you out a blessing, that there shall not be room enough to receive it.” (Malachi 3:8-10)

Here, God is giving all of us a challenge. He asks us to prove whether His word is true, by returning a tenth of all of our increase to the Lord. He says that if we do this, He will be faithful to supply us with blessings over and above what we need. Jesus said, “Give, and it shall be given unto you; good measure, pressed down, and shaken together, and running over, shall men give into your bosom. For with the same measure that ye mete withal it shall be measured to you again.” (Luke 6:38) This promise is not just for the rich, but for all people, regardless of how much they have. If you work today, and earn ten dollars (or ten Tanzanian shillings), then one dollar (or one shilling) of that belongs to the Lord. If you use it for your own personal needs, you have robbed God.

One day Jesus was watching the worshipers coming into the temple. “And he looked up, and saw the rich men casting their gifts into the treasury. And he saw also a certain poor widow casting in thither two mites. And he said, Of a truth I say unto you, that this poor widow hath cast in more than they all: For all these have of their abundance cast in unto the offerings of God: but she of her penury hath cast in all the living that she had.” (Luke 21:1-4) This woman did not have to give “all the living that she had,” but she did it anyway, even though she only had two mites. God required of her to give ten percent of her living, but instead, she gave it all. This was more than the rich because they only gave a portion of their living, while she gave it all. I am sure God was pleased with this gift, and poured out blessings more than she could receive, just as He had promised.

The poor in Africa are just as obligated to return tithe as the richest people in Europe, Australia, or the United States. A lot of poor people in Africa think that because they only get a small amount of food and money that God does not expect them to return the tithe to the Lord. That is a big mistake, and may be part of the reason why they get so little. Jesus said, “He that is faithful in that which is least is faithful also in much: and he that is unjust in the least is unjust also in much.” (Luke 16:10) If you are not faithful with the little that comes your way, do you think God will send great things to you? Certainly not!

The fact is, even poor people eat food, so they must have acquired it in some way. When Elijah was sent to a poor woman in Zarephath who was collecting sticks to cook her last meal for herself and her son before they died, Elijah said unto her, “make me thereof a little cake first, and bring it unto me, and after make for thee and for thy son.” (1 Kings 17:13) God tested her faith by asking her to give a portion to Him first, and then He blessed her with food for many days. If someone gives you one loaf of bread today, one tenth of that belongs to the Lord, and should be returned to Him by entrusting it to the hands of a minister of the gospel. If this was done faithfully in Africa, the ministers of the gospel should have enough food to feed themselves and their families without relying on aid from overseas. Paul wrote, “The Lord ordained that they which preach the gospel should live of the gospel.” (1 Corinthians 9:14)

Now, back to your question. Can you ask people to give you their tithe? I don’t see this type of thing practiced in the New Testament. Paul received tithes and offerings, but I don’t find a record of him directly asking someone for it. There were other ministers as well. Paul said, “I have planted, Apollos watered; but God gave the increase.” (1 Corinthians 3:6) I doubt that Paul would have asked someone to give him tithe as opposed to giving it to Apollos or one of the other apostles. I, personally, have met ministers who have asked me to give them tithe, and it always left a bad taste in my mouth. I felt that if they were working for God, God would supply their needs without them having to directly ask people for money.

When Jesus sent forth workers into the ministry He said, “Carry neither purse, nor scrip… And in the same house remain, eating and drinking such things as they give: for the labourer is worthy of his hire.” (Luke 10:4, 7) Jesus did not tell them to ask people to give them food, but said that they should eat and drink “such things as they give.” It is your responsibility, as a minister, to instruct people concerning their requirements regarding tithe. Paul said, “I have not shunned to declare unto you all the counsel of God.” (Acts 20:27) After you have instructed them, then leave it in the hands of God whether they give their tithe to you, or to other ministers.