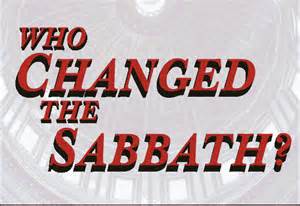 “shall think to change times and laws”(Daniel 7:25)

“We observe Sunday instead of Saturday because the Catholic Church in the Council of Laodicea (364 AD) transferred the solemnity from Saturday to Sunday.” (The Converts Catechism, Peter Giermann, page 50. This catechism received the pope’s blessing on January 25, 1910)

“Ques.—Have you any other way of proving that the [Catholic] Church has power to institute festivals of precept [to command holy days]?”

“Protestants… accept Sunday rather than Saturday as the day for public worship after the Catholic Church made the change… But the Protestant mind does not seem to realize that in observing Sunday, they are accepting the authority of the spokesman for the church, the Pope.” (Our Sunday Visitor, February 5, 1950)

“The Church changed the observance of the Sabbath to Sunday by right of the divine, infallible authority given to her by her founder, Jesus Christ. The Protestant claiming the Bible to be the only guide of faith, has no warrant for observing Sunday.” (The Catholic Universe Bulletin, August 14, 1942, page 4)

“We hold upon this earth the place of God Almighty.” (Pope Leo XIII, in an Encyclical Letter, dated June 20, 1894)

“The Pope is not only the representative of Jesus Christ, but he is Jesus Christ Himself, hidden under veil of flesh.” (The Catholic National, July 1895)

“Like two sacred rivers flowing from paradise, the Bible and divine Tradition contain the Word of God, the precious gems of revealed truth. Though these two divine streams are in themselves on account of their divine origin, of equal sacredness, and are both full of revealed truths, still, of the two, Tradition [the sayings of popes and councils] is to us more clear and safe.” (Di Bruno,Catholic Belief, page 33)

“Sunday is a Catholic institution, and its claims to observance can be defended only on Catholic principles… From beginning to end of Scripture there is not a single passage that warrants the transfer of weekly public worship from the last day of the week to the first.” (The Catholic Press, Sydney, Australia, August, 1900)

“It is well to remind the Presbyterians, Baptists, Methodists, and all other Christians, that the Bible does not support them anywhere in their observance of Sunday. Sunday is an institution of the Roman Catholic Church, and those who observe the day observe a commandment of the Catholic Church.” (Priest Brady, in an address at Elizabeth, New Jersey on March 17, 1903. Reported in the Elizabeth, New Jersey News of March 18, 1903)

“Some non-Catholics object to Purgatory because there is no specific mention of it in Scripture. There is no specific mention of the word Sunday in Scripture The Sabbath is mentioned, but Sabbath means Saturday. Yet the Christians of almost all denominations worship on Sunday not on Saturday. The Jews observe Saturday. Nowhere in the Bible is it stated that worship should be changed from Saturday to Sunday.” (Martin J. Scott, Things Catholics are Asked about, 1927, page 236)

“This people draweth nigh unto me with their mouth, and honoureth me with their lips; but their heart is far from me. But in vain they do worship me, teaching for doctrines the commandments of men.” (Matthew 15:8, 9)

The introduction of false doctrines

Sunday is not the only alteration the papacy has attempted to make to God’s law. The following is a list of doctrines that have been introduced by the papacy:

A.D. 300—Prayers for the dead, and the Sign of the cross. 321—Sunday laws and enforced Sunday-keeping. 325 & 381—The trinity doctrine. 375—Veneration of angels and dead saints, and the use of Images. 394—Daily celebration of the heathen Mass. 400—Persecution of Bible (Seventh-day) Sabbath-keepers begins. 431—Exaltation of Mary, as she is called “Mother of God.” 450—Death Sentence for Sabbath-keepers. 500—Priests dress differently. 526—Extreme Unction. 593—Purgatory. 600—Latin language alone in prayer and worship, and prayers directed to Mary, dead saints and angels. 607—Title of Pope or universal Bishop first used. 709—Kissing the pope’s foot. 750—Civil power of the pope. 786—Worship of the cross, images, relics, and bones. 850—Holy water. 927—College of cardinals. 965—Baptism of bells. 995—Canonization of dead saints. 998—Fasting on Fridays and Lent. 1079—Celibacy of the priests. 1090—The Rosary and mechanical praying with beads. 1184—The Inquisition. 1190—Sale of Indulgences. 1215—Auricular Confession of sins to a priest instead of to God. 1220—Adoration of the wafer [the host]. 1229—Bible officially forbidden to laymen (placed on the “Index of Forbidden Books”). 1251—The Scapular. 1414—Cup forbidden to the people. 1508—The Ave Maria to be said with the beads. 1534—Jesuit order founded. 1545—Tradition (the sayings of Catholic leaders) officially declared of equal authority with Scripture. 1546—Apocryphal books officially added. 1854—Immaculate Conception proclaimed. 1864—Papal “Syllabus of Errors” condemns freedom of religion, speech, conscience, press, and scientific discoveries. 1870—Infallibility of the pope. 1930—Public, and all non—Catholic schools condemned. 1950—Assumption (translation and ascension) of the Virgin Mary proclaimed. 1965—Mary is made the mother of the church. 1998—Papal letter “Dies Domini” calling for laws enforcing Sunday sacredness. Add to these many others: monks, nuns, hermits, monasteries, convents, Lent, holy week, Palm Sunday, Ash Wednesday, All Saints day and Halloween, fish day, flagellation (beating oneself to increase holiness), incense, holy oil, medals, charms, novenas, and on and on.

As you can see, the papacy has gone down hill. Why did it take so long to come up with these false ideas (commandments of men)? In 786 they began worshiping images, which is strictly forbidden in the ten commandments. “Thou shalt not make unto thee any graven image, or any likeness of any thing that is in heaven above, or that is in the earth beneath, or that is in the water under the earth: Thou shalt not bow down thyself to them, nor serve them: for I the LORD thy God am a jealous God, visiting the iniquity of the fathers upon the children unto the third and fourth generation of them that hate me; And shewing mercy unto thousands of them that love me, and keep my commandments.” (Exodus 20:4-6)

The Handbook for Today’s Catholic, along with many Catechisms, lists the ten commandments leaving out the second commandment, the one I just quoted, and splitting the ninth into two to retain the number ten. This is a blatant change of God’s commandments. Daniel prophesied concerning the papacy, “And he shall speak great words against the most High, and shall wear out the saints of the most High, and think to change times and laws: and they shall be given into his hand until a time and times and the dividing of time [1260 years – the Dark Ages].” (Daniel 7:25)