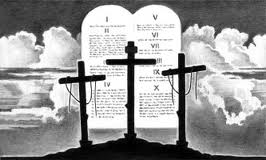 In Romans 10:4 we read as follows: “For Christ is the end of the law for righteousness to every one that believeth.” Before showing what this text means, it may be well to briefly show what it does not mean. It does not mean that Christ has put an end to the law, because 1. Christ Himself said concerning the law, “I am not come to destroy.” (Matthew 5:17) 2. The prophet said that instead of destroying it, the Lord would “Magnify the law and make it honorable.” (Isaiah 42:21) 3. The law was in Christ’s own heart: “Then said I, Lo, I come; in the volume of the book it is written of me, I delight to do thy will, O my God; yea, thy law is within my heart.” (Psalm 40:7, 8) And 4. since the law is the righteousness of God, the foundation of His government, it could not by any possibility be abolished. (See Luke 16:17.)

The reader must know that the word “end” does not necessarily mean “termination.” It is often used in the sense of design, object, or purpose. In 1 Timothy 1:5 the same writer says,“Now the end of the commandment is charity out of a pure heart, and of a good conscience, and of faith unfeigned.” the word here rendered “charity” is often rendered “love,” and is so rendered in this place in the New Version. In 1 John 5:3 we read, “This is the love of God, that we keep his commandments,” and Paul himself says that “love is the fulfilling of the law.” (Romans 13:10) In both these texts the same word (agape) is used that occurs in 1 Timothy 1:5. Therefore we say that this text means, Now the design of the commandment (or law) is that it should be kept. Everybody will recognize this as a self-evident fact.

But this is not the ultimate design of the law. In the verse following the one under consideration, Paul quotes Moses as saying of the law that “the man that doeth those things shall live by them.” Christ said to the young man, “If thou wilt enter into life, keep the commandments.” (Matthew 19:17) Now since the design of the law was that it should be kept, or, in other words, that it should produce righteous characters, and the promise is that those who are obedient shall live, we may say that the ultimate design of the law was to give life. And in harmony with this thought are the words of Paul, that the law “was ordained to life.” (Romans 7:10)

But “all have sinned and come short of the glory of God,” and “the wages of sin is death.” Thus it is impossible for the law to accomplish its design in making perfect characters and consequently giving life. When a man has once broken the law, no subsequent obedience can ever make his character perfect. And therefore the law which was ordained unto life is found to be unto death. (Romans 7:10)

If we were to stop right here with the law unable to accomplish its purpose, we should leave all the world under condemnation and sentence of death. Now we shall see that Christ enables man to secure both righteousness and life. We read that we are “justified freely by his grace through the redemption that is in Christ Jesus.” (Romans 3:24) “Therefore being justified by faith, we have peace with God through our Lord Jesus Christ.” (Romans 5:1) More than this, He enables us to keep the law. “For he [God] hath made him [Christ] to be sin for us, who knew no sin; that we might be made the righteousness of God in him.” (2 Corinthians 5:21) In Christ, therefore, it is possible for us to be made perfect—the righteousness of God—and that is just what we would have been by constant and unvarying obedience to the law.

What could not the law do? It could not free a single guilty soul from condemnation. Why not? Because it was “weak through the flesh.” There is no element of weakness in the law; the weakness is in the flesh. It is not the fault of a good tool that it cannot make a sound pillar out of a rotten stick. The law could not cleanse a man’s past record and make him sinless; and poor, fallen man had no strength resting in his flesh to enable him to keep the law. And so God imputes to believers the righteousness of Christ, who was made in the likeness of sinful flesh, so that “the righteousness of the law” might be fulfilled in their lives. And thus Christ is the end of the law.

To conclude, then, we have found that the design of the law was that it should give life because of obedience. All men have sinned and been sentenced to death. But Christ took upon Himself man’s nature and will impart of His own righteousness to those who accept His sacrifice, and finally when they stand, through Him, as doers of the law, He will fulfill to them its ultimate object, by crowning them with eternal life. And so we repeat, what we cannot too fully appreciate, that Christ is made unto us “wisdom, and righteousness, and sanctification, and redemption.”