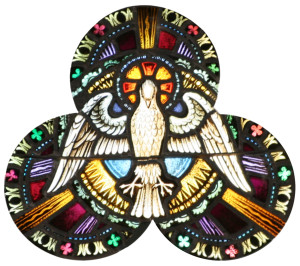 “Could not Isaiah 9:6 support the idea that Father, Son and Holy Ghost are only one being, with the Father being God’s mind, the Son His body and the Holy Ghost His Spirit?”

No, Isaiah 9:6 only mentions one individual, the Son of God. In that verse the Son of God is called “the everlasting Father,” but this title is not given to Christ because He is His own Father, but rather because He is the Father of the children which His Father has given him. Isaiah 8:18 mentions this, when Jesus said, through Isaiah, “Behold, I and the children whom the LORD hath given me are for signs and for wonders in Israel from the LORD of hosts, which dwelleth in mount Zion.” (Isaiah 8:18) We know that this verse refers to Christ because it is applied to him in Hebrews 2:13. Christ is the Father of the redeemed, “the author and finisher of our their faith.” (Hebrews 12:2)

I am the son of my earthly father. Yet, at the same time I am the father of my son. If someone were to come to me and call me a father, I would not assume they are thinking that I am my own father. I would know they are referring to me as a father of my son. Surely, we can expect no less of God. When He inspired Isaiah to refer to Christ as a “father,” He was not trying to indicate that Christ was the Father of Himself. Furthermore, the term Holy Spirit is not used at all in Isaiah 9:6, thus making it impossible for this verse to prove that the Father, the Son and the Holy Spirit are all one being. The Bible clearly makes a distinction between the Father and His Son, portraying them as two separate beings. (Daniel 7:9, 13; Revelation 5:1, 7; 1 Corinthians  8:6; Zechariah 6:12, 13; Proverbs 30:4, etc.)

The idea that the Father is the mind, the Son the body, and the Holy Ghost the Spirit, of one being, is not taught in the Bible. If that were true, when Christ was on earth you would have the body (Christ) praying to His own mind (the Father), asking his mind to take away the cup from his body, but then exclaiming to his mind, not my will but thine be done. This is evidently absurd. At Christ’s baptism you would have the mind speaking from heaven to His body, saying, “This is my beloved Son.” This would have been a lie if the Son was merely the body of the Father. I have a body, and I have a son, and I can tell you for sure they are not the same. My son is a separate being from myself.

“God so loved the world, that he gave his only begotten Son, that whosoever believeth in him should not perish, but have everlasting life.” (John 3:16) God’s love is so deep and so broad that He sent His only begotten Son to die for our sins. When we see this love it breaks our hearts and changes our lives. Any deviation from the Bible on this point is a deviation from our ability to love God with all our heart.