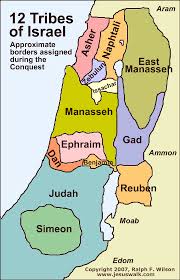 “I’m wondering if I might be one of the people who’s condemned regardless of what they do. I’ve seen several references to the fact of the Tribe of Dan being omitted from the 12 tribes in Revelation 7:5, and I am wondering if, being of Celtic descent which is likely to be the tribe of Dan, if I might be a condemned person by birthright. Do you have any thoughts on the omission of Dan from the tribes “sealed”?
“There are also many verses stating or implying that those who God is pleased with are blessed with abundance—stated in different metaphors, and I’m certainly not blessed with abundance, so I do wonder sometimes if I’m just condemned from the get-go.”

My dear friend, Jesus said, “Him that cometh to me I will in no wise cast out.” (John 6:37) There is no such thing as a person who is condemned regardless of what they do. The Bible says, “For the love of Christ constraineth us; because we thus judge, that if one died for all, then were all dead: And that he died for all, that they which live should not henceforth live unto themselves, but unto him which died for them, and rose again.” (2 Corinthians 5:14, 15) It also says of Christ that “he is the propitiation for our sins: and not for ours only, but also for the sins of the whole world.” (1 John 2:2)

Christ paid for every sin of every individual who has ever lived, or ever will live, on this earth. It is not God that originated the idea that some are doomed no matter what they do, but this thought proceeds from the father of lies, the devil himself. We can accept Christ’s promise that if we come to Him He will not cast us out, and “If we confess our sins, he is faithful and just to forgive us our sins, and to cleanse us from all unrighteousness.” (1 John 1:9) These promises are not for a select few, but written for all. The Bible says that God’s righteousness is offered “unto all and upon all them that believe: for there is no difference. For all have sinned, and come short of the glory of God.” (Romans 3:22, 23) Don’t hesitate to come to Christ in faith, believing that what He said is true, and trusting that if you confess your sins He will forgive you as promised and accept you as His child.

Regarding the tribe of Dan being omitted from the list of the 144,000 that are sealed. These tribes of Israel mentioned are not literal tribes, for Paul wrote, “For as many of you as have been baptized into Christ have put on Christ. There is neither Jew nor Greek, there is neither bond nor free, there is neither male nor female: for ye are all one in Christ Jesus. And if ye be Christ’s, then are ye Abraham’s seed, and heirs according to the promise.” (Galatians 3:27-29) The list of the twelve tribes in Revelation 7 are descriptions of characters rather than literal blood lines. The tribes of Dan and Ephraim are not mentioned, not because of who their parents are, but because the characters they represent are not permitted to enter heaven. If your character matches that of Dan, and you refuse to give your heart to Christ, then you will be lost.

The Bible tells us about the sins of Dan, and if we follow them, we will be guilty of his sins. King Jeroboam set up two golden calves, similar to the one worshiped by the Israelites at the base of Mount Sinai. One calf he set in Bethel, and the other he set in Dan. (1 Kings 12:28-30) These idols remained for many years, causing the downfall of many people. Dan was well known for its false gods. In Amos 8:14 we read, “They that swear by the sin of Samaria, and say, Thy god, O Dan, liveth; and, The manner of Beersheba liveth; even they shall fall, and never rise up again.” (1 Kings 12:28) The tribe of Dan worshipped a false god. If you are worshipping a false god, you are as guilty as was the tribe of Dan many years ago. Also, if you worship the true God, and have accepted Christ as your Saviour, even if you are a descendent of Dan, you will not be held responsible for his sins, and you will live forever with Christ. God has promised, “The soul that sinneth, it shall die. The son shall not bear the iniquity of the father, neither shall the father bear the iniquity of the son: the righteousness of the righteous shall be upon him, and the wickedness of the wicked shall be upon him.”(Ezekiel 18:20)

Regarding the idea that earthly riches proves God’s blessing and earthly poverty proves His disapproval: This could not be further from the truth. This is exactly the misconception the Jews had, and was expressed by the disciples when Jesus said, “Verily I say unto you, That a rich man shall hardly enter into the kingdom of heaven.” When His disciples heard this, “they were exceedingly amazed, saying, Who then can be saved? But Jesus beheld them, and said unto them, With men this is impossible; but with God all things are possible.” (Matthew 19:23-26) The disciples thought that if a man was rich it was sure evidence that he was in favor with God, so when Jesus said that a rich man will hardly enter into heaven they thought that would surely exclude the poor. With the parable of the rich man and Lazarus Jesus taught that the poor who are faithful to God are more favored in heaven than the rich who despise God and have no love for their fellow men.

There are many examples in the Bible of God’s people who were destitute of earthly riches, but highly favored of God. Jesus said, “The foxes have holes, and the birds of the air have nests; but the Son of man hath not where to lay his head.” (Matthew 8:20) Jesus and His disciples were very poor, yet highly favored of God. John the Baptist seemingly had none of this world’s goods, but Jesus said he was the greatest prophet. Elijah was destitute of this world’s goods, forced to sleep in the wilderness, yet he was so highly favored of God that he was one of the two men God took to heaven without seeing death. (2 Kings 2:11) The opposite can also be demonstrated. Many rich men have been some of the most wicked people in the Bible. Earthly riches does not indicate God’s favor, nor does earthly poverty indicate God’s disapproval.

I hope this helps to answer your questions, and I pray that you will believe God’s Word and accept Christ as your Saviour.