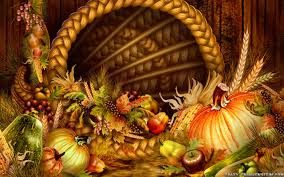 Do you believe in Thanksgiving? If you do why? Have you done a study on it?

Yes, I believe thanksgiving is a holiday that, compared to the rest of the holidays in the year, can truly be called a Christian holiday. I say this because Christmas, Easter, Lent, Good Friday, and many others have pagan origins as was demonstrated in the November, 2001 issue of Present Truth.

Thanksgiving was originally observed by Christians to thank God for the things He has provided. The Encarta Encyclopedia has this to say about the origin of Thanksgiving:

“Long before Europeans settled in North America, western Europeans observed Harvest Home festivals to celebrate the successful completion of gathering-in the season’s crops. In the British Isles, Lammas Day (Loaf Mass Day), observed on August 1, was often held to celebrate a good wheat harvest. If the wheat crop was disappointing, the holiday was usually canceled.

“Another important precursor to the modern Thanksgiving holiday was the custom among English Puritans (see Puritanism) of designating special days of thanksgiving to express gratitude for God’s blessings. These observances were not held regularly; they usually took place only in times of crisis or immediately after a period of misfortune had passed. Puritan thanksgiving ceremonies were serious religious occasions and bore only a passing resemblance to modern Thanksgiving celebrations. (“Thanksgiving Day,” Microsoft® Encarta® Encyclopedia 2000)

The World Book Encyclopedia has this to say about Thanksgiving:

“The first Thanksgiving observance in America was entirely religious and did not involve feasting. On Dec. 4, 1619, a group of 38 English settlers arrived at Berkeley Plantation, on the James River near what is now Charles City, Va. The group’s charter required that the day of arrival be observed yearly as a day of thanksgiving to God.

“The first Thanksgiving in New England was celebrated in Plymouth less than a year after the Plymouth colonists had settled in America. The first dreadful winter in Massachusetts had killed about half the members of the colony. But new hope arose in the summer of 1621. The settlers expected a good corn harvest, despite poor crops of peas, wheat, and barley. Thus, in early autumn, governor William Bradford arranged a harvest festival to give thanks to God for the progress the colony had made.

“The festival lasted three days. The men of Plymouth had shot ducks, geese, and turkeys. The menu also included clams, eel and other fish, wild plums and leeks, corn bread, and watercress. The women of the settlement supervised cooking over outdoor fires. About 90 Indians also attended the festival. They brought five deer to add to the feast. Everyone ate outdoors at large tables and enjoyed games and a military review. Similar harvest Thanksgivings were held in Plymouth during the next several years, but no traditional date was set.

“Later Thanksgiving Days in the United States. The custom of Thanksgiving Day spread from Plymouth to other New England colonies. During the Revolutionary War, eight special days of thanks were observed for victories and for being saved from dangers. In 1789, President George Washington issued a general proclamation naming November 26 a day of national thanksgiving. In the same year, the Protestant Episcopal Church announced that the first Thursday in November would be a regular yearly day for giving thanks.

“For many years, the country had no regular national Thanksgiving Day. But some states had a yearly Thanksgiving holiday. By 1830, New York had an official state Thanksgiving Day, and other Northern states soon followed its example. In 1855, Virginia became the nation’s first Southern state to adopt the custom.

“Sarah Josepha Hale, the editor of Godey’s Lady’s Book, worked many years to promote the idea of a national Thanksgiving Day (see HALE, SARAH JOSEPHA). Then President Abraham Lincoln proclaimed the last Thursday in November 1863, as ‘a day of thanksgiving and praise to our beneficent Father.’ Each year afterward, for 75 years, the President formally proclaimed that Thanksgiving Day should be celebrated on the last Thursday of November. But in 1939, President Franklin D. Roosevelt set it one week earlier. He wanted to help business by lengthening the shopping period before Christmas. Congress ruled that after 1941 the fourth Thursday of November would be observed as Thanksgiving Day and would be a legal federal holiday.” (“Thanksgiving Day,” World Book Encyclopedia 1999)

From all I have studied on this subject there is no pagan origin of Thanksgiving. I can see no reason to cease from giving thanks to God each year on a day that is set aside for that purpose. I personally have many things to be thankful for. Thanksgiving day is a wonderful opportunity to get together with friends and family since most people do not work on that day. Some people even exchange gifts on that day instead of doing so on Christmas day.