(This is the thirteenth in a series of heal 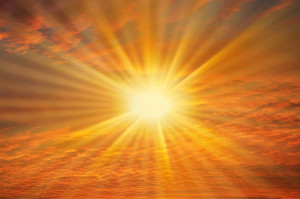 th articles that are designed to help you gain a deeper appreciation for God’s amazing handiwork of the human body, and a better understanding of how it works and how it can be better maintained by simple methods. George McDaniel is my father-in-law, and has been a registered nurse for many years, which, along with much research, has taught him many useful health principles. I pray that you are being blessed by these articles.    Editor)

Sunlight – and its contribution to health

All life on earth depends on the sun. Most of the energy on earth comes from, or has come from, the sun. The only exception I can think of would be the heat coming from the core of the earth and the energy produced by radioactive elements. Even the energy in coal, oil and wood, used for producing fire, originally came from the sun. Sunlight, in the presence of chlorophyll, the green pigment in plants, causes water and carbon dioxide to unite into glucose. As a by-product of this reaction, oxygen is released into the air. Thus we depend on the sun for the food we eat and for the oxygen in the air we breathe.

We also depend on the sun for having water to drink. Air that has been warmed by the sun absorbs water from the oceans. As it passes over land and goes to higher elevations, it cools and releases some of the water in the form of rain or snow. This feeds the streams and rivers and lakes and some of it soaks into the ground where it can be obtained from springs and wells. If not for this continual process, all water would be in the oceans and not suitable for drinking.

Besides depending on the sun for food, air and water, the human physical organism needs direct contact with the sun’s rays to maintain health. From the time the world was created until very recently, man has lived and worked outside with full exposure to the sun’s rays. Agricultural, pastoral and hunting activities required an outdoor life. This changed suddenly with the industrial revolution. Thousands of people moved into cities and worked in factories, mines and, more recently, offices. This led to the belief that man is no longer dependent on the natural world, but can live apart from it.

In modern society, man lives, studies and works behind walls and glass, starting at a very young age. Our homes, schools, transportation, and places of employment all shield us from the sun. Many people spend most of their lives under artificial lighting that is entirely different from that which comes from natural sunlight.

The sun radiates energy in many different frequencies. The energy is transmitted in the form of electromagnetic waves of varying lengths. These vary in length from cosmic rays, which have a wavelength of .00001 nanometer (a nanometer is one billionth of a meter), to electric waves with a wavelength of about 4,990 kilometers. Most of this solar energy is absorbed by the earth’s atmosphere, and so doesn’t reach the surface of the earth. This is good because the shorter wavelengths are harmful to life. These include cosmic rays, gamma rays, x-rays and shortwave ultraviolet, also called far ultraviolet. The radiation that reaches the earth includes middle and near ultraviolet, visible light and shortwave or near infrared.

From ancient times men have known the sun to have life-giving, healing power. However, it is only recently that scientific evidence has been obtained that shows why the sun is such a positive factor for health. In 1877, it was discovered that sunlight is able to destroy bacteria. From this point onward, sunlight was studied as the only effective means of treating bacterial infections known at that time. In 1903, Niels Finsen won the Nobel Prize for successfully treating skin tuberculosis with ultraviolet light. Other studies revealed the potent effects the sun has on the human body. Exposing the body to ultraviolet light was found to lower high blood pressure, decrease elevated blood glucose levels as found in diabetes, decrease blood cholesterol, and increase lymphocytes in the blood, which are responsible for the body’s ability to resist disease.

The interest of the medical world in the healing power of sunlight began to decrease when antibiotics were discovered. In 1939, a man named Gerhard Domagk won the Nobel Prize for successfully treating bacterial infections with sulfanilamide. Shortly afterward, Alexander Fleming discovered penicillin. When medical attention turned to chemicals, the sun’s effect on health began to be regarded as little more than a placebo. The current concept of the sun is that it is dangerous and destructive, responsible for aging of the skin and a cause of skin cancer.

It can’t be denied that there is a connection between sunlight and aging of the skin and skin cancer. The available research data indicates that the primary cause of these two conditions is the highly refined diet of most people in the western world. Sunlight seems only to accelerate the problem.

Antibiotic drugs are proving to be less than the total answer to human disease that they were once thought to be. Drug resistant strains are developing at an alarming rate. Also, there are no good anti-viral drugs. Our attention needs to turn to developing the immune response of the body to resist disease. One of the effects of sunlight is to increase the body’s natural resistance to disease, as well as physically destroying disease-causing bacteria. Sunlight is also beneficial in treating some of the chronic degenerative diseases. As we look more deeply into some of these areas of concern in coming issues, we will see that the sun continues to be a potent, life-giving, healthful force for modern man and that separation from sunlight will result in disease just as surely as will separation from nourishing food, water, fresh air and exercise.