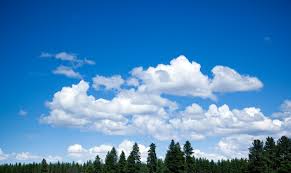 signed to help you gain a deeper appreciation for God’s amazing handiwork of the human body and a better understanding of how it works and how it can be better maintained by simple methods. George McDaniel is my father-in-law, and has been a registered nurse for many years, which, along with much research, has taught him many useful health principles. I pray that you are being blessed by these articles.     Editor)

In the previous two articles, we have looked at the anatomy and physiology of breathing. This article will say something about what constitutes good air.

In order to be healthy and feel alert and energetic we need pure, clean, fresh air. As sunlight passes through the atmosphere, it ionizes some of the air molecules (that is, gives them an electric charge). There is usually a ratio of four negative ions to five positive ions. Other factors in the environment contribute to the production of ions, such as thunderstorms, and the movement of water through the air, such as a waterfall or a rain shower.

An increase in the ratio of positive ions can bring on adverse effects such as headache, nasal obstruction, hoarseness, fatigue, dry throat and dizziness. Positively charged air depresses the adrenal glands and their ability to secrete hormones that protect the body against stress. Thus living and working indoors can leave us vulnerable to stress unless the negatively charged outdoor air is allowed to come in through an open window or is properly treated by a heating or air conditioning unit. For the air to be properly treated, the heating or air-conditioning unit would need to be able to provide correct humidity and ion concentrations.

From this we can see that we need to spend as much time as possible out of doors in the fresh air and sunlight. Since the outside air retains its negative ions at night, the bedroom windows should be open. Even during the winter the windows should be left open a little. In any room that is occupied, the air should be changed continuously to maintain the negative charge that is lost when the air is breathed.

If it is not possible to adequately ventilate a room, there are devices on the market which can help freshen the air. These are devices that filter out pollutants and generate negative ions and release them into the air. These devices don’t replace the oxygen that is used up, however.

Many people live in areas where the quality of outdoor air is very low. Sometimes alerts are given that warn people who have poor lung function to stay inside. In such circumstances people have to use air filters and conditioners to purify air that comes into their homes. It would be better not to live in such a place, but sometimes it can’t be helped. One has to do the best he/she can in such circumstances.

The quality of indoor air often needs attention. Heating devices used in cold weather reduce the moisture in the air. This can cause the lining of the nose and throat to dry out and increase susceptibility to respiratory tract infections. Humidifiers can be used to add moisture to the air.

A common problem in many houses is growth of mold. This not only causes damage to the structure, but is also a health hazard. Some molds can be life-threatening. Mold develops in damp areas. Waterpipe leaks, leaks in roofs and around windows can occur. Bathtubs and washing machines can overflow. Improper construction methods can cause condensation to accumulate. Refrigerator drip pans and room air conditions are a frequent source of mold and need frequent cleaning.

If moisture needs to be removed from an area, the best approach is to take care of the source of the water. In some cases, walls, floors and ceilings that have gotten wet need to be replaced if they can’t be adequately dried. Dehumidifiers  can be a help.

Another source of indoor air pollution is the various chemicals that are stored in the house. This includes personal care products, bug sprays, many kinds of aerosols, paint and gasoline. Read the labels on all products brought into the house and choose only the healthful ones. Gasoline, paint and insecticides should not be stored in the house, but should be in a storage area separate from the house.

Carpets and carpet padding often contain harmful chemicals. In addition, they can harbor dust, mold and other toxic substances. Solid wood floors are better than carpets.

So-called air fresheners usually contain harmful chemicals. They work by decreasing your sense of smell, not by eliminating the offensive odor itself.

These are just a few of the many things to think about regarding the air we breathe every day. It will help us realize how important to our health clean, fresh air is and some of the things we can do to help improve the quality of our air.