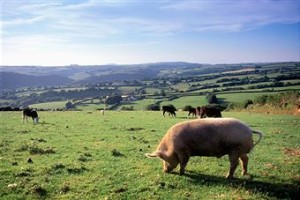 Do you think, brother, that in God’s great plan
When He was prescribing the best food for man,

Think he made a mistake in leaving the swine out
For he was not good from his tail to his snout?

Oh, the carcass of an old dead horse or a cow
Don’t get too rotten for a dirty old sow;

Though we holler a lot about boils and gout
We eat Miss Piggy from her tail to her snout.

We couldn’t eat the buzzard, we’d think it a crime,
But how much more filthy is he than the swine

That we make into pie, or we cook him with kraut
And eat him or die, from his tail to his snout?

We cook him with cabbage or boil him with greens,
With his mangy old hide we season our beans;

With his scabs and his boils within and without
Sweet Piggy we eat from his tail to his snout.

On filth they feast, while in stink-holes they lay
And still for their carcass our money we pay;

The preacher, professor, or the judge on his bench
Eat the carrion-eater, his filth, and his stench.

In the filth you can see him clear up to his eyes
His slimy old carcass all covered with flies;

Most dead with cholera (due to butcher, no doubt),
We still think him good from tail to snout.

We eat the old grunter, we eat the young shoat;
The fat that we fancied may be pus or bloat;

It would smell as good, and as healthy no doubt
As the hoofs and the hide, the tail and the snout.

Just as well eat the buzzard, the owl or the bat,
The lizard or the snake, the mouse or the rat.

Our most sensitive natures would almost run wild
If we handled the corpse of a man or a child,

But we sit at our table and cram down our throat
With the greatest relish—the corpse of a shoat.

God made him a scavenger, He says he’s unclean;
What other creature is as filthy and mean?

If we eat his flesh, or touch his dead carcass
With sin and disease it surely will mark us.

‘Tis sad, brother, although God’s Word is just,
We eat the slop-eater, for eat him we must;

The dirtiest of beast we will not do without,
But eat them we will, from the tail to the snout.

Now we sing and we talk of God’s love so divine;
Like vultures, then feast on the dirty old swine.

We might shun many ills, and diseases, no doubt,
By not eating him—from his tail to his snout.

Yes, we worship the Lord, and pray and shout,
But that old hog flavor we can’t do without;

For ham, bacon, and sausage, we go the whole route
And eat the whole hog from his tail to his snout.

In God’s Word we find he is classed with the dog,
No matter how highbred he still is a hog.

Though you wash him, or teach if you will,
He still will go back to his mire and his swill.

We’d be better off if we obeyed God’s command,
And ate vegetables, grain and fruit of the land,

Then it wouldn’t take half of the tonic and pills
To relieve all mankind of their swine-fed ills.

You may think of fresh pork as a very rare treat
But our bodies are made of just what we eat,

And the food he has eaten, the filth of the land,
Goes into our body as food, second-hand.

No wonder we are weak and heart beats are slow,
Sanitariums full, hospitals o’erflow,

For we eat such unclean, abominable things
That are creeping, crawling, or flying with wings.

God forbade us to eat these dirty old creatures,
No matter what is the theory of preachers;

If left to man’s opinion—we’d not know the right,
But thank the Lord, in His Word there is light.

And now, my brother, you may no doubt recall—
Indulgence of appetite caused Adam’s fall.

Our Saviour was tempted on this point, no doubt
Then why do we eat from his tail to his snout?

Now I’ve told you my story, recited my piece;
If you can eat pork with your conscience at ease,

If sin, filth, or disease, you care little about—
Keep on eating the brute, from his tail to his snout.

The author of this poem wrote:

A returned Missionary Baptist Minister with ten letters after his name, writes me upon receiving the poem, “From His Tail to His Snout,” as follows:

“Literature received, glad to get it. Forty-five years ago when in Inland China I saw hogs eating dead children. At once I ceased eating hog, my stomach trouble, dyspepsia and indigestion disappeared, so that was proof positive what caused it. So I say to people, ‘If you want cancer for breakfast, rheumatism for dinner and tuberculosis for supper eat hog.’ I don’t want any for God classed it with rats and mice. I am often asked. ‘What do you season with?’ We use vegetable shortening; it’s cheaper and better. Long may you live and scatter the truth.”