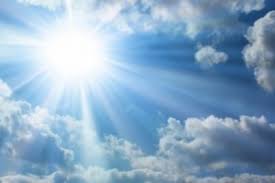 Welcome once again from the Ministry of Healing and Restoration. This month’s topic is a very important one: we will be discussing air and oxygen. Air is the most vital element for the human body. You can go many weeks without food, maybe a week or so without water, but only a few minutes without air. Oxygen (which is the vital component in air) plays many major roles in the body. Oxygen is vital to the function and life of each cell in our bodies.

One of the main functions of oxygen at the cellular level is cell respiration. Our cells have a power plant called the mitochondria, that is responsible for converting the majority of glucose to ATP (adenosine triphosphate). This process is an aerobic process, meaning oxygen must be present for it to convert correctly.

Once glucose enters the cell it is broken down by a series of enzymatic steps into various compounds. Initially this is done without the use of oxygen, hence the name anaerobic glycolysis. If oxygen is not eventually supplied to the cell, the reaction will end by producing large amounts of lactic acid the substance that causes muscles to fatigue and ache with strenuous exercise. But should oxygen be supplied, the reaction enters a new phase. Here the end product of glycolysis spins through a cycle of biochemical reactions known as the Krebs’s cycle with the resulting release of enormous amounts of energy. (Excitotoxins, by Russell Blaylock)

Now the anaerobic part of this process renders two ATP molecules, however when enough oxygen and proper enzymes are present the aerobic portion of glycolysis will render up to 34 ATP per molecule of glucose, which is truly a large amount of energy. Another major advantage is that the “cleaner” the burn of the glucose into ATP, the less byproduct your body has to deal with as far as waste material. You could compare this whole process to a car with a “tuned up” engine as opposed to one with a clogged up engine. The results are very similar. The cleaner the burn the better your car runs with less maintenance.

Another important function of oxygen is as a “free radical” used by the body to destroy foreign elements in the body. A healthy human cell operates at a very high level of efficiency. Properly nourished, it provides itself with an antioxidant protective coating that will not be damaged by oxygen, especially the more unstable forms such as O1 and O3 oxygen. When oxygen is needed the cell membrane will open the calcium ionic channel and draw in what is necessary. Viruses, bacteria, and other foreign elements, however, are usually far less protected from the unstable oxygen molecule and, therefore, will become oxidized when brought in contact with oxygen. For this reason oxygen is an excellent support for the body to fight infection and disease.

Studies seem to indicate that after the flood of Noah’s day, the oxygen content in the atmosphere reduced on average at least 5%. For the point of illustration let’s say the oxygen content dropped from 26% to 21% after the flood (through my research I find these numbers to be close to correct although I’m not trying to make a scientific claim). This could be one of the reasons that man’s life-span has shortened so much since the flood. There is simply not an optimal amount of oxygen in the atmosphere. Now let’s consider people who smoke and people who live in the polluted cities, breathing the further oxygen-depleted air (not to mention all the toxins that have taken its place). In big cities the oxygen content can easily drop into the teens. This could put the body in an extremely compromised condition at the cellular level, at least where oxygen is concerned. Is it any wonder that we have an increasing number of viral diseases, sicknesses, and a lack of energy in so many people today? If we are not eating the right food and breathing enough oxygen our bodies are surely going to reap the dismal results. The body needs OXYGEN.

Here are some tips to safely increase oxygen levels.

Whatever the case may be, all evidence indicates that increased oxygen levels translate into more favorable health. When studying health it is beneficial to look at things from the cellular level because healthy cells mean healthy tissue, healthy tissue means healthy organs, and healthy organs mean a healthy body. Therefore, if you’re taking care of your body’s needs at the cellular level, than you are much more likely to be a healthy person (with the exception of trauma and injury).

(The above article was provided by Curtis Kline, Director of Ministry of Healing and Restoration, Canvas, WV. For more in-depth information he can be contacted at (304) 872-4463 or curkli@yahoo.com. While we believe the principles in this article can be helpful, we are not responsible for any negative effects resulting from the use of remedies or recommendations herein. Use them at your own risk.    Editor)