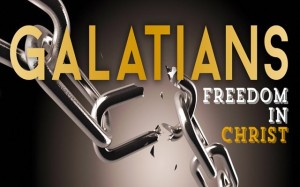 “Christ hath redeemed us from the curse of the law, being made a curse for us: for it is written, Cursed is everyone that hangeth on a tree: that the blessing of Abraham might come on the Gentiles through Jesus Christ; that we might receive the promise of the Spirit through faith.” (Galatians 3:13)

Thus the heavenly recorders do not need to write out a statement of each particular sin of every man, but simply to indicate on the roll that pertains to each man the particular commandment which is violated in each transgression. That such a roll of the law does go with every man wherever he goes and even abides in his house is plain from the next words: “I will bring it forth, saith the Lord of hosts and it shall enter into the house of the thief and into the house of him that sweareth falsely by my name and it shall remain in the midst of his house.” And unless a remedy shall be found, there that roll of the law will remain until the curse shall consume that man, and his house “with the timber thereof and the stones thereof”; that is, until the curse shall devour the earth in that great day when the very elements shall melt with fervent heat. For “the strength of sin” and the curse “is the law.” (1 Corinthians 15:56)

But thanks be to God, “Christ hath redeemed us from the curse of the law, being made a curse for us.” All the weight of the curse came upon Him, for “the Lord hath laid on him the iniquity of us all.” (Isaiah 53:6) He was made “to be sin for us, who knew no sin.” (2 Corinthians 5:21) And whosoever received Him, receives freedom from all sin and freedom from the curse because free from all sin.

So entirely did Christ bear all the curse, that, whereas, when man sinned, the curse came upon the ground, and brought forth thorns and thistles (Genesis 3:17, 18), the Lord Jesus, in redeeming all things from the curse, wore the crown of thorns and so redeemed both man and the earth from the curse. Bless His name. The work is done. “He hath redeemed us from the curse.” Thank the Lord. He was made a curse for us, because He did hang upon the tree.

And since this is all an accomplished thing, freedom from the curse by the cross of Jesus Christ is the free gift of God to every soul on the earth. And when a man receives this free gift of redemption from all the curse, that roll still goes with him; yet, thank the Lord, not carrying a curse any more, but bearing witness to “the righteousness of God which is by faith of Jesus Christ unto all and upon all them that believe: for there is no difference.” (Romans 3:21, 22) For the very object of his redeeming us from the curse is “that the blessing of Abraham might come on the Gentiles through Jesus Christ.” That blessing of Abraham is the righteousness of God, which, as we have already found in these studies, can come only from God as the free gift of God, received by faith.

And “as many as are of the works of the law are under the curse”; (Galatians 3:10) and as “Christ hath redeemed us from the curse of the law,” then He has also redeemed us from the works of the law, which, being only our own works, are only sin, and has, by the grace of God, bestowed upon us the works of God, which, being the works of faith, which is the gift of God, is only righteousness, as it is written: “This is the work of God, that ye believe on Him whom He hath sent.” (John 6:29) This is rest indeed—heavenly rest—the rest of God. And “he that entered into his rest, he also hath ceased from his own works, as God did from his.” (Hebrews 4:10)

Thus “Christ hath redeemed us from the curse of the law” and from the curse of our own works that the blessing of Abraham, which is the righteousness and the works of God, “might come on the Gentiles through Jesus Christ.” And all this in order “that we might receive the promise of the spirit through faith.” (Galatians 3:14) And “there is therefore now no condemnation to them which are in Christ Jesus, who walk not after the flesh but after the Spirit. For the law of the Spirit of life in Christ Jesus hath made me free from the law of sin and death.” And “what the law could not do, in that it was weak through the flesh, God sending his own Son in the likeness of sinful flesh and for sin condemned sin in the flesh, that the righteousness of the law might be fulfilled in us, who walk not after the flesh but after the Spirit.” (Romans 8:1-4)

(This article was first printed in the December 19, 1899, issue of The Review and Herald. It is also found on pages 124-126 of the book Lessons on Faith by A. T. Jones and E. J. Waggoner. I italicized Bible verses, capitalized some pronouns and added some verse references that were left out in the original.    Editor)