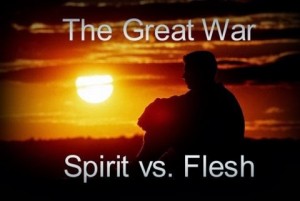 “This I say then, Walk in the Spirit, and ye shall not fulfill the lust of the flesh. For the flesh lusteth against the Spirit and the Spirit against the flesh and these are contrary the one to the other, so that ye cannot do the things that ye would. But if ye be led of the Spirit, ye are not under the law.” (Galatians 5:16-18)

Note that, in the text of Galatians now under consideration and its kindred texts in Romans and also in Colossians, it is stated in words and constantly held in view that the flesh, in its true fleshly sinful nature, is still present with him who has the Spirit of God and that this flesh is warring against the Spirit.

That is, when a man is converted and is thus brought under the power of the Spirit of God, he is not so delivered from the flesh that he is actually separated from it with its tendencies and desires so that by the flesh he is no more tempted and that with it he has no more contest. No, that same degenerate, sinful flesh is there with its same tendencies and desires. But the individual is no longer subject to these. He is delivered from subjection to the flesh with its tendencies and desires and is now subject to the Spirit. He is now subject to a power that conquers, brings under, crucifies, and keeps under, the flesh, sinful as it is, with all its affections and lusts. Therefore, it is written that “ye through the Spirit do mortify the deeds of the body.” (Romans 8:13) “Mortify therefore your members which are upon the earth; fornication, uncleanness, inordinate affection, evil concupiscence, and covetousness, which is idolatry.” (Colossians 3:5) Note that all these things are there in the flesh and would live and reign if the flesh were to rule. But since the flesh itself is brought into subjection to the power of God, through the Spirit, all these evil things are killed at the root and thus prevented from appearing in the life.

This contrast between the rule of the flesh and the rule of the Spirit is clearly shown in Romans 7:14-24 and in 1 Corinthians 9:26, 27. In the seventh of Romans is pictured the man who is under the power of the flesh, “carnal, sold under sin,” (Romans 7:14) who longs to do good and wills to do good but is subject to a power in the flesh that will not let him do the good that he would. “For the good that I would I do not, but the evil which I would not, that I do.” (Romans 7:19) “I find then a law, that, when I would do good, evil is present with me. For I delight in the law of God after the inward man; but I see another law in my members warring against the law of my mind and bringing me into captivity to the law of sin which is in my members. O wretched man that I am! Who shall deliver me from the body of this death?” (Romans 7:21-24) That describes the man who is subject to the flesh, “to the law of sin” that is in the members. And when he would break away from the power of the flesh and would do good, that power still brings him into captivity and holds him under the dominion of the flesh, the law of sin, which is in his members.

But there is deliverance from that power. Therefore, when he cries out, “O wretched man that I am! who shall deliver me from the body of this death?” there is given instantly the answer: “I thank God through Jesus Christ our Lord.” (Romans 7:25) There is the way of deliverance, for Christ alone is the Deliverer.

And now this man, though he is thus delivered, is not delivered from a contest; he is not put into a condition where he has no fighting to do with the flesh. There is a fight still to be carried on and it is not a make-believe fight. It is not the fighting of a phantom. Here is the man of 1 Corinthians 9:26, 27: “So fight I, not as one that beateth the air.” What does he fight? What does he beat? Read: “But I keep under my body and bring it into subjection: lest that by any means when I have preached to others, I myself should be a castaway.”

This is made yet more expressive by the fuller rendering of the Greek word translated “keep under,” in 1 Corinthians 9:27: “I keep under my body.” It means, literally, “to strike under the eyes, hit and beat the face black and blue.” Accordingly, Conybeare and Howson translate this passage thus: “I fight not as the pugilist who strikes out against the air, but I bruise my body and force it into bondage.”

Thus the seventh of Romans shows the man subject to the power of the flesh and the law of sin that is in the members, but longing for deliverance. The ninth of first Corinthians shows the flesh subject to the man through the new power of the Spirit of God. In the seventh of Romans, the flesh is ruling and the man is under. In the ninth chapter of first Corinthians, the man is ruling and the flesh is under.

And this blessed reversal of things is wrought in conversion. By conversion the man is put in possession of the power of God and under the dominion of the Spirit of God so that by that power he is made ruler over the flesh with all its affections and lusts and through the Spirit he crucifies the flesh with the affections and lusts in his fighting “the good fight of faith.” (1 Timothy 6:12)

If men were to be saved by being delivered utterly from the flesh just as it is, then Jesus need never have come to the world. If men were to be saved by being delivered from all temptation and set in a realm of no temptation, then Jesus need not have come into the world. But never, by any such deliverance as that, could man have developed character. Therefore, instead of trying to save men by delivering them utterly from the flesh just where they were, Jesus came to the world and put himself IN THE FLESH just where men are and met that flesh JUST AS IT IS, with all its tendencies and desires, and by the divine power which he brought by faith, He “condemned sin in the flesh” (Romans 8:3) and thus brought to all mankind that divine faith which brings the divine power to man to deliver him from the power of the flesh and the law of sin, just where he is, and to give him assured dominion over the flesh, just as it is.

Instead of Jesus’ trying to save men in a way in which they would be limp and characterless by setting them in a realm of no temptation, He came to man just where man is in the midst of all his temptations. Jesus came in the very flesh such as man has and in that flesh He met all the temptations known to that flesh and conquered every one of them, and by that conquest brought victory to every soul in the world. Bless His name.

And every soul can have in its fullness that victory, who will receive and keep “the faith of Jesus.” (Revelation 14:12) For “this is the victory that overcometh the world, even our faith.” (1 John 5:4)

(This article was first printed in the September 18, 1900 issue of The Review and Herald. It is also found on pages 132-136 of the book Lessons on Faith by A. T. Jones and E. J. Waggoner. I italicized Bible verses, capitalized some pronouns and added some verse references that were left out in the original.    Editor)