“But the fruit of 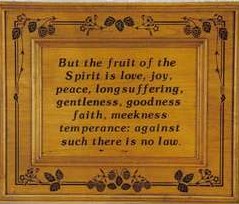 the Spirit is love, joy, peace, longsuffering, gentleness, goodness, faith, meekness, temperance; against such there is no law. And they that are Christ’s have crucified the flesh with the passions and lusts. If we live in the Spirit, let us also walk in the Spirit. Let us not be desirous of vainglory, provoking one another, envying one another.” (Galatians 5:22-26)

We have seen somewhat of the essential evil and deceitfulness of the works of the flesh. But, thank the Lord, there is a better picture.

And though it be true “that they which do such things” as are described in the list of the works of the flesh, “shall not inherit the kingdom of God,” (Galatians 5:21) yet in the gift of the Holy Spirit, through the grace of Christ, God has made full provision by which every soul, in spite of all the passions, lusts, desires, and inclinations of the flesh, can “inherit the kingdom of God.”

He was “touched with the feeling of our infirmities,” because He “was in all points tempted like as we are.” When He was tempted, he felt the desires and the inclinations of the flesh, precisely as we feel them when we are tempted. For “every man is tempted when he is drawn away of his own lusts [his own desires and inclinations of the flesh] and enticed.” (James 1:14) All this Jesus could experience without sin, because to be tempted is not sin. It is only “when lust hath conceived,” (James 1:15) when the desire is cherished, when the inclination is sanctioned—only then it is that “it bringeth forth sin.” And Jesus never even in a thought cherished a desire or sanctioned an inclination of the flesh. Thus in such flesh as ours He was tempted in all points as we are and yet without a taint of sin.

And thus, by the divine power that he received through faith in God, He, in our flesh, utterly quenched every inclination of that flesh and effectually killed at its root every desire of the flesh and so “condemned sin in the flesh.” (Romans 8:3) And in so doing He brought complete victory and divine power to maintain it to every soul in the world. All this He did “that the righteousness of the law might be fulfilled in us, who walk not after the flesh but after the Spirit.” (Romans 8:4)

This victory in its fullness is free to every soul in Christ Jesus. It is received by faith in Jesus. It is accomplished and maintained by “the faith of Jesus,” (Romans 3:22; Galatians 2:16) which He has wrought out in perfection and has given to every believer in Him. For “this is the victory which overcometh the world, even our faith.” (1 John 5:4)

He “abolished in his flesh the enmity,” in order “that he might reconcile both” Jew and Gentile—all mankind who are subject to the enmity—“unto God in one body by the cross, having slain the enmity in himself.” (Ephesians 2:16), margin. “The enmity” was “in himself” by being “in his flesh.” And there “in his flesh” He slew it and abolished it. And He could do this only by its being indeed “in his flesh.”

Thus Jesus took upon Him the curse in all its fullness, precisely as that curse is upon mankind. This He did by “being made a curse for us.” (Galatians 3:13) but “the curse causeless shall not come” (Proverbs 26:2) and never came. The cause of the curse is sin. He was made a curse for us, because of our sins. And to meet the curse as it is upon us, He must meet sin as it is in us. Accordingly, God “hath made him to be sin for us, who knew no sin” and this “that we might be made the righteousness of God IN HIM.” (2 Corinthians 5:21)

And though He thus placed Himself entirely at the same great disadvantage as are all mankind—made in all points like us and so “in all points tempted like as we are”—yet not a single tendency or inclination of the flesh was ever allowed the slightest recognition, even in thought; but every one of them was effectually killed at the root by the power of God, which, through divine faith, He brought to humanity.

And thus, “as the children are partakers of flesh and blood, he also himself likewise took part of the same, that through death he might destroy him that had the power of death, that is, the devil; and deliver them who through fear of death were all their lifetime subject to bondage. For verily he took not on him the nature of angels; but he took on him the seed of Abraham. Wherefore in all things it behooved him to be made like unto his brethren, that he might be a merciful and faithful high priest in things pertaining to God, to make reconciliation for the sins of the people. For in that he himself hath suffered being tempted, he is able to succor them that are tempted.” (Hebrews 2:14-18)

And this victory which Christ wrought out in human flesh is brought by the Holy Spirit to the rescue of everyone in human flesh who today believes in Jesus. For by the Holy Spirit the very presence of Christ Himself comes to the believer, for it is His constant desire to “grant you, according to the riches of his glory, to be strengthened with might by his Spirit in the inner man, that Christ may dwell in your hearts by faith, that ye, being rooted and grounded in love, may be able to comprehend with all saints what is the breadth, and length, and depth, and height, and to know the love of Christ which passeth knowledge, that ye might be filled with all the fullness of God.” (Ephesians 3:16-19)

Thus the deliverance from the guilt of sin and from the power of sin which holds the believer in triumph over all the desires, the tendencies and inclinations of his sinful flesh, through the power of the Spirit of God—this is wrought today by the personal presence of Christ Jesus in human flesh in the believer, precisely as it was wrought by the personal presence of Christ in human flesh eighteen hundred and seventy years ago.

Christ is ever the same—“the same yesterday and today and forever.” (Hebrews 13:8) The gospel of Christ is ever the same—the same yesterday and today and forever. The gospel of Christ today is the same that it was eighteen hundred and seventy years ago. Then it was “God manifest in the flesh,” (1 Timothy 3:16) and today it is the same—“God manifest in the” same flesh, the flesh of sinful men, human flesh, just as human nature is.

And the fruit of the Spirit is—

LOVE—the love of God which is shed abroad in the heart by the Spirit of God. And instead of hatred or any of its kin ever being allowed, even in thought, no man can possibly do anything to you that can cause you to do anything but love him. For this love, being the love of God, is “the same yesterday and today and forever” (Hebrews 13:8) and loves not for reward but for the mere sake of loving; it loves simply because it is love and being only that, it cannot do anything else.

PEACE—perfect peace that rules in the heart—“the peace of God which passeth all understanding,” (Philippians 4:7) and which “keeps the heart and mind” of him who has it.

LONGSUFFERING, GENTLENESS, GOODNESS, FAITH—This faith— pistis, Greek—is “firm persuasion; the conviction which is based upon trust, NOT upon knowledge [the faith of ‘the heart,’ not of the head; the faith of Christ, not of the creed]; a firmly relying confidence cherished by conviction and bidding defiance to opposing contradictions.”

MEEKNESS, TEMPERANCE—Temperance is self-control. Thus, the Spirit of God delivers the man from subject to his passions, lusts and habits, and makes him a free man, master of himself.

(This article was first printed in the October 2, 1900 issue of The Review and Herald. It is also found on pages 137-141 of the book Lessons on Faith by A. T. Jones and E. J. Waggoner. I italicized Bible verses, capitalized some pronouns and added some verse references that were left out in the original.    Editor)