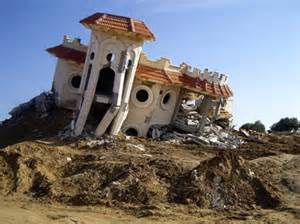 The builders of Babel became disorderly and the tower fell.

Do you have it in your home?

Many a young man has enlisted in the military service thinking to escape from the rules of his father. However, very quickly he finds out that he cannot escape rules. Rules, rules, rules; life is full of rules!

Every army must have order to be successful. Did you know that God’s army, His church, is to have gospel order? The Apostle Paul clearly defines the basis of gospel order. Writing to the church at Corinth, he states:

The man is to acknowledge Christ as his Lord and Master; the woman, while recognizing the supremacy of Christ as Lord over all, is required to acknowledge that in domestic life she is placed under the guidance and protection of man. Christ is represented as recognizing God as head. Let us look at this order in more detail.

“The head of every man is Christ”

The Bible clearly explains why man should allow the divine Son of God to be his head. First, the Bible teaches that God created this world, including man, by His Son.

Paul wrote that God, “Hath in these last days spoken unto us by his Son, whom he hath appointed heir of all things, by whom also he made the worlds.” (Hebrews 1:2)

The creature always owes its creator worship and allegiance. So Christ is our head by virtue of His being our Creator.

Second, Jesus is our head because He is our Redeemer! After sin, Satan claimed mankind as his subjects. God would buy back His creation by sending His divine Son to die for man and redeem him from the devil:

“But when the fulness of the time was come, God sent forth his Son, made of a woman, made under the law, To redeem them that were under the law, that we might receive the adoption of sons.” (Galatians 4:4, 5)

Because of His loving sacrifice for man, God has decreed, “That at the name of Jesus every knee should bow, of things in heaven, and things in earth, and things under the earth. And that every tongue should confess that Jesus Christ is Lord, to the glory of God the Father.” (Philippians 2:10, 11)

All service and submission in true gospel order is totally voluntary. Christ forces no man to obey Him. He simply says, “Follow me.” Isaiah wrote of Christ: “He shall feed his flock like a shepherd: he shall gather the lambs with his arm, and carry them in his bosom, and shall gently lead those that are with young.” (Isaiah 40:11)

“The head of the woman is man”

Before sin, perfect love reigned between Adam and Eve. Sin destroyed the perfect order of Eden and confusion dominated. God saw the necessity, for the good of both the man and woman, of having the man lead the woman. God told Eve: “… thy desire shall be to thy husband, and he shall rule over thee.” (Genesis 3:16)

Paul wrote: “But I suffer not a woman to teach, nor to usurp authority over the man.” (1 Timothy 2:12) “Wives, submit yourselves unto your own husbands, as unto the Lord. For the husband is the head of the wife, even as Christ is the head of the church: and he is the saviour of the body. Therefore as the church is subject unto Christ, so let the wives be to their own husbands.” (Ephesians 5:22-24)

Please note that this dependence does not in any way imply the slightest degree of degradation. Even among equals there is a head. A committee of people of equal rank still selects a chairman. In verse 21 Paul writes: “Submitting yourselves one to another in the fear of God.” The husband and wife are to work as a team making the decisions of life for the family together. Yet, when they cannot reach an agreement after praying for the wisdom of God, the wife is to submit to the decision of the husband. This she will do  willingly if the husband has loved her “as Christ also loved the church.” (Verse 25) She will find it easy to respect the decisions of her husband when he respects her as his divinely appointed partner and not some doormat to be trampled upon.

God does not tell husbands to order their wives. Instead He commands husbands, “love your wives.” (Verse 25) Husbands are “to love their wives as their own bodies.” (Verse 28)

The analogy of the church being a bride to Christ is quite important for husbands to understand. Christ loved the church and gave Himself for it. Jesus is worthy of the love and devotion of the church. Only as the husband loves his wife as Jesus loves the church, will she joyfully submit to him.

“The Head of Christ is God”

It may at first seem odd that Paul would write that God is the head of Christ. The most popular conception of the Godhead teaches that there are three, eternal, totally equal beings: God the Father, God the Son, and God the Holy Spirit. This teaching is usually called the Trinity. If the Father and His Son are totally equal, why is Christ said to be subordinate to the Father? Does the Bible really teach one God in three persons, the Trinity?

Let us notice some very clear statements from the Scriptures. “But to us there is but one God, the Father, of whom are all things, and we in him; and one Lord Jesus Christ, by whom are all things, and we by him.” (1 Corinthians 8:6) Paul says that there is “one God,” not Father, Son, and Holy Spirit, but “the Father.” He says we have “one Lord Jesus Christ.” Paul, writing to Timothy, declared: “For there is one God, and one mediator between God and men, the man Christ Jesus.” (1 Timothy 2:5) Jesus is not said to be the“one God,” but rather to be the “mediator between God and men.”

The confusion is partly due to the unscriptural belief that Jesus only became the Son of God during the incarnation at Bethlehem. This teaching is not to be found anywhere in the Bible. The eighth chapter of Proverbs speaks of Christ under the symbol of wisdom and clearly teaches that in eternity past, God brought forth His divine Son. (See verses 22-30.) Jesus said that“…God so loved the world, that he gave his only begotten Son, that whosoever believeth in him should not perish, but have everlasting life.” (John 3:16) If the Scriptures declare that God sent His Son into the world, then He had to have had a Son to send.

The basis of all earthly sons honoring their fathers is in the gospel order between our heavenly Father and His Son. Jesus acknowledged the Father as His God. “Jesus saith unto her[Mary], Touch me not; for I am not yet ascended to my Father: but go to my brethren, and say unto them, I ascend unto my Father, and your Father; and to my God, and your God.” (John 20:17) “And about the ninth hour Jesus cried with a loud voice, saying, Eli, Eli, lama sabachthani? that is to say, My God, my God, why hast thou forsaken me?” (Matthew 27:46) Paul called the Father “the God of our Lord Jesus Christ.” (Ephesians 1:3) To show the exalted position of Christ, Paul, writing in Hebrews, quotes Psalm 45:6, 7: “But unto the Son he saith, Thy throne, O God, is for ever and ever: a sceptre of righteousness is the sceptre of thy kingdom. Thou hast loved righteousness, and hated iniquity; therefore God, even thy God, hath anointed thee with the oil of gladness above thy fellows.” (Hebrews 1:8, 9) Jesus has “by inheritance obtained” the name “God.”(Hebrews 1:4, 8) However, while the Father is called the God of Jesus Christ, Jesus is never called the God of the Father!

Even though Christ has been elevated to sit equal with the Father on the throne of the universe, there is a willing subjection of the Son to His Father. When the great controversy is over and all sin destroyed, the Son turns everything over to the Father.

Knowing God and His only begotten Son is the basis of all gospel order. There is much more about the Bible teaching of gospel order. As the priest of the home, please write or call for more information.