Home > 2000 > April 00 > Authors > Bible Study > Law and Faith > Lynnford Beachy > Newsletters > Questions and Answers > Sabbath > Sabbath Q&A > How can I be sure that the Sabbath and the seventh day are the same? 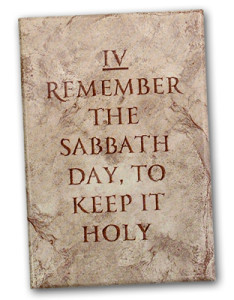 “How can I be sure that the Sabbath and the seventh day are the same?”

The verses mentioned above should be sufficient to answer this question also. However there may still be some question about whether the day we know of as the seventh day of the week is in reality the same Sabbath day mentioned in the Bible.

There is no scientific reason for the weekly cycle. The second, minute, and hour are divisions of a day. A day is determined by the rotation of the earth. A month is determined by the cycle of the moon. A year is determined by the rotation of the earth around the sun, but there is no scientific reason for the weekly cycle. Yet in virtually every country and language there remains a seven-day week. There is no record that this seven-day weekly cycle has ever changed. The evidence from nearly every language under the sun substantiates this fact. If the weekly cycle had been changed by anyone there would be no way that every language and country would still maintain the same seven-day weekly cycle. In recent years there have been a few countries attempting to use a new calendar that makes it appear as if Sunday is the seventh-day of the week. However the evidence of many languages which still maintain a number as the name of the each day, instead of the Roman names, proves the falsehood of such an attempt. For example many African languages still call Sunday “day one.”

If there had been a change in the seven-day weekly cycle it would be virtually impossible to have that change implemented in all these countries who speak many different languages. If there had been a change made in the first four thousand years of earth’s history, surely Jesus would have informed us of such a change. Yet it is clear that He made no mention of a change. In fact it was His custom to keep the seventh day of the week as the Sabbath. “And he [Jesus] came to Nazareth, where he had been brought up: and, as his custom was, he went into the synagogue on the sabbath day, and stood up for to read.” (Luke 4:16)

From Christ’s day to our day there is no record of any change made in the seven-day weekly cycle. The day that is known alone in many languages as the Sabbath is the same day of the week that we often call Saturday in English. This should be sufficient proof that the seventh-day of the week, known as Saturday, or the Sabbath, is in reality the same Sabbath day that God instituted at the creation of this world.    ?

We pray this new feature has been a blessing to you. If you have any questions you would like us to address in this section, please send them to the address below.