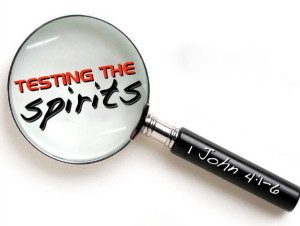 I am glad you brought that up. The verses read, “Hereby know ye the Spirit of God: Every spirit that confesseth that Jesus Christ is come in the flesh is of God: And every spirit that confesseth not that Jesus Christ is come in the flesh is not of God: and this is that spirit of antichrist, whereof ye have heard that it should come; and even now already is it in the world.” (1 John 4:2, 3) According to John, the spirit of antichrist denies that Christ is come in the flesh. John also wrote, “Who is a liar but he that denieth that Jesus is the Christ? He is antichrist, that denieth the Father and the Son. Whosoever denieth the Son, the same hath not the Father.” (1 John 2:22, 23) John said that the antichrist denies the Father and the Son and, from verse 23, we learn John was particularly focusing on the denial of the Son, which automatically denies the Father. The denial of the sonship of Christ goes hand in hand with the denial that He came in the flesh. These are the chief manifestations of the spirit of antichrist, according to the Scriptures.

It is quite interesting to note that when we look at history we find that the sonship of Christ was questioned at the Council of Nicea in 325 AD, and shortly thereafter the nature of Christ while He was a man came under question. Please notice: “The Arian controversy was chiefly waged over the question of the eternal generation of the Son,” or in other words, the meaning of the term begotten Son. (The Nicene and Post Nicene Fathers Second Series, Volume 9, Chapter 2, Introduction to St. Hilary of Poitiers)

“The Trinity and Christology, the two hardest problems and most comprehensive dogmas of theology, are intimately connected. Hence the settlement of the one was immediately followed by the agitation and study of the other. The speculations on the Trinity had their very origin in the study of the person of Christ, and led back to it again. The point of union is the idea of the incarnation of God. But in the Arian controversy the Son of God was viewed mainly in his essential, pre-mundane relation to the Father; while in the Christological contest the incarnate historical Christ and the constitution of his divine-human person was the subject of dispute… And now came into question, further, the relation between the divine and the human natures in Christ.” (Phillip Schaff, History of the Christian Church, Volume 3, pages 705-706)

In other words, the early Catholic theologians concluded that their denial of the literal sonship of Christ must logically be followed by a modified interpretation of what it means that Christ came in the flesh. These are the two theological signs of antichrist recorded in the Bible.

The primary conclusion the early Catholic theologians came to was that Christ, if He is an integral portion of the Most High God, then under no circumstances could He be separated from God or lose any of the abilities of God. Therefore, they concluded that while Christ was a man He was all powerful and all knowing, and could not completely die. This idea is still maintained by the large majority of Christian churches today.

Notice what one author said on this subject: “…though there are problems stemming from certain Scriptural statements concerning the human nature of Christ, there is considerable evidence that Christ retained omnipresence, omniscience, and omnipotence even while on earth.” (John F. Walvoord, Bibliotheca Sacra, Volume 118, No. 470, April 1961, page 102) I found this statement interesting because the writer candidly admits that this idea cannot be harmonized with all the Scriptures in the Bible. In fact, it cannot be found in the Bible at all. The “considerable evidence” he supposes proves this idea could be used just as convincingly regarding Peter, Paul, or many other Bible figures who performed miracles just as astounding as Christ’s.

One aspect of denying that Christ is come in the flesh is denying that He was “in all things… made like unto his brethren.” (Hebrews 2:17) However, there is another aspect that is sometimes overlooked, and that is the idea that Christ does not come in our flesh. This would deny that Christ dwells in us by His Spirit. Paul wrote, “Christ in you, the hope of glory.” (Colossians 1:27) He also wrote, “And because ye are sons, God hath sent forth the Spirit of his Son into your hearts, crying, Abba, Father.” (Galatians 4:6)

According to the Bible, the Spirit of Christ dwells in us directly and we can have direct fellowship with Christ. Yet there are some who deny this by saying Christ only dwells in us through another person known as “the Holy Ghost.” This would also deny that Christ is come in the flesh.