Question: How was tithe collected in 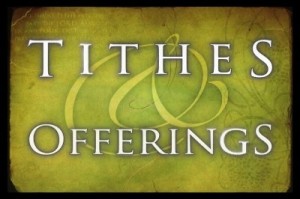 “How was tithing collected after the members were kicked out of the Jewish church for teaching Jesus?”

There is no specific instruction in the New Testament on how to collect tithes, yet there are some points to consider.

In his letter to the Corinthians, Paul wrote, “Now concerning the collection for the saints, as I have given order to the churches of Galatia, even so do ye. Upon the first day of the week let every one of you lay by him in store, as God hath prospered him, that there be no gatherings when I come. And when I come, whomsoever ye shall approve by your letters, them will I send to bring your liberality unto Jerusalem.” (1 Corinthians 16:1-3)

Here we read of a general contribution for the saints. This does not seem to be tithe but, rather, offerings to help the poor. Yet, it does show that offerings were received, and obviously used completely separate from the Jewish church.

Paul wrote, “Do ye not know that they which minister about holy things live of the things of the temple? and they which wait at the altar are partakers with the altar? Even so hath the Lord ordained that they which preach the gospel should live of the gospel.” (1 Corinthians 9:13, 14) Even though Paul was not part of the Jewish church, nor receiving tithe from them, he said that a preacher should live of the gospel or, in other words, he should receive the necessities of life from those to whom he ministers. “And let him who is instructed in the word share with him who is instructing—in all good things.” (Galatians 6:6—Young’s Literal Translation)

From the writings of the New Testament, we cannot find that there was one central location where all the tithe of Christians would go, and then from there to be distributed back to the ministers. Many denominational churches today operate on this principle, but it does not seem to be the procedure followed by the apostolic church. Those who were ministered unto, gave a portion of their living directly to those who ministered unto them.