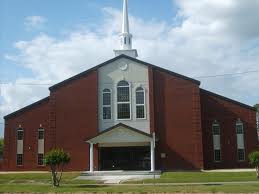 n February 16 the Indianapolis Baptist Temple was seized by United States Federal Marshals. U.S. District Judge Sarah Evans Barker in Indianapolis ordered the confiscation of the Temple claiming the church owed $6 million in taxes, penalties and interest for its failure to withhold employee income taxes, Social Security taxes and Medicare taxes. The judge had even authorized marshals to seize the property by force if necessary.

Judge Barker ordered that if the church did not comply with the court’s demands to pay certain taxes in question, then the church must vacate its property or it could be seized on November 14, 2000. On that date, the marshals seized the church parsonage a few miles from the church, but did not attempt to enter the church. This was due to the public support that the church was receiving not only from hundreds of its members, but also from hundreds of members of different militias from across the United States. The militia members were there to protest what many considered to be a grievous violation of constitutional rights.

As the weeks passed after November 14, the number of people who continued to hold a prayer vigil at the church became smaller. When the seizure took place there were fewer than a dozen people in the church holding a prayer service. Those who were at the building were removed peaceably by the marshals. According to CNN.com, dozens of marshals were employed in the seizure and there was even a helicopter hovering overhead.

According to Richard Hammar, an attorney for the Springfield, Missouri-based Assemblies of God Church and an expert on churches and tax law, this is the first time the federal government has ever seized a church for failing to pay taxes. “To have the IRS come in and seize the church’s property, that is an extraordinary event unparalleled in American history.” (cnn.com/2001/LAW/02/13/church.irs.ap/index.html)

The Background Leading up to the Extraordinary Events

Prior to 1986, the Indianapolis Baptist Temple operated as a non-profit 501(c)(3) religious organization under Title 26 of the Internal Revenue Code. Around 1984 the church members and the church leadership came to the understanding that such a partnership with the government was wrong, and, in fact, a betrayal of the gospel. When a church incorporates as a 501(c)(3) religious organization, it is, in effect, asking the government for permission to exist and function. The Bible teaches that this privilege has been granted to us by Christ, not the government. The churches that apply and are accepted as 501(c)(3) become registered churches.

What is the supposed advantage for churches to register and submit to the government requirements that come with it? Most comply because they desire their supporters to be able to receive receipts, for their gifts to the churches, that can be deducted from their federal income taxes. According to the tax code, to be able to give such a receipt, an organization must be 501(c)(3). (However, there is a little-known line in the tax code stating that churches, synagogues, and mosques are exempt from needing such status.) The reason the churches wish to be able to give out such receipts is plain. Money! More people are willing to give, and give more, if they can get a tax break for it.

A further complication develops when a 501(c)(3) church hires employees. The government requires that the employer withhold federal income and social security taxes (as well as paying one-half of the FICA tax) and forward that money to the IRS thus making the church function as an agent of the government.

Coming to this understanding of these and other issues, the Indianapolis Baptist Temple decided to dissolve the corporation that had been formed to become a 501(c)(3) church. After the corporation had dissolved, the members began what they described as a “New Testament Church” without any incorporation or government permission. To our knowledge, the Indianapolis Baptist Temple is one of the largest, if not the largest, non-501(c)(3) church in The United States.

Prior to this, while operating as a 501(c)(3) church, the Indianapolis Baptist Temple had paid taxes and reported to the government as required by the tax codes. After forming a “New Testament Church,” they adopted a Biblical approach. On their web site they state:

“A true New Testament Church is not an employer nor does it have employees. Neither is it a taxpayer. Those who serve the church are ministers exercising their gifts by the Holy Spirit. They receive love gifts, not wages.” (http://www.indianapolisbaptisttemple.com/realfacts.html)

After becoming a “New Testament Church,” the “ministers” of the Indianapolis Baptist Temple continued to pay their own personal income taxes as well as the full amount of their social security (FICA) taxes. However, the United States government was not content to allow this to continue. Even though the taxes were being paid, the government wanted the church to collect these taxes as well as pay one-half of the FICA taxes for the “ministers.” This the Indianapolis Baptist Temple could not conscientiously do. These are facts that most media sources have failed to mention. When the government says that the Indianapolis Baptist Temple owed taxes, what it means is that the taxes were not paid through the “proper channels” and they now not only want the 3.6 million dollars that they claim were to be paid, by and or through the church, but they also want 2.4 million dollars more in penalties and interest, making a total liability of 6 million dollars.

The membership and leadership of the Indianapolis Baptist Temple acknowledge that “Caesar” has a right to receive due taxes. However, they believe that that right is only upon the individual and not upon the church as a body. All of Christ’s counsel and Paul’s counsel on this subject are directed toward the individual.

Yet, this is not a tax case, but a First Amendment religious liberty issue! It is an issue of control and compliance. The government case demonstrates the Clinton/Reno Justice Department’s philosophy well: “Rule or Ruin”! Some were hopeful that the new Bush administration would be more favorable to the matter. However, that was a vain and sad expectation.

“‘The purge has started,’ said the Rev. Greg J. Dixon, the church’s pastor emeritus, as the marshals wheeled him out.

“‘We had a promise from the Bush administration. We had every reason to believe there was a moratorium.… They were going to dismiss the case. We had a deal, and they welshed on the deal,’ Dixon said.” (cnn.com/2001/LAW/02/13/church.irs.ap/index.html)

Some have questioned if the recent air strikes against Iraq ordered by President Bush were smokescreens to help take interest and media attention away from the Indianapolis Baptist Temple seizure.

This is perhaps the most important case of religious liberty in the United States in decades. This is the first time that any branch of the government has brought suit against a non-501(c)(3) church. All other lawsuits have been against state recognized and approved religious organizations: 501(c)(3) organizations.

One of the marshals stated that the seizure was one of the most difficult things he had ever done. Like Rome of old, they would claim that there was no persecution, they were merely enforcing the law. This brings to mind the U.S. Senate confirmation hearings of the U.S. Attorney General Ashcroft when he stated that his job would be to enforce the law.

The Bible teaches that the second beast of Revelation 13 would arise in the new world at just the time the United States of America was founded. This power would begin speaking like a lamb. It would be based on the principles of a republican government and protestant churches. However, this image would later speak as a dragon commanding the people to form an image to the first beast of Revelation 13 (the Papacy). Surely we are seeing the beginning of developments that inspiration tells us will happen very rapidly. It is beyond the scope of this article to detail these events. Those who wish to have more information on these prophetic events may request, free of any cost or obligation, a booklet entitled, A Time to Choose. This booklet covers the prophecies of Revelation 13 and 14 and clearly demonstrates that the Bible predicts that religious freedom in the United States is soon to end. Just as it was in Communist Russia, and is now in Communist China, churches in the United States will have to be registered and comply with the government to avoid the coming wrath. If you have not read A Time to Choose I want to earnestly encourage you to request a free copy today.

For those not knowledgeable or clear regarding Smyrna’s position on the matter of incorporation, we wish to clearly set forth our position. While not agreeing with all of the theology of the Indianapolis Baptist Temple, we do hold some similar concepts concerning church/state relations. Smyrna Gospel Ministries is an outreach ministry of Smyrna Sabbath Chapel. Neither the church, nor the ministry is a registered 501(c)(3) religious organization. We have not incorporated, nor do we intend to do so. The church does return tithes and love offerings to those who function in ministry as the church is able. The materials that we distribute have always been available free. For those who are able and wish to help with our expenses, we have published some of our costs of production so if those receiving materials would like to help, they know what our expenses have been.

We make a conscientious effort to carefully receipt, and be careful stewards of, the funds that God directs our way. As we noted earlier, the IRS tax code exempts “churches” from needing 501(c)(3) status for its receipts to be used for tax deduction purposes. While we may fall under this exemption, we do not encourage or endorse its use. History teaches us that when government provides favors, the price in the long run is much higher than the value of the favors.