The life of Christ was an ever-widening, shoreless influence, an influence that bound Him 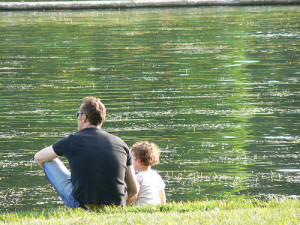 to God and to the whole human family. Through Christ, God has invested man with an influence that makes it impossible for him to live to himself. Individually we are connected with our fellow men, a part of God’s great whole, and we stand under mutual obligations. No man can be independent of his fellow men; for the well-being of each affects others. It is God’s purpose that each shall feel himself necessary to others’ welfare, and seek to promote their happiness.

Every soul is surrounded by an atmosphere of its own—an atmosphere, it may be, charged with the life-giving power of faith, courage, and hope, and sweet with the fragrance of love. Or it may be heavy and chill with the gloom of discontent and selfishness, or poisonous with the deadly taint of cherished sin. By the atmosphere surrounding us, every person with whom we come in contact is consciously or unconsciously affected.

This is a responsibility from which we cannot free ourselves. Our words, our acts, our dress, our deportment, even the expression of the countenance, has an influence. Upon the impression thus made there hang results for good or evil which no man can measure. Every impulse thus imparted is seed sown which will produce its harvest. It is a link in the long chain of human events, extending we know not whither. If by our example we aid others in the development of good principles, we give them power to do good. In their turn they exert the same influence upon others, and they upon still others. Thus by our unconscious influence thousands may be blessed.

Throw a pebble into the lake, and a wave is formed, and another and another; and as they increase, the circle widens, until it reaches the very shore. So with our influence. Beyond our knowledge or control it tells upon others in blessing or in cursing.

Character is power. The silent witness of a true, unselfish, godly life carries an almost irresistible influence. By revealing in our own life the character of Christ we co-operate with Him in the work of saving souls. It is only by revealing in our life His character that we can co-operate with Him. And the wider the sphere of our influence, the more good we may do. When those who profess to serve God follow Christ’s example, practicing the principles of the law in their daily life; when every act bears witness that they love God supremely and their neighbor as themselves, then will the church have power to move the world.

But never should it be forgotten that influence is no less a power for evil. To lose one’s own soul is a terrible thing; but to cause the loss of other souls is still more terrible. That our influence should be a savor of death unto death is a fearful thought; yet this is possible. Many who profess to gather with Christ are scattering from Him. This is why the church is so weak. Many indulge freely in criticism and accusing. By giving expression to suspicion, jealousy, and discontent, they yield themselves as instruments to Satan. Before they realize what they are doing, the adversary has through them accomplished his purpose. The impression of evil has been made, the shadow has been cast, the arrows of Satan have found their mark. Distrust, unbelief, and downright infidelity have fastened upon those who otherwise might have accepted Christ. Meanwhile the workers for Satan look complacently upon those whom they have driven to skepticism, and who are now hardened against reproof and entreaty. They flatter themselves that in comparison with these souls they are virtuous and righteous. They do not realize that these sad wrecks of character are the work of their own unbridled tongues and rebellious hearts. It is through their influence that these tempted ones have fallen.

So frivolity, selfish indulgence, and careless indifference on the part of professed Christians are turning away many souls from the path of life. Many there are who will fear to meet at the bar of God the results of their influence.

It is only through the grace of God that we can make a right use of this endowment. There is nothing in us of ourselves by which we can influence others for good. If we realize our helplessness and our need of divine power, we shall not trust to ourselves. We know not what results a day, an hour, or a moment may determine, and never should we begin the day without committing our ways to our heavenly Father. His angels are appointed to watch over us, and if we put ourselves under their guardianship, then in every time of danger they will be at our right hand. When unconsciously we are in danger of exerting a wrong influence, the angels will be by our side, prompting us to a better course, choosing our words for us, and influencing our actions. Thus our influence may be a silent, unconscious, but mighty power in drawing others to Christ and the heavenly world.