Home > 2004 > Authors > Bible Study > George McDaniel > Health > Newsletters > September 04 > Insulin resistance syndrome, a major cause of most of the chronic diseases of aging. 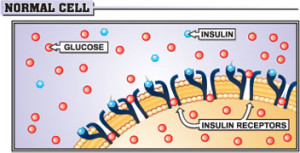 Insulin resistance syndrome, a major cause of most of the chronic diseases of aging.

One of the most important hormones produced by the body is insulin, because it is essential for the production of energy. Insulin is essential for transporting glucose through the cell membrane into the cell where it becomes the primary source of energy. This, however, is only one function of insulin. A person who loses his ability to manage insulin effectively can develop not only diabetes mellitus, but also many other symptoms. This series of articles will focus on what insulin does in the body and what results when insulin is not working as it should.

Some of the functions of insulin are:

Most people are aware that insulin lowers blood sugar. This is not its primary function, however, or even its intended function. Insulin is the only hormone that will decrease blood sugar. There are many that will raise blood sugar, including cortisol, glucagon and adrenaline. Now if something is important to the body we will have redundant mechanisms to support it. The fact that we have only one hormone that lowers sugar and several that raise it tells us that the body is not designed to deal with large amounts of sugar. Man’s original diet, given by God, consisted of fruits and seeds. Later were added green vegetables. Still later, after the flood, God gave man permission to eat flesh.

Our brain, nerves and red blood cells are the tissues that need glucose for energy. These are the cells that are very active metabolically. Muscle cells function better using fat for energy. This is especially true of the heart muscle, which needs a constant, steady supply of energy. Brain cells do not even need insulin to take in glucose. The major problem throughout most of human history has been to ensure an adequate supply of glucose to provide for the needs of the brain and nerves. That is why the body has several hormones to raise blood sugar but only one that can lower it.

What causes insulin resistance and why is it harmful?

Insulin resistance is caused by the exposure of cells to insulin. They are trying to protect themselves from the harmful effects of high insulin levels. They decrease the number of insulin receptors and regulate the activity of remaining receptors down to decrease the effect of insulin. It is somewhat like coming into a room with a bad odor. Pretty soon you don’t notice the odor. You have become desensitized. If you leave the room and come back in, you smell it again because you have become resensitized. As the cells are exposed to insulin they become a little bit resistant to it. To compensate, the pancreas puts out more insulin. Thus the cells become more and more resistant and the pancreas puts out more and more insulin.

Insulin resistance syndrome has not been a problem until recently. The changes in the American diet have caused the problem. Many of the foods we are used to eating contain a lot of starch. Starch is digested quickly and absorbed into the system as glucose. Just think how much of your diet is made up of wheat and flour products, rice, potatoes, and corn. When eating any type of grain, it is better to eat whole grains rather than refined, but the amount needs to be limited.

We have thought that carbohydrates should be divided into simple and complex. We have also thought that we should eat simple carbohydrates sparingly, but could eat most of our calories as complex carbohydrates. A hundred years ago and more, this wouldn’t be as bad as it is today. However, since the development of the refined and processed food industry, there is now available a great variety of refined complex carbohydrates that didn’t exist even fifty years ago. The way these products are advertised make them seem essential to our lifestyle.

A better way to consider carbohydrates is with fiber and without fiber. Fiber carbohydrates include vegetables that grow above ground, such as leafy vegetables, broccoli, cauliflower and asparagus. Non-fiber carbs have little or no fiber, such as potatoes, pasta, rice, etc. The fiber slows down the absorption of the sugar. Also, this type of food has fewer carbs. What the body experiences with non-fiber carbs is sugar. A potato is, to the body, just a big lump of sugar.

We will now consider what insulin does in the body and why too much can be harmful.

Relationship of insulin to life span and aging

We think of life span as being fixed. Humans, for instance, have an average life span of 76 years. The oldest known modern human was a French woman who recently died at age 122. If you read the obituaries in the newspaper, you will find many dying in their 50s, 60s and 70s. In lower forms of life, such as worms, life span depends on the environment. If there is plenty of food available, they will reproduce and die in a few weeks. If not, they can last until conditions are better, which may be as much as twenty years. It is now known that the variability in life span is regulated by insulin. Other lab studies done on animals such as rats and dogs, show that animals on calorie restricted diets live longer than those who eat whatever they want. Fifty-nine different species tested so far have responded to this anti-aging strategy. They not only live longer, but look and act younger. When food intake is cut by one third, the life span increases by one third. This would amount to an extra 25 years for humans.

Some people are following a very strict, low calorie diet called Cronie’s Diet, to accomplish longer life. There is an easier way to do this. This is to eat only nutrient-rich foods. Make sure each meal contains the nutrients you need. Avoid junk food. Stop eating before you feel full. Then fast for one or two days, once or twice a month. Fasting also provides the anti-aging benefits of increased production of human growth hormone, which declines rapidly after age 40.

There is a lot more that could be said about anti-aging, but it will have to wait for another time since this series of articles is about insulin resistance. The harmful effects of insulin resistance syndrome are due to abnormally high levels of insulin, due to eating too much high carbohydrate food.

After an ideal meal, blood glucose levels will rise slowly and moderately. Insulin will be released in amounts to metabolize and store the low levels of increased glucose in the blood, and then the amount of insulin in the blood will decrease to a very low level. Under these conditions, cells become insulin resistant slowly and only to a slight extent.

If one’s diet contains a lot of carbohydrates, particularly simple sugars and refined carbohydrates, the blood sugar level goes up rapidly and the pancreas releases a large amount of insulin to deal with what is perceived as an emergency situation. The sugar levels peak rapidly, due to the source of glucose. The pancreas has put out more insulin than needed, so the blood sugar drops below normal. The person then feels hungry and weak, so will have a snack to get him through to the next mealtime. This snack will probably be something high in sugar and starch, such as a doughnut or a sweet roll, and maybe a cup of coffee with sugar. The blood sugar will go up again, but will be low again before the next meal. This roller coaster effect causes the cells to be exposed to frequent high insulin levels. They become resistant so, in order for the body to stay in balance, the pancreas puts out more insulin to compensate. Eventually, it takes constant high insulin levels to get the glucose into the cells where it is needed for energy and to keep the blood sugar at normal levels.

If all the cells became resistant at the same time and to the same extent, there wouldn’t be as much of a problem. The difficulty is that all the cells don’t become resistant. The liver becomes resistant first, then muscle tissue, then the fat cells. The liver can manufacture glucose from certain amino acids by a process called gluconeogenesis. Insulin acts to suppress this process. The sugar in our blood, then, comes from two sources: the food we eat and the liver. The amount of sugar in the blood when we wake up in the morning is mostly sugar that the liver has made. Normally, it doesn’t make much sugar at night. If the liver becomes resistant to insulin, the restraint is removed and when we wake up in the morning our blood sugar is high. This is one cause for a high fasting blood sugar, which is a symptom of diabetes mellitus.

Some tissues don’t become resistant, such as the endothelium of the arteries. The importance of this will be seen later as we continue this series.