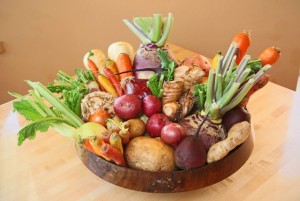 (Insulin resistance is caused by exposing the cells of the body to high levels of insulin. When this happens they become unable to respond normally to insulin. This is a recent development due to the modern diet of large amounts of refined carbohydrates. It is an important health issue because insulin has many functions in the body. As the cells become resistant, the pancreas puts out more insulin to compensate, and the cells respond by becoming more resistant. Eventually disease symptoms occur. If possible, read the previous two articles which help to lay a groundwork for this topic.)

The two previous articles have shown that insulin is one of the major hormones of the body and that an excess of insulin, caused by improper diet, can produce many harmful effects. The good news is that insulin resistance can be both prevented and cured. The two factors most closely related to insulin are diet and exercise.

There are two main reasons why we eat: First, to obtain energy; second, to gather up the building blocks for growth, maintenance and repair. (Pleasure is another reason but if we eat too much, or eat the wrong foods, we won’t have much long-lasting pleasure.)

For energy, the body can use glucose or fat. Certain tissues, primarily the brain, nerves, and red blood cells, need glucose for energy. Muscle cells can burn fat for energy. In fact, fat is the preferred source of energy for muscle cells.

The body can store only a small amount of sugar, in the form of glycogen, in the muscles and liver. In an active day, if a person had to rely on sugar alone for energy, he would probably die. The body stores excess fuel mainly in the form of fat. This is an indication that sugar was never meant to be the primary energy source. Glucose was meant to be primarily used as fuel in an emergency, where one needed to expend a large amount of energy in a short time. This is why adrenalin raises blood sugar levels.

In order to increase insulin sensitivity, we need to decrease the exposure of the cells to insulin. The first thing to do is stop the blood sugar rollercoaster. For those who may not have read the previous articles, let me explain that concept: When a person eats a meal high in refined carbohydrates, it is changed by the digestive process into glucose very rapidly. This large amount of glucose enters the blood very quickly and causes a rapid rise in the blood sugar. The pancreas sees this as an emergency and releases a large amount of insulin to take care of the problem. The amount of insulin is frequently more than is needed, so the blood sugar falls below normal. The person begins to feel weak and hungry, so he eats a high sugar snack. This raises the blood sugar again, the pancreas releases more insulin, and the process repeats itself several times a day.

This person will likely have breakfast, a mid-morning snack, lunch, a mid-afternoon snack, and then go home to a heavy supper. He feels so drowsy after this that he sits in a stupor in front of the TV until bedtime. He might then have a snack before going to sleep. It is not just adults who follow this pattern. Children at many schools also do. They have access to vending machines, and Mother is not there at lunchtime to tell them to eat their broccoli or peas. This type of lifestyle is what causes insulin resistance. In order to reverse it, a person has to change this lifestyle.

In order to reverse insulin resistance, a person will have to go on a low carbohydrate diet. The best place to begin is to totally eliminate all refined carbohydrates. It may also be necessary, for a time, to eliminate all high carbohydrate, low fiber, whole foods, such as potatoes and grains. This may be difficult. Some people actually become addicted to sugar. It causes the release of serotonin in the pleasure centers of the brain. We tell children to “just say no” to drugs, so we can tell ourselves, “just say no” to sugar. All carbohydrates are turned into sugar in the body.

I realize that whole grains are a source of B vitamins, fiber, amino acids, and fats. It is also true that modern grains are different from grains of a few generations ago. They have been hybridized to produce greater yields per acre. One of the effects of this is a grain that has more carbohydrate.

Another thing to avoid is fruit juice. It is very easy to get a large dose of sugar from drinking juice. Also avoid eating cooked fruit. Eat raw fruit if possible, but limit the amount eaten. Raw fruit contains fiber that will help slow down the process of digestion. Many fruits are also high in antioxidant compounds, especially berries.

There is also a class of sugars that we have just recently become aware of that play an important role in health. Before the advent of food processing, they were widely present in the diet. The refining process removes them to a great extent. These include the commonly available glucose and galactose, as well as lesser-known sugars such as xylose, fucose, mannose, and neuraminic acid. I will have to save further information on this for a future article.

There was an experiment done with rats that were genetically susceptible to cancer. When the rats were fed a diet high in omega 3 polyunsaturated fats, plus iron, and without any extra vitamin E, the tumors shrank down to almost nothing. Tumor cells divide rapidly. The cell membranes were very high in omega 3 polyunsaturated fats. The iron acted as a catalyst for oxidation. The cells were disintegrating from rapid oxidation.

The modern American diet is too heavy with omega 6 fats. Good sources of omega 3 include flax seed oil, hemp seed oil, and walnut oil. Fats have many other uses by the body, but this article is about insulin resistance.

Protein is the third major nutrient. The body uses protein in every aspect of its function. Amino acids are used for growth, maintenance, and repair of tissues. It is used to manufacture enzymes, which are involved in every function of the body. Even such structures as bones have a protein matrix to which is added minerals. Water in the blood stream is kept within the blood vessels because of proteins in the blood.

There are eight or ten essential amino acids that the body can’t make; they have to come from the diet. The rest of the proteins can be formed within the body. The body’s need for protein is estimated to be from one to two grams per day per kilogram of lean body mass, depending on the person’s activity. A lumberjack or coal miner needs more than someone who sits all day at a desk. Protein can also be used for energy, but it is not very efficient. Someone on a prolonged fast, perhaps because of famine, first uses up his fat stores, then begins to use muscle for energy. This is why famine victims look like just skin and bones; they have used up most of their muscle.

Someone who wants to decrease insulin resistance needs to increase the ability of the body to burn fat. This can only be done by changing the diet. Whether a person is a vegan or a carnivore, the principle is the same, only the specifics vary.

Dr. Ronald Rosedale, MD, who is an endocrinologist and has much clinical experience with diabetics and insulin resistance syndrome, recommends that 20% of our calories come from carbohydrates, 25-30% from protein, and 50-55% from fat. I would suggest that for someone who is insulin resistant and has some of the symptoms described, this would be a good plan to try, for a few months anyway. After a person has things under control, he can make some changes if he so desires.

Another way to reduce insulin resistance is by exercise. Resistance exercise works better than aerobic exercise. It is thought that the increased circulation to the muscle increases the activity of the receptor sites. Thirty minutes of exercise five days a week, combined with the necessary diet changes, will work faster than one or the other alone.

It has also been discovered that exposure to sunlight lowers blood sugar levels in a diabetic person. This possibly helps to increase insulin sensitivity.

I hope to clear up any confusion that may still exist and make everything more clear next time.