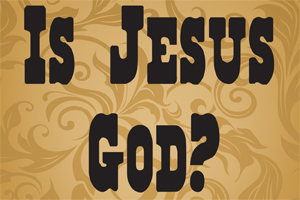 This question requires a definition of the word “God.” If the word “God” is taken to mean, “the supreme ruler of the universe, the Most High God,” then the answer to your question would have to be no, because the Bible recognizes only one person with these titles, and Jesus said Himself that His Father is “the only true [original] God.” (John 17:3)

The word “god” has several different meanings. In a very limited sense, men are called god. Both the Greek word theos and the Hebrew word elohim, which are most often translated “god,” are used in reference to men. (See Exodus 7:1; Psalm 82:6; John 10:34) When the word “god” is used in that sense, then there are hundreds and thousands of gods.

In a less limited sense, angels are called gods. David wrote about man, “For thou hast made him a little lower than the angels.” (Psalms 8:5) The word “angels” in this verse comes from the Hebrew word elohim. The way elohim is used here it denotes a type of being that is higher than man, but it is still used in a limited sense, and with this definition there would still be many gods.

In reference to Christ, elohim and theos are used in a much less limited sense, to denote His nature as being on the same level as His Father—something that cannot be said about any other being in the universe. The Bible says that Christ was “in the form of God.” (Philippians 2:6)

So to clarify, there are many gods when the word “God” is used in a limited sense, to include men and angels. When “God” is used as an adjective to describe the nature of God, then there are only two divine beings, God, the Father and Jesus Christ, His only begotten Son. When the word “God” is used in this sense, then yes, Jesus is God. The Son of God is completely divine by nature because His Father is divine, just as I am completely human because my parents are human.

When the word “God” is used in its absolute sense, to denote “the most High God,” “the Sovereign of the universe,” or “the only true God,” then there is only one God, the Father, beside which there is no God.

Some people think that God is beyond the possibility of having a Son, but Jesus said, “with God all things are possible.” (Mark 10:27) Let’s not limit God. If God would have a thousand begotten Sons it would not detract in the least from the fact that He is “the only true God,” the “one God” of the Bible.