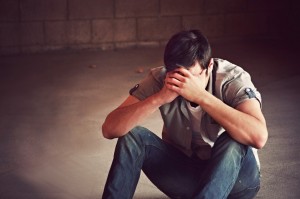 “Please help me. I have a problem about this chapter in Romans 7:1-25. I am confused about this chapter. Was this person convinced or was he in conviction? Was this person converted or not? Do unconverted people delight in the law of God? (Romans 7:22) When we look at verse 18 it looks like this person was convinced. Was he? While in verse 24 he cries for deliverance. This term “wretched” is used twice in the Bible—also in Revelation 3:17. What makes me say that this person was convinced is that you won’t see that you are wretched unless you are convinced. Please help me. I am confused.”

You brought up some excellent questions: ones which have been debated over many times. If Romans chapter seven was all that was written about the gospel we would be left with no hope of victory in this life. This chapter portrays a man who wishes to do good, but finds no power in himself to do good, and continues to do evil instead. This is a very miserable condition, one which I can personally relate to, having been there myself. Fortunately, Paul does not end his letter to the Romans with chapter seven. Chapter eight really gives us the key to victory. Even at the close of chapter seven, after Paul cried out, “O wretched man that I am! who shall deliver me from the body of this death?” we read the following answer: “I thank God through Jesus Christ our Lord…” (Romans 7:24, 25)

Chapter eight begins with these words, “There is therefore now no condemnation to them which are in Christ Jesus, who walk not after the flesh, but after the Spirit. For the law of the Spirit of life in Christ Jesus hath made me free from the law of sin and death. For what the law could not do, in that it was weak through the flesh, God sending his own Son in the likeness of sinful flesh, and for sin, condemned sin in the flesh: That the righteousness of the law might be fulfilled in us, who walk not after the flesh, but after the Spirit.” (Romans 8:1-4) Here Paul contrasts the inability of the law to change a man with the power of Christ, through His Spirit, to transform a man. The difference is as high as heaven is above the earth. In chapter seven Paul described a man who knew what was right, and even wanted to do what was right but had not found the ability to do it. Paul was describing the condition of a man after he has been enlightened by the Spirit of God enough to realize he is a wretched sinner, but before he has fully surrendered to God, and found the power to overcome the sins that beset him.

I know this condition, because I experienced it during my conversion. Several years ago the Spirit of the Lord revealed to me my wicked condition. I had an overwhelming desire to give up my wicked habits, but I found myself lacking the power to overcome. I told all my friends that I had now decided to quit my evil habits, but over and over again I would find myself practicing the very things I  had decided to quit. I was horrified by how little strength I had to overcome my evil habits. At that time I was very ignorant about the Bible. I continued in this condition for about one month, after which my father gave me a little book entitled “Steps to Christ” that shed amazing light upon me, revealing to me how I could give my life to Christ and repent of my sins. From that point until now I have experienced the power of Christ in my life to overcome sin. I have committed sin since that day, for which God has graciously forgiven me, yet my life has been completely changed since I invited Christ into my heart.

After Paul described this intermediate condition between conviction and victory he wrote, “For if ye live after the flesh, ye shall die: but if ye through the Spirit do mortify the deeds of the body, ye shall live.” (Romans 8:13) Paul in no way indicated that a Christian should be satisfied with the experience of Romans chapter seven. He continued his letter by showing the absolute necessity of moving out of Romans chapter seven into the victorious life of Romans chapter eight.