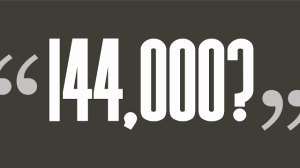 (All questions in this issue from Zimbabwe come from the same letter.     Editor)

I do not seek to get involved in controversy over this issue, since it has no bearing on our salvation. We need to all strive with every part of our being to be part of the 144,000. Only those who keep the commandments of God and have the faith of Jesus will make up that number. They will be alive when the Lord comes, for they will be protected from the seven last plagues. (See Revelation 9:4; 16:2.)

There are very good and logical reasons that support both views. The number 144,000 appears to be a literal number since it is contrasted with “a great multitude, which no man could number.” (Revelation 7:9) However there are reasons that make it appear that this number must be symbolic because they are said to be “of all the tribes of the children of Israel,”and then exactly 12,000 are listed from each tribe. I believe these tribes are symbolic because Paul wrote, “Not as though the word of God hath taken none effect. For they are not all Israel, which are of Israel: Neither, because they are the seed of Abraham, are they all children: but, In Isaac shall thy seed be called. That is, They which are the children of the flesh, these are not the children of God: but the children of the promise are counted for the seed.” (Romans 9:6-8) If the tribes of Israel are symbolic, then it only makes sense that the number would be symbolic as well.

There are two general resurrections, one for the wicked, and one for the righteous. “And have hope toward God, which they themselves also allow, that there shall be a resurrection of the dead, both of the just and unjust.” (Acts 24:15) These resurrections will be separated by 1000 years. (Revelation 20:1-7) The righteous will be raised at the second coming of Christ. (1 Corinthians 15:51-53) The wicked will be raised 1000 years later. (Revelation 20:5)

There was a special resurrection when Christ was raised from the dead. Matthew wrote, “And the graves were opened; and many bodies of the saints which slept arose, And came out of the graves after his resurrection, and went into the holy city, and appeared unto many.” (Matthew 27:52, 53)

The Bible also tells us about another special resurrection where not only saints will come forth, but also some wicked people will arise. This takes place just prior to the second coming of Christ. We read about this in Daniel chapter 12. “And at that time shall Michael stand up, the great prince which standeth for the children of thy people: and there shall be a time of trouble, such as never was since there was a nation even to that same time: and at that time thy people shall be delivered, every one that shall be found written in the book. And many of them that sleep in the dust of the earth shall awake, some to everlasting life, and some to shame and everlasting contempt.” (Daniel 12:1, 2)

Some wicked and some righteous will arise at this time. This helps us understand why the Bible says that when Christ comes in the clouds the soldiers who pierced His side will see Him come. “Behold, he cometh with clouds; and every eye shall see him, and they also which pierced him: and all kindreds of the earth shall wail because of him. Even so, Amen.”(Revelation 1:7) The very same people who drove the nails in His hands and feet, and the one who pierced His side will see Christ come with the clouds of heaven. In order for this to happen they will have to be raised from the dead before Christ’s coming.

John Gill claims that this verse refers to “Christ’s second coming… And they also which pierced him; his hands, feet, and side, when they crucified him; both the Roman soldiers, who actually did it, and the body of the Jewish nation, the rulers and common people, who consented to it, and at whose instigation it was done; these, being raised from the dead, shall see him with their bodily eyes, whom they so used.” (John Gill’s Expositor on Revelation 1:7)

John Gill understood that certain wicked people will be raised from the dead before the second coming of Christ. It is clear that he referred to a special resurrection when we compare this with what he wrote regarding Revelation 20:5;

“But the rest of the dead, &c. Meaning not the dead saints, for they will be all raised together, but the wicked dead; and not them as morally or spiritually, but as corporeally dead: these lived not again until the thousand years were finished; so that there will be such an exact term of years between the resurrection of the saints and the resurrection of the wicked; nor will there be any wicked living upon earth, or in bodies, during that time; for the wicked dead will not be raised with the saints at Christ’s coming, and the wicked living will be destroyed in the conflagration of the world, and neither of them shall live again until the end of these years.” (John Gill’s Expositor on Revelation 20:5)

Let me make something clear here. Just because Gill understands these things this way does not mean they are right. We must only accept what the Bible says. I merely quoted Gill to show that the idea of a future special resurrection before the second coming of Christ is not unique to me.