“The righteousness of God is revealed from faith to faith.” (Romans 1:17) 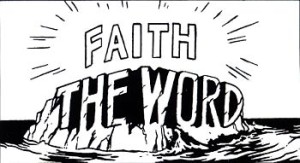 Faith is complete dependence upon the word of God, expecting that word to do what the word itself says.

Is there, then, righteousness spoken by the word of God, so that people can depend completely upon that word, that the word shall accomplish what the word says?

There is. Indeed, that is the very object of the gift of Christ. For him “God hath set forth… to declare his righteousness for the remission of sins that are past, through the forbearance of God.” (Romans 3:25)

Seeing then that God hath set forth Christ expressly to declare, to speak, the righteousness of God, it is certain that the word of God has been spoken, upon which there can be complete dependence, expecting that word to do what that word says. In other words, there is righteousness that can be received by faith.

Wherein is this word spoken?—It is spoken in the word “forgiveness.” “He is faithful and just to forgive us our sins;” “there is forgiveness with thee.” (1 John 1:9; Psalm 130:4)

Now what is the meaning of “forgive”? The word “forgive” is composed of “for” and “give,” which otherwise is give for. To forgive, therefore, is simply to give for. For the Lord to forgive sin, is to give for sin. But what does the Lord give for sin?—He declares “his righteousness for the remission of sins.” (Romans 3:25)

And He does forgive—He does give for—your sins when you ask Him. He says He does, and He does. “He is faithful”—that is, He will never fail—“and just to forgive us our sins.” (1 John 1:9) And the only thing He gives for sins is His righteousness.

Then why not thank Him for the righteousness that He freely gives for your sins, when you ask Him to?

Do you not see that righteousness by faith is just as plain and simple as the asking God for forgiveness of sin? Indeed, it is just that.

Yet how true it is that “we suffer much trouble and grief because of our unbelief, and of our ignorance of how to exercise faith.”

(This is an edited version of an article that was first printed in the March 14, 1899 issue of The Review and Herald. It is also found on pages 39-41 of the book Lessons on Faith by A. T. Jones and E. J. Waggoner.    Editor)