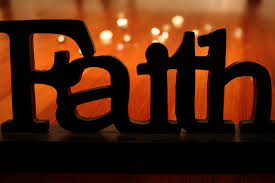 as printed in the September 2002 issue of Present Truth.    Editor)

And such is precisely the truth of the matter: the word of God does teach just this and nothing else, so that it is truly “the faithful word”—the word full of faith.

The greater part of the very first chapter of the Bible is instruction in faith. That chapter has in itself no fewer than six distinct statements that definitely inculcate faith; with the essential connective of the first verse, there are seven.

The inculcation of faith is the teaching that the word of God itself accomplishes the thing which is spoken in that word.

Read, then, the first verse of the Bible. “In the beginning God created the heaven and the earth.” (Genesis 1:1) How did He create them? “By the word of the Lord were the heavens made, and all the host of them by the breath of his mouth… For he spake, and it was.” (Psalm 33:6-9) Before He spoke, it was not; after He spoke, “it was.” Only by speaking, it was. What caused it to be? The word only.

But darkness was upon all the face of the deep. God wished light to be there, but how could there be light when all was darkness? Again He spoke. “And God said, Let there be light; and there was light.” Whence came the light? The word which was spoken, itself produced the light. “The entrance of thy words giveth light.” (Psalm 119:130)

God next desired that there should be dry land. How could this be? Again He spoke. “God said, Let the waters under the heaven be gathered together unto one place and let the dry land appear; and it was so.”

Then there was no vegetation. Whence should this come? Again God spoke. “And God said, let the earth bring forth grass, the herb yielding seed, and the fruit-tree yielding fruit after his kind, whose seed is in itself, upon the earth, and it was so.”

Again He spoke. “And God said, let there be lights in the firmament of heaven… and it was so.”

Again He spoke. “And God said, Let the earth bring forth the living creature… and it was so.”

Thus it was that “by the word of the Lord” all things were created. He spoke the word only, and it was so. The word spoken, itself produced the thing.

Thus it was in creation. And thus it was in redemption. He healed the sick; He cast out devils; He stilled the tempest; He cleansed the lepers; He raised the dead; He forgave sins—all by His word. In all this, also, “He spake and it was.”

And “the knowledge of what the Scripture means when urging upon us the necessity of cultivating faith is more essential than any other knowledge that can be acquired.”

Are you cultivating faith?

(This article was first printed in the December 27, 1898 issue of The Review and Herald. It is also found on pages 16-18 of the book Lessons on Faith by A. T. Jones and E. J. Waggoner. I added some verse references that were left out in the original.    Editor)