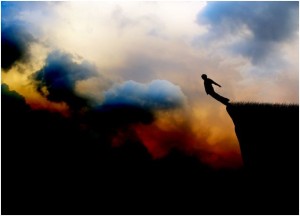 knowledge of what the Scripture means when urging upon us the necessity of cultivating faith is more important than any other knowledge that can be obtained.

Abraham is the father of all them which be of faith. The record of Abraham, then, gives instruction in faith—what it is and what it does for him who has it.

What shall we say, then, that Abraham our father, as pertaining to the faith, has found? What saith the Scripture?

When Abram was more than eighty years old and Sarai his wife was old and he had no child, God “brought him forth abroad and said, Look now toward heaven, and tell the stars, if thou be able to number them: and he said unto him, So shall thy seed be. And [Abram] believed in the Lord; and he counted it to him for righteousness.” (Genesis 15:5, 6) Abram accepted the word of God and expected by the word what the word said. And in that he was right.

Sarai, however, did not put her expectation upon the word of God only. She resorted to a device of her own to bring forth seed. She said to him, “The Lord hath restrained me from bearing: I pray thee, go in unto my maid; it may be that I may obtain children by her.” (Genesis 16:2)

Abram, for the moment, swerved from the perfect integrity of faith. Instead of holding fast his expectation and dependence upon the word of God only, he “hearkened to the voice of Sarai.” (Genesis 16:2)

Accordingly, a child was born, but the whole matter proved to be so unsatisfactory to Sarai that she repudiated her own arrangement. And God showed His repudiation of it by totally ignoring the fact that any child had been born. He changed Abram’s name to Abraham and continued to talk about making him the father of nations through the seed promised and of making his covenant with Abraham and the seed that was promised. He also changed Sarai’s name to Sarah, because she should “be a mother of nations” (Genesis 17:16) through the promised seed.

Abraham noticed this total ignoring of the child that had been born and called the Lord’s attention to it, saying, “O, that Ishmael might live before thee!”

But “God said, Sarah thy wife shall bear thee a son indeed, and thou shalt call his name Isaac, and I will establish my covenant with him for an everlasting covenant and with his seed after him. And as for Ishmael, I have heard thee: behold, I have blessed him, and will make him fruitful and will multiply him exceedingly; twelve princes shall he beget, and I will make him a great nation. But my covenant will I establish with Isaac, which Sarah shall bear unto thee at this set time in the next year.” (Genesis 17:15-21)

But now Abraham was ninety-nine years old and Sarah was eighty-nine. And, if anything, this seemed to put farther off than ever the fulfillment of the word and called for a deeper dependence upon the word of God—a greater faith than before.

It was perfectly plain that now there was no possibility of dependence upon anything whatever, but the naked word only; they were shut up absolutely to this for the accomplishment of what the word said. All works, devices, plans, and efforts of their own were excluded, and they were shut up to faith alone—shut up to the word alone and to absolute dependence upon that word only for the accomplishment of what that word said.

And now that the way was clear for “the word only” to work, that word did work, effectually, and the promised “seed” was born. And so “through faith,” through helpless, total dependence upon the word only—“Sarah herself received strength to conceive seed and was delivered of a child when she was past age, because she judged him faithful who had promised. [And] therefore sprang there even of one, and him as good as dead, so many as the stars of the sky in multitude, and as the sand which is by the seashore innumerable.” (Hebrews 11:11, 12)

And thus was fulfilled the word spoken to Abram, when God “brought him forth abroad, and said, Look now toward heaven, and tell the stars, if thou be able to number them… So shall thy seed be.” (Genesis 15:5)

This is a divine lesson in faith. And this is what the Scripture means when urging upon us the necessity of cultivating faith. For this was imputed to Abraham for righteousness, even the righteousness of God, which is by faith.

Yet “it was not written for his sake alone, that it was imputed to him, but for us also, to whom it shall be imputed, if we believe on him that raised up Jesus our Lord from the dead, who was delivered for our offenses and was raised again for our justification.” (Romans 4:23-25)

And all “they which be of faith are blessed with faithful Abraham.” (Galatians 3:9) All they who, excluding—yea, repudiating—all works, plans, devices, and efforts, of their own, depend in utter helplessness upon the word of God only to accomplish what that word says—these are they which be of faith and are blessed with faithful Abraham with the righteousness of God.

(This article was first printed in the January 24, 1899 issue of The Review and Herald. It is also found on pages 25-28 of the book Lessons on Faith by A. T. Jones and E. J. Waggoner. I did some minor editing and added some verse references that were left out in the original.    Editor)