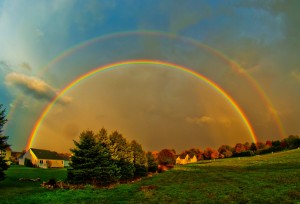 “To HIM that worketh not, but believeth on him that justifieth the ungodly, his faith is counted for righteousness.” (Romans 4:5)

This is the only way that anybody in this world can ever become righteous. First admit that he is ungodly, then believe that God justifies, counts righteous, the ungodly, and he is righteous with the very righteousness of God.

Everybody in the world is ungodly. “Ungodly” means “unlike God.” And it is written, “All have sinned and come short of the glory [the goodness, the character] of God.” (Romans 3:23)

Anybody, therefore, who will admit that he ever came short of being like God in anything, in that confesses that he is ungodly.

But the truth is that everybody, in everything, has come short of being like God. For “they are all gone out of the way, they are together become unprofitable; there is none that doeth good, no, not one.” (Romans 3:9-18)

Then, as there is not one on earth who is not ungodly, and as God justifies the ungodly, this on God’s part makes justification—righteousness, salvation—full, free, and sure to every soul on earth.

And all that anybody needs to do to make it all sure to himself on his own part, is to accept it—to believe that God does justify, personally and individually, him who is ungodly.

Thus, strange as it may sound to many, the only qualification, and the only preparation, for justification is for a person to acknowledge that he is ungodly.

Then, having such qualification, having made such preparation, all that is required of him to obtain justification, full, free, and sure, is to believe that God justifies him, the ungodly one.

And the sole reason why they cannot believe that God justifies them, is that they are ungodly, so ungodly.

But that would be only to take away all ground for justification, for if a man can find good in himself, he has it already, and does not need it from anywhere else. If he can straighten up and do better of himself, he does not need any justification from anywhere else. It is, therefore, a contradication in terms to say that I am so ungodly that I do not see how the Lord can justify me. For if I am not ungodly, I do not need to be made righteous; I am righteous. There is no half-way ground between godliness and ungodliness.

But when every conceivable ground of hope of any dependence on anything in or about himself is gone and is acknowledged to be gone; when everything that can be seen is against any hope of justification, then it is that, throwing himself on the promise of God, upon the word only, hoping against hope, faith enters and by faith he finds justification full and free, all ungodly though he be.

(This article was first printed in the February 7, 1899 issue of The Review and Herald. It is also found on pages 31-33 of the book Lessons on Faith by A. T. Jones and E. J. Waggoner. I added some verse references that were left out in the original.    Editor)