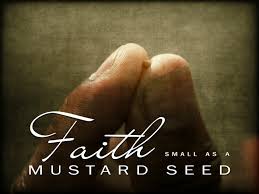 ss of God without the law is manifested, being witnessed by the law and the prophets; even the righteousness of God which is by faith of Jesus Christ unto all and upon all them that believe; for there is no difference: for all have sinned, and come short of the glory of God.” (Romans 3:21-23)

The Lord wants you to say that what He says is so; that it is so “now,” at this moment, and that it is so to you and in you. “A new commandment I write unto you, which thing is true in him and in you.” (1 John 2:8) When the Lord says a thing, it is true, even though nobody in the world ever believes it. It would be true in Him, but not in them. But He wants it to be true in you as well as in Himself. And when you acknowledge that what He says is true to you “now,” at this moment, then that thing is true in Him and in you. This is believing God. It is believing His word. This is having His word abiding in you. And, “If ye abide in me and my words abide in you, ye shall ask what ye will, and it shall be done unto you.” (John 15:7)

Many people are ready to admit, in a general way, that what the Lord says is so; they will admit that it may be so to other people, but that it is so to themselves, just now, they will not say. Such people do not really know that the word of God is true. “Hast thou faith? Have it to thyself before God.” (Romans 14:22) If you do not have faith for yourself, faith of your own, you do not have faith at all. If you do not believe the word of the Lord as being true to you personally and now, you do not believe it at all; for as you are not living yesterday nor tomorrow but just now, while it is now, so if you do not believe now, you do not believe at all. Therefore the word of God is that now is the accepted time; now is the day of salvation; and, “Now the righteousness of God… is manifested, being witnessed by the law and the prophets; even the righteousness of God which is by faith of Jesus Christ unto all and upon all them that believe.”

Do you believe in Jesus Christ as your personal Saviour now? You can answer that in one moment; you know that you do. Then this moment thank the Lord that His righteousness is manifested unto you and upon you. He not only says it but He gives you witnesses to the fact—it is witnessed by the law and the prophets. That law which you have transgressed, that law that has shown you guilty before God, that very law “now,” in view of the manifestation of the righteousness of God, witnesses that you have a just claim to this righteousness and that you are thereby justified through the faith of Jesus Christ. The prophets likewise witness to this blessed fact. “The moment the sinner believes in Christ, he stands in the sight of God uncondemned; for the righteousness of Christ is his; Christ’s perfect obedience is imputed to him.” Is not this, then, sufficient to cause you to say now, at this moment if never before, that “now the righteousness of God is manifested” unto you and upon you who now do believe in Jesus?

But the Lord does not drop the subject yet. He emphasizes the present power and blessing of this infinite fact. “To declare, I say, at this time his righteousness.” First He says that it is “now” that the righteousness of God is manifested unto all and upon all them that believe; then He speaks of all such as “being justified freely”, and next He emphasizes it all thus: “To declare, I say at this time his righteousness.” O poor, trembling, doubting soul, is not this assurance enough that now, at this moment, the righteousness of God is yours? That now you are being justified freely by His grace? that now, “at this time,” righteousness is declared to you for the remission of all your sins that are past?

Is not this enough? It is enough to satisfy the Lord, for He says, “To declare, I say, at this time, his righteousness; that he might be just and the justifier of him that believeth in Jesus.” Then as it is all-sufficient to satisfy the Lord, is it not enough to satisfy you? Will you now take the fullness of this blessed “gift of righteousness,” which is life, so that the Lord, by seeing the fruit of the travail of His soul, shall be satisfied again, and so, by your rejoicing, be doubly satisfied? This is all He asks of you. For “to him that worketh not, but believeth on him that justifieth the ungodly, his faith is counted for righteousness.” (Romans 4:5)

Here is the word of God, the word of righteousness, the word of life, to you “now,” “at this time.” Will you be made righteous by it now? Will you live by it now? This is justification by faith. This is righteousness by faith. It is the simplest thing in the world. It is simply whether the word of God shall be true in you “now” or not. God spoke to Abraham, “Tell the stars, if thou be able to number them… So shall thy seed be.” (Genesis 15:5) And “Abraham believed God, and it was accounted to him for righteousness.” (Galatians 3:6) “Now it was not written for his sake alone that it was imputed to him; but for us also, to whom it shall be imputed, if we believe on him that raised up our Lord Jesus from the dead; who was delivered for our offenses and was raised again for our justification. Therefore being justified by faith, we have peace with God through our Lord Jesus Christ.” (Romans 4:23-5:1)