Hello friend. It will not take long to read this article, and I hope you will read right through to the end. If you do, then your eyes will be opened to the startling 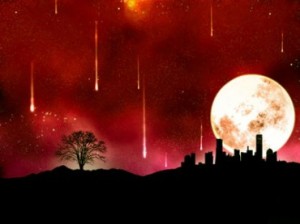 delusion which is rapidly sweeping over the whole world and gathering the people of planet earth into the camp of Satan.

The Bible speaks in many places of a terrible persecution which will arise against the people of God in the last days, just before Jesus returns. (Matthew 10:22, 23; Revelation 13:15-17) Although most of us are aware of this coming crisis, yet, there is one aspect of it which is so unexpected and for which we are so unprepared, that there is great danger that even some who mean to do well, will be swept away in the confusion which accompanies this final crisis.

Whenever the Bible speaks of the last days, there is one word which comes up again and again. This is the word, “deceive!” Jesus said, “Many false prophets shall rise, and shall deceive many.” (Matthew 24:11)

God shows us in several passages that the people on this earth will be deceived by the devil and his agents, and that most people will be lost because of believing these deceptions. Now please consider the following question very carefully: What is the most effective way of deceiving a person?

Well, if I wanted to deceive you, first of all I would need to gain your trust and confidence. I would need to behave in such a manner as to convince you that I am a sincere, trustworthy person. The more completely that I can get you to believe in me, then the easier it will be for me to deceive you. Please consider that point very carefully. The deceivers of the last days will be people that the whole world will be inclined to trust. In fact, they will call upon the name of Christ; they will preach and do miracles in His name, and they will be popular and well-respected. (Matthew 7:22, 23; Luke 6:26) These are the people whom Jesus was warning against when He said, “Beware of false prophets, which come to you in sheep’s clothing, but inwardly they are ravening wolves.” (Matthew 7:15)

Notice, they come to you in “sheep’s clothing.” What does this indicate? It shows that outwardly they appear to be followers of Christ. The world accepts them as followers of Christ. All men believe that these are good people. It is only the elect of God—those who are taught and led by His Holy Spirit—who are able to know the true nature of these false prophets. This, again, is another vital point to remember. In general, when people think of false prophets, they think of men such as David Koresh, the leader of the Davidian cult, who was killed at Waco, or Jim Jones, the head of the Jonestown cult that committed mass suicide in Guyana several years ago. They look at these men and say, “these are the false prophets and the deceivers that the Bible is talking about.” But hold on a minute. How many persons did these men deceive? Not very many at all. In fact, the majority of people on the earth were suspicious of them and regarded them as dangerous men. The Bible tells us that the real deceivers of these last days will “deceive many” (Matthew 24:11); “them that dwell on the earth” (Revelation 13:14); and “the kings of the earth.” (Revelation 16:14)

It is clear then, that these deceivers will be popular people. Accepted and admired by the people of the whole world, recognized and highly regarded by the political leaders, and will be people who call themselves Christians! Let us list these marks which identify these deceivers:

In other words, my friend, do not look for these dangerous deceivers among the various little cults and fanatical groups around the world. These do not have the influence or the power to deceive very many people. We must look for these wolves in sheep’s clothing among the popular churches and denominations of today! What a shocking idea! To look for these deceivers in my own church? Yes! This is exactly what the Bible is trying to tell us. The only people who can truly deceive us are those in whom we put our confidence, and in whom do we put greater confidence than the leaders of our own church? This is the shocking truth. Think about it for a moment and you will realize that I am telling the truth.

Please do not dismiss the thoughts which are presented here. Let me ask you, do you place such little value on your soul? Are you so loyal to men, to human leaders that you will entrust your soul to them in the hope that they know what they are doing? Surely, my friend, you will have the good sense to take note of the warnings of Jesus and learn to put no confidence in men. “Put ye not confidence in a guide.” (Micah 7:5)

When the world praises Christian leaders, then you may have a good idea that these leaders are false prophets. “Woe unto you, when all men shall speak well of you! for so did their fathers to the false prophets.” (Luke 6:26) When your church has close ties with political leaders, and is accepted and highly regarded by the people of earth, then you may know that you belong to a false church and not the true church of God. Upon the authority of God’s word I tell you this: Get out of that church, reject those leaders, or you will lose your soul! The spirit of true Christianity is always in conflict with the spirit of the world; therefore, true Christianity will always be hated and disliked by sinners. How then can God’s people be popular with the world? Please consider these plain statements:

“Ye adulterers and adulteresses, know ye not that the friendship of the world is enmity with God? Whosoever therefore will be a friend of the world is the enemy of God.” (James 4:4)

Yet, my friend, the world loves and appreciates the popular Christianity of today! Doesn’t this tell you something? How can those who serve Satan find harmony with those who love God? Impossible! The striking truth is this: Popular Christianity, which makes up the majority of churches today, have so turned from the true way of Christ that they no longer have any idea of what is true righteousness. The world has no problem with them. They can fellowship together at ecumenical gatherings, “national days of fasting,” “prayer breakfasts,” etc. At all these gatherings we find secular, political leaders fellowshiping in harmony with church leaders and speaking from the pulpits of churches. Something is wrong! With the voice of a trumpet the facts shout at you: Something is wrong!

The stage is set, the actors are in place. Now you can see them. They have the appearance of sheep, but if you look carefully through the eyes of the Word of God, you can see that they have the teeth, and the voices, and the hearts of ravening wolves. (Matthew 7:15) Now that you can see them for what they are, the fascinating question is this: What are the deceptions with which they have confused and intoxicated the people of the world? (Revelation 17:2)

It is impossible for us to answer this question in this article, but if you would like to understand more on this matter, then please write to us for the booklet entitled, A Time to Choose, which deals with the mark of the beast crisis. However, I would like to give you a hint. Jesus said, in Matthew 7:21-27, that claiming to be a Christian is not enough. He made it plain that the important thing is that you should be obedient to His commandments.

Friends, I am talking about your minister, your church leader; the principal religious men of your denomination. I beg of you, in God’s name, do not put your trust in these men. “Cursed be the man that trusteth in man.” (Jeremiah 17:5) Take heed to the warnings of God’s Word. These men, who have been trained in the schools and the ways of the world, can never, while seeking popularity and power, think in the ways of Christ.

I pray that you are one of the elect who will be saved from the greatest deception of these last days.

(This article was taken from a tract, written by David Clayton, entitled, “Religious Deception.” This tract is available online at www.presenttruth.info. You may request printed copies by contacting David Clayton at PO Box 23, Knockpatrick, Manchester, Jamaica, West Indies. You may e-mail him at: david@restorationministry.com. You may call him at (876) 904-7392.     Editor)