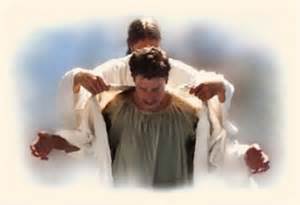 “Not by works of righteousness which we have done, but according to His mercy He saved us, by the washing of regeneration, and renewing of the Holy Ghost.” (Titus 3:5) God does not save us because we have done a certain amount of righteousness, but because He is merciful. Righteousness is a free gift and not something that we must earn. “For if by one man’s offence death reigned by one; much more they which receive abundance of grace and of the gift of righteousness shall reign in life by one, Jesus Christ.)” (Romans 5:17) Jesus told us to “ask and ye shall receive.” Since righteousness is a free gift, we should ask God for that gift, and He has promised that we will receive it if we believe.

God tells us that “there is none righteous, no not one.” (Romans 3:10) We are not to think of ourselves as though we are righteous because of something we have done. “For I know that in me (that is, in my flesh,) dwelleth no good thing. …” (Romans 7:18) Nothing that comes from ourselves is good. This idea was understood by Job: “If I justify myself, mine own mouth shall condemn me: if I say, I am perfect, it shall also prove me perverse. Though I were perfect, yet would I not know my soul: I would despise my life.” (Job 9:20, 21)

Job says that even if he were perfect, he would despise his life. He would understand that no good thing came from himself. In the beginning of the book of Job God says that Job is perfect: “And the Lord said unto Satan, Hast thou considered my servant Job, that there is none like him in the earth, a perfect and an upright man, one that feareth God, and escheweth evil?” (Job 1:8) God considered Job perfect, yet Job says that if he were perfect he would still despise his life and not lift up his head with pride. “If I be wicked, woe unto me; and if I be righteous, yet will I not lift up my head. …” (Job 10:15)

“I can of mine own self do nothing”

Even Jesus, when He was on this earth, said, “there is none good but one, that is, God.” “And, behold, one came and said unto Him, Good Master, what good thing shall I do, that I may have eternal life? And He said unto Him, Why callest thou me good? there is none good but one, that is, God: but if thou wilt enter into life, keep the commandments.” (Matthew 19:16, 17) Jesus understood that if He did not have help from God, His Father, then He would have been as bad as any other man. Some say that Christ was referring to Himself as good along with His Father. If this were the case, He would have said, “There is none good but two, that is God and myself.” Obviously He did not say this, and was referring to His Father only.

“Believest thou not that I am in the Father, and the Father in me? the words that I speak unto you I speak not of myself: but the Father that dwelleth in me, He doeth the works.” (John 14:10) Jesus also tells us in John 5:30: “I can of mine own self do nothing: as I hear, I judge: and my judgment is just; because I seek not mine own will, but the will of the Father which hath sent me.” As it is with Christ, so it is with us. “I am the vine, ye are the branches: He that abideth in me, and I in him, the same bringeth forth much fruit: for without me ye can do nothing.” (John 15:5)

The rest for the people of God 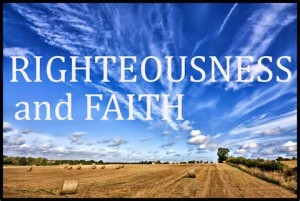 In the fourth chapter of Hebrews God shows us a rest that symbolizes righteousness by faith. “Seeing therefore it remaineth that some must enter therein, and they to whom it was first preached entered not in because of unbelief.” (Hebrews 4:6) The Israelites did not enter into God’s rest because they were trying to establish their own righteousness, and did not have faith in God. We must take heed lest we follow their example. “Let us labour therefore to enter into that rest, lest any man fall after the same example of unbelief.” (Hebrews 4:11)

“There remaineth therefore a rest to the people of God. For he that is entered into His rest, he also hath ceased from his own works, as God did from His.” (Hebrews 4:9, 10) If we truly have righteousness by faith, we will cease from our own works. We will not seek our own pleasure, but will know that whatever God wants us to do, that is the best thing we could possibly do.

We already read that Christ never did his own works, but the Father did all the works in Him. He also did not speak His own words, but His Father told Him what to say. “For I have not spoken of myself; but the Father which sent me, He gave me a commandment, what I should say, and what I should speak.” (John 12:49) Neither did He find His own pleasure, but always did those things that pleased His Father. “And He that sent me is with me: the Father hath not left me alone; for I do always those things that please Him.”(John 8:29) This, of course, was His delight. “I delight to do thy will, O my God: yea, thy law is within my heart.” (Psalm 40:8)

We are not to do our own ways, but rather to allow God to do His work in us. “For it is God which worketh in you both to will and to do of His good pleasure.” (Philippians 2:13) Every good thing that we think we have done, or that we see in ourselves, we must acknowledge that it is God who is doing those things and not ourselves. “That the communication of thy faith may become effectual by the acknowledging of every good thing which is in you in 1519 [or “to”] Christ Jesus.” (Philemon 6) “Lord, thou wilt ordain peace for us: for thou also hast wrought all our works in us.” (Isaiah 26:12) It is the Lord who is doing all the good works in us, and not us.

We are not to trust in our own righteousness, or it will prove our ruin. “When I shall say to the righteous, that he shall surely live; if he trust to his own righteousness, and commit iniquity, all his righteousnesses shall not be remembered; but for his iniquity that he hath committed, he shall die for it.” (Ezekiel 33:13)

We must understand that God’s righteousness does not come to us by the law. “Is the law then against the promises of God? God forbid: for if there had been a law given which could have given life, verily righteousness should have been by the law.” (Galatians 3:21) Paul makes a very good point in Galatians 2:21. “I do not frustrate the grace of God: for if righteousness come by the law, then Christ is dead in vain.” If we could have become righteous by doing the deeds of the law, there would have been no need for Christ to humble Himself and die for us. Surely Christ would not have died for nothing.

I pray that we would all “be found in Him, not having mine [our] own righteousness, which is of the law, but that which is through the faith of Christ, the righteousness which is of God by faith.” (Philippians 3:9)

Faith without works is dead

In the book of James we find these interesting words: “Yea, a man may say, Thou hast faith, and I have works: shew me thy faith without thy works, and I will shew thee my faith by my works. Thou believest that there is one God; thou doest well: the devils also believe, and tremble. But wilt thou know, O vain man, that faith without works is dead?”(James 2:18-20) The works that a man has are simply a result of the righteousness that he has by faith. Faith without works is dead because if a man has faith, then works will be a natural result, and a sign that he has faith. If there are no works, it is evident that there is no faith, because faith works. “For in Jesus Christ neither circumcision availeth any thing, nor uncircumcision; but faith which worketh by love.” (Galatians 5:6)

It is not the works (a result of faith) that save a man, but faith is what is counted for righteousness. Look at what Paul tells a man that was in need of the way of salvation. A jailer was just about to kill himself for fear of what would become of him, when Paul yelled out to him. The jailer ran in “And brought them out, and said, Sirs, what must I do to be saved? And they said, Believe on the Lord Jesus Christ, and thou shalt be saved, and thy house.” (Acts 16:30, 31) Paul didn’t give him a long list of what to do and what not to do, but he merely said, “Believe on the Lord Jesus and thou shalt be saved.” Paul understood that believing on the Lord Jesus is what

saves a poor sinner like you and me. The works will naturally come as a result of that belief, but those works cannot and will not save anyone.

The thief on the cross was not saved by any works that he had done, but by believing on the Lord Jesus. May the Lord help us all to better understand this vital issue, because if we are found in our own garments (our own righteousness), we will be cast out as was the man at the wedding feast. “And when the king came in to see the guests, he saw there a man which had not on a wedding garment: And he saith unto him, Friend, how camest thou in hither not having a wedding garment? And he was speechless. Then said the king to the ser-

vants, Bind him hand and foot, and take him away, and cast him into outer darkness; there shall be weeping and gnashing of teeth.” (Matthew 22:11-13)