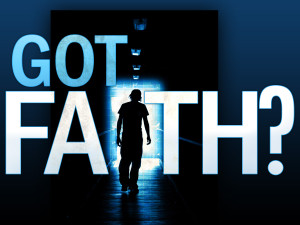 “But the righteousness which is of faith speaketh on this wise, Say not in thine heart, Who shall ascend into heaven? (that is, to bring Christ down from above); or, Who shall descend into the deep? (that is, to bring up Christ again from the dead). But what saith it? The word is nigh thee, even in thy mouth, and in thy heart; that is, the word of faith, which we preach: that if thou shalt confess with thy mouth the Lord Jesus and shalt believe in thine heart that God hath raised him from the dead, thou shalt be saved.” (Romans 10:6-9)

May we accept these words, especially the statement in the last verse, as literally true? Shall we not be in danger if we do? Is not something more than faith in Christ necessary to salvation? To the first of these questions we say, Yes, and to the last two we say, No, and refer to the Scriptures for corroboration. So plain a statement cannot be other than literally true and one that can be depended on by the trembling sinner.

As an instance in proof, take the case of the jailer at Philippi. Paul and Silas, after having been inhumanly beaten, were placed in his care. Notwithstanding their lacerated backs and their manacled feet, they prayed and sang praises to God at midnight and suddenly an earthquake shook the prison, and all the doors were opened. It was not alone the natural fear produced by feeling the earth rock beneath him nor yet the dread of Roman justice if the prisoners in his charge should escape, that caused the jailer to tremble. But he felt in that earthquake shock a premonition of the great judgment, concerning which the apostles had preached; and, trembling under his load of guilt, he fell down before Paul and Silas, saying, “Sirs, what must I do to be saved?” Mark well the answer; for here was a soul in sorest extremity and what was sufficient for him must be the message to all lost ones. To the jailer’s anguished appeal, Paul replied, “Believe on the Lord Jesus Christ, and thou shalt be saved.” (Acts 16:30, 31) This agrees exactly with the words which we quoted from Paul to the Romans.

On one occasion the Jews said unto Jesus, “What shall we do that we might work the works of God?” Just the thing that we want to know. Mark the reply: “This is the work of God, that ye believe on him whom he hath sent.” (John 6:28, 29) Would that these words might be written in letters of gold and kept continually before the eyes of every struggling Christian. The seeming paradox is cleared up. Works are necessary, yet faith is all-sufficient, because faith does the work. Faith comprehends everything and without faith there is nothing.

The trouble is that people in general have a faulty conception of faith. They imagine that it is mere assent and that it is only a passive thing to which active works must be added. But faith is active and it is not only the most substantial thing but the only real foundation. The law is the righteousness of God (Isaiah 51:6, 7), for which we are commanded to seek (Matthew 6:33), but it cannot be kept except by faith, for the only righteousness which will stand in the Judgment is “that which is through the faith of Christ, the righteousness which is of God by faith.” (Philippians 3:9)

Read the words of Paul in Romans 3:31. “Do we then make void the law through faith? God forbid; yea, we establish the law.” Making void the law of God by man is not abolishing it; for that is an impossibility. It is as fixed as the throne of God. No matter what men say of the law, nor how much they trample upon it and despise it, it remains the same. The only way that men can make void the law of God is to make it of none effect in their hearts by their disobedience. Thus in Numbers 30:15, a vow that has been broken is said to have been made void. So when the apostle says that we do not make void the law through faith, he means that faith and disobedience are incompatible. No matter how much the law- breaker professes faith, the fact that he is a law-breaker shows that he has no faith. But the possession of faith is shown by the establishment of the law in the heart, so that the man does not sin against God. Let no one decry faith as of little moment.

Then how about James 2:14, which says: “What doth it profit, my brethren, though a man say he hath faith and have not works? Can faith save him?” The answer necessarily implied is, of course, that it cannot. Why not? Because he hasn’t it. What doth it profit if a man say he has faith, if by his wicked course he shows that he has none? Must we decry the power of faith simply because it does nothing for the man who makes a false profession of it? Paul speaks of some who profess that they know God but who deny Him by their works. Titus 1:16. The man to whom James refers is one of this class. The fact that he has no good works—no fruit of the Spirit—shows that he has no faith, despite his loud profession, and so of course faith cannot save him; for faith has no power to save a man who does not possess it.