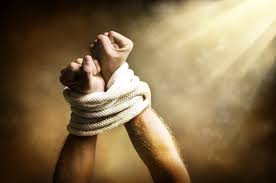 There is a serious and very bothersome mistake which is made by many persons. That mistake is made in thinking that when they are converted their old sinful flesh is blotted out. In other words, they make the mistake of thinking that they are to be delivered from the flesh by having it taken away from them altogether.

And yet, if they would think a little, they ought to be able to see that that is all a mistake. Did you not have exactly the same body after you were converted that you had before? Was not that body composed of exactly the same material—the same flesh and bones and blood—after you were converted as that of which it was composed before? To these questions everybody will promptly say Yes. And plainly that is the truth.

And now there are further questions: Was not that flesh also of exactly the same quality as before? Was it not still human flesh, natural flesh, as certainly as it was before? To this also everybody will say Yes.

Then also a still further question: It being the same flesh and of the same quality—it still being human flesh, natural flesh—is it not also still just as certainly sinful flesh as it was before?

Just here is where creeps in the mistake of these many persons. To this last question they are inclined to think that the answer should be “No,” when it must be only a decided “Yes.” And this decided “Yes” must be maintained so long as we continue in this natural body.

And when it is decided and constantly maintained that the flesh of the converted person is still sinful flesh and only sinful flesh, he is so thoroughly convinced that in his flesh dwells no good thing that he will never allow a shadow of confidence in the flesh. And this being so, his sole dependence is upon something other than the flesh, even upon the Holy Spirit of God. His source of strength and hope is altogether exclusive of the flesh, even in Jesus Christ only. And being everlastingly watchful, suspicious, and thoroughly distrustful of the flesh, he never can expect any good thing from that source, and so is prepared by the power of God to beat back and crush down without mercy every impulse or suggestion that may arise from it, and so does not fail, does not become discouraged, but goes on from victory to victory and from strength to strength.

Conversion, then, you see, does not put new flesh upon the old spirit but a new Spirit within the old flesh. It does not propose to bring new flesh to the old mind, but a new mind to the old flesh. Deliverance and victory are not gained by having the human nature taken away, but by receiving the divine nature to subdue and have dominion over the human—not by the taking away of the sinful flesh, but by the sending in of the sinless Spirit to conquer and condemn sin in the flesh.

The Scripture does not say, Let this flesh be upon you which was also upon Christ, but it does say, “Let this mind be in you, which was also in Christ Jesus.” (Philippians 2:5)

The Lord Jesus took the same flesh and blood, the same human nature, that we have, flesh just like our sinful flesh, and because of sin, and by the power of the Spirit of God through the divine mind that was in Him, “condemned sin in the flesh.” (Romans 8:3) And therein is our deliverance (Romans 7:25); therein is our victory. “Let this mind be in you, which was also in Christ Jesus.” (Philippians 2:5) “A new heart also will I give you, and a new Spirit will I put within you.” (Ezekiel 36:26)