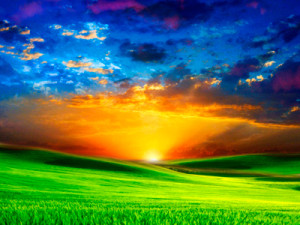 It should be particularly noted that in the first and second chapters of Hebrews the thought and discussion concerning the person of Christ is especially as to nature and substance. In Philippians 2:5-8 there is presented the thought of Christ’s relationship to God and to man, especially as to nature and form. Thus: “Let this mind be in you, which was also in Christ Jesus; who, being in the form of God thought it not robbery to be equal with God; but emptied Himself [Revised Version], and took upon Him the form of a servant, and was made in the likeness of men: and being found in fashion as a man, He humbled Himself, and became obedient unto death, even the death of the cross.” (Philippians 2:5-8)

When Jesus emptied Himself He became man, and God was revealed in the Man. When Jesus emptied Himself, on the one side man appeared, and on the other side God appeared. Thus in Him God and man meet in peace and become one: “for He is our peace, who hath made both [God and man] one,… having abolished in His flesh the enmity,… to make in Himself of twain [God and man] one new man, so making peace.” (Ephesians 2:14, 15)

He who was Creator and Lord became creature and servant.

He came to man where man is to bring man to Him where He was and is.

And in order to redeem man from what man is, He was made what man is:

Thus, literally, “in all things it behooved Him to be made like unto His brethren.” (Hebrews 2:17)

Yet it must never be forgotten, it must be borne in mind and heart constantly and forever, that in none of this as to man, the flesh, sin, and the curse was Christ ever of Himself or of His own original nature or fault. All this He “was made.” “He took upon Him the form of a servant, and was made in the likeness of men.”

And in all this Christ was “made” what, before, He was not in order that the man might be made now and forever what he is not.

And as the righteousness of God, which, in Christ, the man is made, is real righteousness, so the sin of men, which Christ was made in the flesh, was real sin.

Thus the guilt, the condemnation, the discouragement of the knowledge of sin were His—were a fact in His conscious experience—as really as they were ever such in the life of any sinner that was ever on earth. And this awful truth brings to every sinful soul in the world the glorious truth that “the righteousness of God,” and the rest, the peace, and the joy, of that righteousness, are a fact in the conscious experience of the believer in Jesus in this world, as really as they are in the life of any saint who was ever in heaven.

He was made “in all things” like unto us. He was in all points like as we are. So fully was this so that He could say, even as we must say the same truth, “I can of mine own self do nothing.” (John 5:30)

Of Him this was so entirely true that, in the weakness and infirmity of the flesh,—ours which He took—He was as is the man who is without God and without Christ. For it is only without Him that men can do nothing. With Him and through Him, it is written: “I can do all things.” But of those who are without Him it is written: “Without Me ye can do nothing.” (John 15:5)

Therefore, when of Himself He said, “I can of Mine own self do nothing,” this makes it certain forever that in the flesh,—because of our infirmities which He took; because of our sinfulness, hereditary and actual, which was laid upon Him and imparted to Him—He was of Himself in that flesh exactly as is the man who, in the infirmity of the flesh, is laden with sins, actual and hereditary, and who is without God. And standing thus weak, laden with sins and helpless as we are, in divine faith He exclaimed, “I will put My trust in Him.” (Hebrews 2:13)

He came to “seek and to save that which was lost.” And in saving the lost, He came to the lost where we are. He put Himself among the lost. “He was numbered with the transgressors.” (Isaiah 53:12) He was made to be sin. And from the standpoint of the weakness and infirmity of the lost, He trusted in God, that He would deliver Him and save Him. Laden with the sins of the world; and tempted in all points like as we are, He hoped in God and trusted in God to save Him from all those sins and to keep Him from sinning. (Psalm 69:1-21; 71:1-20; 22:1-22; 31:1-5)

And this is the faith of Jesus: this is the point where the faith of Jesus reaches lost, sinful man to help him. For thus it has been demonstrated to the very fulness of perfection, that there is no man in the wide world for whom there is not hope in God, no one so lost that he can not be saved by trusting God in this faith of Jesus. And this faith of Jesus, by which in the place of the lost, He hoped in God and trusted God for salvation from sin and power to keep from sinning—this victory of His it is that has brought to every man in the world divine faith by which every man can hope in God and trust in God and can find the power of God to deliver him from sin and to keep him from sinning. That faith which He exercised and by which He obtained the victory over the world, the flesh, and the devil—that faith is His free gift to every lost man in the world. And thus “this is the victory that overcometh the world, even our faith;” (1 John 5:4) and this is the faith of which He is the Author and Finisher.

And now of the things which we have spoken this is the sum: “We have SUCH an High Priest.” All that we have thus found in the first and second chapters of Hebrews is the essential foundation and preliminary of His high priesthood. For “in all things it behooved Him to be made like unto His brethren, that [so that, in order that] He might be a merciful and faithful High Priest in things pertaining to God, to make reconciliation for the sins of the people. For in that He Himself hath suffered being tempted, He is able to succor them that are tempted.” (Hebrews 2:17, 18)

(This article was taken from pages 45-51 of the book, The Consecrated Way to Christian Perfection, by Alonzo T. Jones. Some editing has been done for this publication.    Editor)