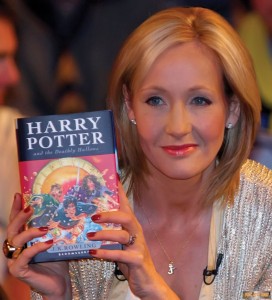 Almost overnight Joanne K. Rowling’s books about a student wizard named Harry Potter have become number one sellers. These books are designed for young children and introduce them to the world of witchcraft and magic.

A USA Today report says, “Those needing a hit of magic, morality and mystical worlds can do no better than opening Harry Potter and the Chamber of Secrets, the second installment from J.K. Rowling about the young wizard-in-training at Hogwarts School of Witchcraft and Wizardry. Chamber offers young readers an equal measure of dark wizards, noble mentors, hideous beasts and epic battles of good vs. evil.”
http://www.usatoday.com/life/enter/books/book112.htm

There are some who are concerned about this new series of children’s books. A Time Magazine report says, “Reading about wizards and spells and great feats of the imagination has the potential to drive children straight into the waiting arms of the occult. That appears to be the thinking out of Columbia, S.C., where a group of parents and school board administrators are arguing the dangers of the stunningly popular Harry Potter book series. They want the tales of a boy’s magical adventures, beloved by hordes of children and parents alike, taken out of their schools. And it’s not just South Carolinians who aren’t so wild about Harry; parents and school administrators in Georgia and Minnesota have also raised objections to the stories, using words like ‘death, hate and evil’ to describe their tone.”
http://www.time.com/time/nation/article/0,8599,32697,00.html

Is there legitimate reason for concern about these books? Are the books actually causing young children to enter into the world of witchcraft and wizardry?

In an article entitled, “Potter Fans Turning to Witchcraft” we read, “The Pagan Federation has appointed a youth officer to deal with a flood of inquiries following the success of the Harry Potter books which describe magic and wizardry.

“The federation says the Potter books, by JK Rowling, and TV shows such as Sabrina The Teenage Witch and Buffy The Vampire Slayer, had probably sparked the new flood of interest.

“Media officer Andy Norfolk said: ‘In response to the increased queries coming from youngsters we established a youth officer, not to promote paganism, because that would be against pagan ethics, but merely to answer these queries and allow someone to offer advice and information.

“‘It is quite probably linked to things like Harry Potter, Sabrina The Teenage Witch and Buffy The Vampire Slayer. Every time an article on witchcraft or paganism appears, we had a huge surge in calls, mostly from young girls.’

“Mr. Norfolk said that parents should not be alarmed by their children’s sudden interest in magic. ‘Paganism is recognised as a valid religion,’ he said. ‘In no way is it a cult and certainly it offers nothing untoward.’”
http://www.thisislondon.co.uk/dynamic/news/story.html?in_review_id=306029&in_review_text_id=250010

It is very clear that Harry Potter books are leading young children into paganism and witchcraft. The world may recognize paganism as a valid religion, but according to the Bible it is Satan worship. (See 1 Corinthians 1:20 and Deuteronomy 32:16, 17) As Christians, do we want our children practicing paganism and witchcraft? Certainly not! God has expressly forbidden us to have any dealings with witches or wizards.

“There shall not be found among you any one that maketh his son or his daughter to pass through the fire, or that useth divination, or an observer of times, or an enchanter, or a (Deuteronomy 18:10, 11) In the Old Testament, if a person became involved in witchcraft they would be put to death. “Thou shalt not suffer a witch to live.” (Exodus 22:18)

God has warned us that in the last days these things will increase. “Now the Spirit speaketh expressly, that in the latter times some shall depart from the faith, giving heed to seducing spirits, and doctrines of devils.” (1 Timothy 4:1)

God has given a multitude of warnings against wizardry and witchcraft. He has even informed us that if we practice these things we will not enter the kingdom of heaven.

Paul wrote, “Now the works of the flesh are manifest, which are these; Adultery, fornication, uncleanness, lasciviousness, Idolatry, witchcraft, hatred, variance, emulations, wrath, strife, seditions, heresies, Envyings, murders, drunkenness, revellings, and such like: of the which I tell you before, as I have also told you in time past, that they which do such things shall not inherit the kingdom of God.” (Galatians 5:19-21)

Allowing your child to read Harry Potter books will give them a desire to practice witchcraft, and if they continue they will be forbidden to enter the kingdom of heaven. God forbid that any Christian would allow or support such wickedness. “Happy is he that condemneth not himself in that thing which he alloweth.” (Romans 14:22)