This February 25th, Ash Wednesday, the movie, “The Passion of the Christ,” w 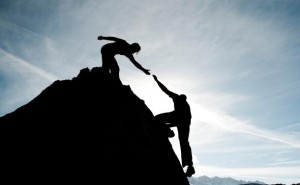 as released by writer and director Mel Gibson. Gibson, a pre Vatican II Catholic who believes in the Latin Mass and fish on Friday, has created what is proving to be one of the most controversial films of all time.

The play comprises the last twelve hours of Christ’s life, from the Garden of Gethsemane to His death on the cross. Gibson’s purpose was to share what Christ suffered for mankind. The emphasis is on the physical sufferings of Christ, and is so graphic and explicit that the movie received an “R” rating because of violence. In an interview with Diane Sawyer shown on a special Monday night edition of “Primetime,” Gibson defended the extreme violence in his film saying:

While the movie displays some flashbacks to earlier times in the life of Christ, the context of the gospel narrative is missing. The accuracy of the film has its proponents and its critics as well. Pope John Paul II is credited with saying, “It is as it was,” after seeing the film. Others, fear that Gibson took sections out of context from the Bible, added non-biblical scenes, or presented materials from a distorted viewpoint. Gibson states that he stayed close to the Biblical text, preferring it to historical accounts.

We cannot judge Gibson’s heart or motives. While he is a devoted Catholic, so was Martin Luther at one time. The movie does have extrabiblical scenes and its music presents an emotional environment that would not be found reading the Bible. Gibson does not deny that he has been influenced by the writings of Nun Anne Catherine Emmerich of France (The Dolorous Passion of Our Lord Jesus Christ) who claimed to have visions on the passion of Christ.

Evangelist Billy Graham was so moved that he wept after seeing the film. Newscaster Paul Harvey called it a “masterpiece” and said that he was greatly moved by the film. But will it really make a difference? Many evangelicals think it may be the greatest witnessing tool in this century or ever. Does the film evoke passion and feelings? Yes it does. However, so do many soap operas and many other fictional works.

Jesus said, “It is the spirit that quickeneth; the flesh profiteth nothing.” (John 6:63a) The flesh profiteth nothing and representations of it profit little also. Jesus continued by saying, “The words that I speak unto you, they are spirit, and they are life.” (John 6:63b) If the sinful heart cannot be brought to repentance by the recorded words of Christ as given in the inspired Word of God as recorded in the gospel accounts, then do not expect an uninspired passion play on Christ’s life to inspire people to true Godly repentance. The words of God in the believer’s mind, with the workings of the Holy Spirit, can portray a much clearer picture of Christ’s passion to the believer than an uninspired motion picture. Once someone views a picture of Jesus, or a movie about Him, his or her mind carries a limited idea about Jesus that will be hard to have removed.

One Christian author expressed it this way: “The withdrawal of the divine countenance from the Saviour in this hour of supreme anguish pierced His heart with a sorrow that can never be fully understood by man. So great was this agony that His physical pain was hardly felt.” (The Desire of Ages, by Ellen White, page 753)

The film is charged by many to be anti-Semitic. To these charges, Gibson says that the film simply tells a part of the gospel story. Gibson acknowledges that we all killed Jesus. He died for the sins of the world. True, it was at the hands of the Jewish leaders and the Roman Empire, but this is also part of the facts, just as it was part of the fact that the German government killed over six million Jews during the holocaust. We have Auschwitz still with us as a memorial whose upkeep is paid for by the Germans! The movie, “Schindler’s List” (1993), tells of Oskar Schindler who used Jews to start a factory in Poland during the war. He witnesses the horrors endured by the Jews and starts to save them. This movie did not cause hatred toward Germans, nor an uprising against them.

Some evangelical Christians believe that the opposition to the film proves it must be good and correct and that Satan is working against it. However, rejection by certain critics does not mean that it is acceptable, neither does acceptance by the Pope make it bad. Popular opinion never decides good or bad. I believe that the focus of the film is off the mark and that it portrays a mystical Christ, with an emphasis on physical sufferings, instead of the Biblical Christ whose sufferings were primarily emotional and spiritual. Further, I believe that the physical representation of the gospel scenes will only limit our minds to the working of the Holy Spirit. I do not recommend that Christians view, or encourage others to watch, this film.