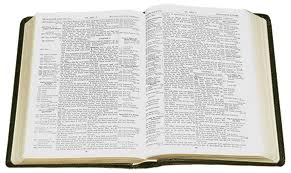 “As the rain cometh down, and the snow from heaven, and returneth not thither, but watereth the earth, and maketh it bring forth bud, that it may give seed to the sower, and bread to the eater: so shall my word be that goeth forth out of my mouth: it shall not return unto me void, but it shall accomplish that which I please, and it shall prosper in the thing whereto I sent it.” (Isaiah 55:10, 11)

The earth can bring forth vegetation only because of the moisture that comes upon it by the rain or the snow from heaven. Without this, everything would fade and perish. So also is it with the life of man and the word of God. Without the word of God the life of man is as barren of power and of good as is the earth without rain. But only let the word of God fall upon the heart as the showers upon the earth; then the life will be fresh and beautiful in the joy and peace of the Lord, and fruitful with the fruits of righteousness which are by Jesus Christ.

Notice, too, it is not you who are to do that which he pleases; but, “It shall accomplish that which I please,” You are not to read or hear the word of God, and say, I must do that, I will do that. You are to open the heart to that word, that it may accomplish the will of God in you. It is not you who are to do it, but it. “It,” the word of God itself, is to do it, and you are to letit. “Let the word of Christ dwell in you.” (Colossians 3:16)

The contrast of the word of men

There is no power in the word of a man to do what it says. Whatever may be the man’s ability to accomplish what he says, there is no power in the man’s word itself to accomplish what he says. A man’s word may express the easiest possible thing for him to accomplish, and you may thoroughly believe it, yet it is altogether dependent upon the man himself to accomplish itapart from his word. It is not his word that does it. It is he himself that must do it; and this just as really as though he had spoken no word at all. Such is the word of men.

“By the word of the Lord were the heavens made; and all the host of them by the breath of his mouth.… For he spake, and it was.” (Psalm 33:6, 9) “Through faith we understand that the worlds were framed by the word of God, so that things which are seen were not made of things which do appear.” (Hebrews 11:3) At first there were no worlds at all. More than this, there was none of the materials of which the worlds are made. There was nothing. Then God spoke, and all the worlds were in their places. From whence came the worlds, then? Before he spoke, there were none; after he spoke, there they were. Whence, then, did they come? What produced them? What produced the material of which they are composed? What caused them to exist? It was the word which was spoken that did it all. And this word did it all, because it was the word of God. There was in that word the divinity of life and spirit, the creative power, to do all that the word expressed. Such is the word of God.

Let the word of Christ dwell in you richly. Receive it, not as the word of men, but as it is in truth, the word of God, which effectually worketh also in you. Then, “as the rain cometh down, and the snow from heaven, and returneth not thither, but watereth the earth, and maketh it bring forth and bud, that it may give seed to the sower, and bread to the eater: so shall my word be that goeth forth out of my mouth: it shall not return unto me void, but it shall accomplish that which I please, and it shall prosper in the thingwhereto I sent it.” (Isaiah 55:10, 11) “To you is the word of this salvation sent.” (Acts 13:26) “And now, brethren, I commend you to God and to the word of his grace, which is able [literally, ‘full of power’] to build you up, and to give you an inheritance among all them which are sanctified.” (Acts 20:32)

The power of the Word to change us

We have seen that the power abiding in the word of God is sufficient, only upon the speaking of that word, to create worlds. It is likewise sufficient, now that it is spoken to men, to create anew, in Christ Jesus, every one who receives it.

In the eighth chapter of Matthew it is related that a centurion came to Jesus, “beseeching him, and saying, Lord, my servant lieth at home sick of the palsy, grievously tormented. And Jesus saith unto him, I will come and heal him. The centurion answered and said, Lord, I am not worthy that thou shouldest come under my roof: but speak the word only, and my servant shall be healed.… And Jesus said unto the centurion, Go thy way; and as thou hast believed, so be it done unto thee. And his servant was healed in the selfsame hour.” (Matthew 8:5-8, 13)

Now what was it that the centurion expected would heal His servant?—It was “the word only,” which Jesus would speak. And after the word was spoken, what did the centurion depend upon, to what did he look for the healing power?—It was “the word only.” He did not look for the Lord to do it in some ways apart from the word. No. He heard the word, “So be it done unto thee.” He accepted that word as it is in truth the word of God and expected it, depended upon it, to accomplish that which it said. And it was so. And that word is the word of God today as certainly as in the day that it was originally spoken. It has lost none of its power, for that word “liveth and abideth forever.” (1 Peter 1:23)

Again in John 4:46-52 it is related how a certain nobleman whose son was sick at Capernaum came to Jesus at Cana of Galilee and “besought him that he would come down and heal his son; for he was at the point of death. Then said Jesus unto him, Except ye see signs and wonders, ye will not believe. The nobleman saith unto him, Sir, come down ere my child die. Jesus saith unto him, Go thy way; thy son liveth. And the man believed the word that Jesus had spoken unto him, and he went his way. And as he was now going down, his servants met him and told him, saying, Thy son liveth. Then inquired he of them the hour when he began to amend. And they said unto him, Yesterday at the seventh hour the fever left him. So the father knew that it was at the same hour in the which Jesus said unto him, Thy son liveth.”

This is the power of the word of God to the man who receives it as it is in truth the word of God. This is the power that “effectually worketh also in you that believe.” This is the way that the word of God accomplishes that which He pleases, in those who will receive it and let it dwell in them. Notice that in both instances the thing was accomplished at the very time when the word was spoken. Notice also that the sick ones were not in the immediate presence of Jesus but some distance away—the latter was at least a day’s journey away from where Jesus was spoken to by the nobleman. Yet he was healed at once when the word was spoken. And that word is living and full of power today, as certainly as it was that day, to every one who receives it as was done that day. It is faith to accept that word as the word of God and to depend upon it to accomplish the thing that it says. For of the centurion when he said,“Speak the word only and my servant shall be healed,” Jesus said to them that stood around, “I have not found so great faith, no, not in Israel.” Let Him find it now everywhere in Israel.

Let all who have named the name of Christ receive His word today as it is in truth the word of God, depending upon that word to do what the word says. Then as Christ loved the church and gave Himself for it, “that he might sanctify and cleanse it with the washing of water by the word, that he might present it to himself a glorious church, not having spot, or wrinkle or any such thing; but that it should be holy and without blemish,” (Ephesians 5:26, 27) even so it will be now to the glory of God.    ?