Recently there has been a lot of debate concerning the Ten Commandments. Liberal lawmakers have been striving to remove the Ten 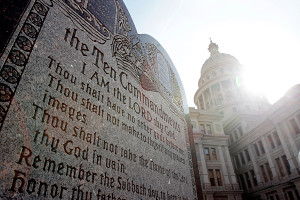 Usually those who make this claim recognize God’s requirements upon us regarding murder, stealing, worshiping false gods, etc., but they have a special hatred for the fourth commandment dealing with the Sabbath. In their zeal to rid themselves and others of the requirement to keep this commandment, many have decided to get rid of them all by saying they were nailed to the cross. Then, to maintain some decency in the church, they claim that all the other nine commandments have been restated in the New Testament and, therefore, must be kept. If this were true, then they should be seeking to uphold nine commandments, not ten.

Interestingly, May 7 is a Sunday, the first day of the week. There is one commandment that is impossible to keep on this day, the fourth commandment, which says, “Remember the sabbath day, to keep it holy. Six days shalt thou labour, and do all thy work: But the seventh day is the sabbath of the LORD thy God: in it thou shalt not do any work, thou, nor thy son, nor thy daughter, thy manservant, nor thy maidservant, nor thy cattle, nor thy stranger that is within thy gates: For in six days the LORD made heaven and earth, the sea, and all that in them is, and rested the seventh day: wherefore the LORD blessed the sabbath day, and hallowed it.” (Exodus 20:8-11)

We must recognize our responsibility to keep the Ten Commandments and show, by example, how they are to be kept, including the fourth commandment.

The sad reality that many students of Bible prophecy recognize in this sudden push to honor the Ten Commandments is that it will ultimately lead to legislation to uphold a day of rest on Sunday, in opposition to the Sabbath of the Bible. This has been prophesied in the Bible, and will surely come to pass. (Please see the April 2003 and March 2005 issues of Present Truth for more information. They are available upon request, or at www.presenttruth.info.)

According to the Bible, Sunday is one of the “six working days.” (Ezekiel 46:1) God said, “Six days shalt thou labour, and do all thy work.” (Exodus 20:9) Honoring one day of the week above another is strictly religious in nature, directly relating to our worship of God. There can be no other reason for honoring a day of the week than that of worship. Since Sunday observance can only relate to worship, the government has no right to regulate what I may or may not do on Sunday if it is lawful any other day of the week. Yet, this is precisely what the government sought to do in the time of the Roman Emperor Constantine (306-337 AD), when it was used to persecute God’s people, and it is what many religious leaders are seeking to do again.

The mark of the beast crisis will revolve around worship and the government legislation of worship. It is certain that the governments of this world will pass a universal law regarding worship. (Revelation 13:11-18) They will follow the example of Constantine and enforce religious observance of Sunday.

God makes it clear that if we want to enter the kingdom of heaven we must “do his commandments.” “Blessed are they that do his commandments, that they may have right to the tree of life, and may enter in through the gates into the city.” (Revelation 22:14)

What does the Bible say will happen, at the time of the second coming of Christ, to those who transgress God’s law? “Behold, the day of the LORD cometh, cruel both with wrath and fierce anger, to lay the land desolate: and he shall destroy the sinners thereof out of it.” (Isaiah 13:9) That is a very solemn warning. It is no wonder the Lord says, “Prepare to meet thy God.” (Amos 4:12)

Let us exalt the Ten Commandments before the people of this nation. Yet, in the midst of our eagerness to share them with the world, let us not overlook the fourth commandment, which deals with the Sabbath. This Commandment is just as valid today as it ever has been.

Let us stand up in defense of God’s law. Let us demonstrate, by our actions, that we are willing to obey God’s commandments, including His command to keep holy the seventh day of every week, by ceasing from our worldly labors and devoting our attentions to Him in worship and praise on His holy day, even though our friends, families, and neighbors may turn against us because of our stand for the truth. The real issue concerning the Ten Commandments is not whether or not they will be displayed in public places, but whether or not we will acknowledge their validity by our words and actions.