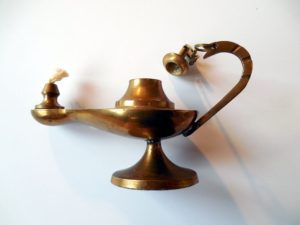 “Then shall the kingdom of heaven be likened unto ten virgins, which took their lamps, and went forth to meet the bridegroom. And five of them were wise, and five were foolish. They that were foolish took their lamps, and took no oil with them: But the wise took oil in their vessels with their lamps. While the bridegroom tarried, they all slumbered and slept. And at midnight there was a cry made, Behold, the bridegroom cometh; go ye out to meet him. Then all those virgins arose, and trimmed their lamps. And the foolish said unto the wise, Give us of your oil; for our lamps are gone out. But the wise answered, saying, Not so; lest there be not enough for us and you: but go ye rather to them that sell, and buy for yourselves. And while they went to buy, the bridegroom came; and they that were ready went in with him to the marriage: and the door was shut. Afterward came also the other virgins, saying, Lord, Lord, open to us. But he answered and said, Verily I say unto you, I know you not. Watch therefore, for ye know neither the day nor the hour wherein the Son of man cometh” (Matthew 25:1-13).

All ten virgins slumbered and slept. But when the midnight cry was given only five of them were ready. Only five of them had enough oil. They were the ones who were concerned for their salvation and walk with God. They were the ones who had a daily relationship with the Saviour. The five virgins who didn’t have enough oil were careless with both. Maybe they only had a once-a-week relationship with God, or only called on Him when they were in trouble or a crisis. They both were advocates for the truth and were attached to those who believed the truth. The main difference is they didn’t have the Holy Spirit in their lives, so their head knowledge did them no good. Think about this: fifty percent of those who professed to believe didn’t make it to heaven. Jesus gave a talk about these people. 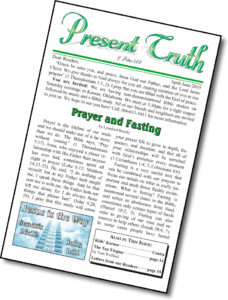 “Not every one that saith unto me, Lord, Lord, shall enter into the kingdom of heaven; but he that doeth the will of my Father which is in heaven. Many will say to me in that day, Lord, Lord, have we not prophesied in thy name? and in thy name have cast out devils? and in thy name done many wonderful works? And then will I profess unto them, I never knew you: depart from me, ye that work iniquity” (Matthew 7:21-23).

We are saved by the sacrifice that Jesus made in our behalf. We have to only confess our sins and invite Him into our lives. Our debt is paid, but this does not give us a license to continue to live as devils, but instead gives us the ability and the privilege to live godly.

(This study was written by a prisoner in Oregon. I pray it is a blessing.     Editor)