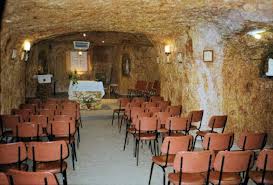 The underground that we are speaking of here is the Underground Church that is not yet manifested in America. These churches are in operation in many parts of the world where being a true Christian means to be persecuted by the government. One of the most difficult things to understand is the line that divides the true Christian from the surface Christian. Soon, however, that line will be of a much clearer nature. It is easy to call yourself a Christian now, but when you or your loved ones are to suffer severe torture and death it will not be as easy.

Jesus proclaimed to the Pharisees of His day, “Behold, I send unto you prophets, and wise men, and scribes: and some of them ye shall kill and crucify; and some of them shall ye scourge in your synagogues, and persecute them from city to city.” (Matthew 23:34) Paul and the rest of the apostles suffered severe persecution by the religious establishment of their day.

The minds of men have had centuries in which to wax more and more wicked in the conceiving of tortures to inflict upon men and women, if only to get them to be informants for a short time. “Brother shall deliver up the brother to death, and the father the child: and the children shall rise up against their parents, and cause them to be put to death.” (Matthew 10:21) To betray a former brother in Christ is one of the most hideous sins against Jesus and His church. When you think of this you must think of Judas and remember that he was looked upon as a friend of Jesus.

The above-ground church in America

The above-ground church is simply church organizations that believe that they can help and be helped by the government. In this case we are speaking of so-called “Christian” churches and the United States government. Many believe that if the government is made righteous, it will then make righteous laws to govern the people. This thinking has always turned out to be a fatal error. It is true that we have many wicked laws, but any time a government has made laws regarding religion it has cost many lives. It is good to have laws restricting us from killing, stealing, adultery, etc., but to have a law that infringes upon the way one chooses to worship God is going too far. In the time of Christ, the Jews united with the Romans. The largest religion professing the worship of the true God, when united with that ungodly government of Rome, compromised their faith. “But they cried out, Away with him, away with him, crucify him. Pilate saith unto them, Shall I crucify your King? The chief priests answered, We have no king but Caesar.” (John 19:15) Consequently, the city of Jerusalem was destroyed in 70 A.D.

The union of the Christian church with Pagan Rome formed the Roman Catholic Church; eventually leading to the senseless torture, mutilation and murder of countless millions of Christians. (See Foxe’s Book of Martyrs.) In recent years the professed churches of Europe and Russia have claimed such things as “communism and Christianity are fundamentally the same and could coexist.” (Tortured for Christ, page 16)

Richard Wurmbrand, a Rumanian Christian, wrote, “The communists convened a congress of all Christian bodies in our parliament building. There were four thousand priests, pastors, and ministers of all denominations. These four thousand priests and pastors chose Joseph Stalin as honorary president of this congress. At the same time he was president of the World Movement of the Godless and a mass murderer of Christians. One after another, bishops and pastors arose in our parliament building and declared that communism and Christianity are fundamentally the same and could coexist. One minister after another said words of praise toward communism and assured the new government of the loyalty of the Church.” (Tortured for Christ, pages 15, 16, emphasis supplied)

The world governments, united with the World Council of Churches, could choose an honorary political leader in the United States or the United Nations to work in cooperation with the “Church.” This would create a camaraderie between the unchristian government and the one world church! With each influencing the other, this would be the spiritual fornication spoken of in Revelation 17:1, 2: “Come hither; I will shew unto thee the judgment of the great whore that sitteth upon many waters: With whom the kings of the earth have committed fornication, and the inhabitants of the earth have been made drunk with the wine of her fornication.” Those who do not agree with this ungodly union will appear as non-conformists. To the new order they will stand out as people who do not care, or who are against what is good. Of course they will claim that everything is being done to make this a better nation morally, and a better place to live.

When they cry peace!

To have peace on this earth means to have no enemies that can be a threat to your borders. If you have people among you who are not in harmony with your ideas or ideals, andwho serve another ruler than yours, clearly they are your enemy. If those enemies can be killed or, better yet, converted to your ideas, your cause will be more likely to succeed. Soon it will be only those who are in harmony with the government-compromising churches of this world that will be able to “buy or sell.”

“And I stood upon the sand of the sea, and saw a beast rise up out of the sea, having seven heads and ten horns, and upon his horns ten crowns, and upon his heads the name of blasphemy.” (Revelation 13:1) A beast in prophecy is a kingdom, or a world power. (See Daniel 7:23.) The first beast in this chapter is clearly a representation of the Papacy which ruled during the Dark Ages.

The fire and miracles here appear to be symbolic of a revival, and in this case it must be a false revival. Today we see the largest of so-called “Christian” revivals in recent centuries and it is planned to peak at the year 2000. Many of these revivals are conveniently titled “Global 2000,” etc., or simply point their people to a peak happening at the year 2000. Keep in mind that a true revival must be based on truth. If you have a variety of denominational ideas on salvation, tongues, Mary worship, etc., how can all professed Christians unify? Therefore, how can a true revival take place?

“And that no man might buy or sell, save he that had the mark, or the name of the beast, or the number of his name.” (Revelation 13:17) All who are in harmony with this false revival will receive the mark of the beast in their forehead or in their hand. All who are not in harmony will be looked on as “cults” who do not care about the peace for which the “church” and the government are striving. The religious system of Paul’s day brought him before the government pronouncing, “We have found this man a pestilent fellow, and a mover of sedition among all the Jews throughout the world, and a ringleader of the sect [cult] of the Nazarenes.” (Acts 24:5) Paul confessed, “But this I confess unto thee, that after the way which they call heresy [a cult], so worship I the God of my fathers, believing all things which are written in the law and in the prophets.” (Acts 24:14) Name calling is not a new art.

“These things have I spoken unto you, that ye should not be offended. They shall put you out of the synagogues: yea, the time cometh, that whosoever killeth you will think that he doeth God service. And these things will they do unto you, because they have not known the Father, nor me.” (John 16:1-3) Notice that God’s people will be put out of the so-called “Christian” institutions.

“And the dragon was wroth with the woman, and went to make war with the remnant of her seed, which keep the commandments of God, and have the testimony of Jesus Christ.” (Revelation 12:17) A woman in prophecy symbolizes a church. “I have likened the daughter of Zion to a comely and delicate woman.” (Jeremiah 6:2) Even a false church is symbolized by a woman in Revelation 17:1-5.

The following is a testimony from a member of the Underground Church in Russia: “One of our workers was a young girl of the Underground Church. The communist police discovered that she secretly spread Gospels and taught children about Christ. They decided to arrest her. But to make the arrest more agonizing and as painful as they could, they decided to delay her arrest a few weeks, until the day she was to be married. On her wedding day the girl was dressed as a bride. The most wonderful, joyous day in a girl’s life! Suddenly, the door was pushed open and the secret police rushed in.

“When the bride saw the secret police, she held out her arms toward them to be handcuffed. They roughly put the manacles on her wrists. She looked toward her beloved, then kissed the chains and said, ‘I thank my heavenly Bridegroom for this jewel He has presented to me on my marriage day. I thank Him that I am worthy to suffer for Him.’ She was dragged off, with weeping Christians and a weeping bridegroom left behind. They knew what happens to young Christian girls in the hands of communist guards. After five years she was released-a destroyed, broken woman, looking thirty years older. Her bridegroom had waited for her. She said it was the least she could do for her Christ. Such beautiful Christians are in the Underground Church.” (Tortured for Christ, pages 39, 40, emphasis supplied)

The Bible lets us know that what is ahead has already happened before. (Ecclesiastes 3:15) The Underground Church has always been a friend to Jesus Christ. It has stayed the most faithful of all the churches that have existed on this earth. It has continued to stay faithful because of its refusal to compromise with the world.

This article was not meant to impose unneeded fear on any who read it. It is based on biblical as well as historic truth, and its purpose is to encourage us to be ready for the last days of earth’s history. The author has no purpose to sensationalize, but rather to cause us to realize that here in America we need a much closer relationship with Jesus.

Foremost, Christ’s church must be based on doctrinal truths that lead to the perfecting of the saints. True righteousness by faith, which can come by Christ alone, and many other truths will be our focus in the newsletters ahead. Please read these letters with your Bibles open; and please send your comments to us!