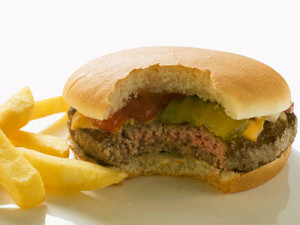 Smart eating can now be taken literally. Last October the Society for Neuroscience held a conference in San Diego where researchers presented several studies demonstrating that a particular type of fat attacks brain tissues, muddying thought and destroying memory. This type of fat is known as trans fat or trans fatty acids (TFA).

One of the researchers, Lotta Granholm, PhD., Director of the Center on Aging at the medical university of South Carolina, said, “After I did this study, my husband and I went through our fridge and threw out most of the stuff with trans fats in it.”

Granholm studied rats, but many experts are confident that the findings apply to humans also. For six weeks, the rats ate a diet similar to the average American’s, except that one group’s meals contained vegetable oil while the second group’s contained trans fatty acids.

To test the rats, the researchers set up a series of mazes that become progressively more difficult. Rats eating TFA made many more errors than the other group. The more complex the challenge, the worse the TFA eaters fared. And, unlike the vegetable oil group, they didn’t seem to learn from previous trips through a maze. Granholm suspects that the trans fats were choking off a key neurological protein, possibly by inflaming the brain’s tissues.

Trans fat is a man-made product that food processors love because it is solid at room temperature and it has a long, stable shelf life. It doesn’t become rancid like most natural fats. It is made by combining hydrogen with vegetable oil at high pressure in the presence of a catalyst. The resulting fat has a taste that most consumers love. It is used in nearly everything from margarine and shortening to cookies, granola bars, bread, bean dip, frozen french fries, and many other things. It is used widely by chain restaurants because it keeps their partially fried foods from deteriorating while being shipped all over the country.

The use of trans fats is also associated with heart disease. Walter Willet, MD, a professor of nutrition and epidemiology at the Harvard School of Public Health said, “Now we know that partially hydrogenated vegetable oil is a major cause of heart disease, and it should be phased out of the food supply as rapidly as possible.”

The FDA has asked all food manufacturers to disclose the trans fat content of their foods on the Nutrition Facts label by 2006. Until then, we need to read labels closely. Trans fats usually go by the name of hydrogenated or partially hydrogenated oil. The higher on the ingredients list an item is, the more of that ingredient will be found in the product. However, if a product has two or more components, such as a pie, the maker may list the low fat or fat free one first. For example, the filling, followed by the high fat component, the crust.

Read carefully even after the new labels come out, some trans fats can escape detection. Any food with less than half a gram per serving can be called trans fat free. This may not seem like much, but if it is a product you use a lot of, those half grams can add up quickly.

Food companies are working to get trans fats out of their products by 2006. Even now, some are starting to substitute more healthful oils. But the companies that supply ingredients to food manufacturers are working on another option. This is engineered oils that we’ll be hearing more about over the next few years. One company has come up with oil that is a mixture of solid, fully hydrogenated soybean oil and liquid oil. Another prospective product is oil made from soybeans that have been genetically modified to create more healthful fats.

Trans fats are only one class of compounds added to processed food. There are many others that are harmful to some degree. How much better for our health to eat foods that are natural, unprocessed, unrefined, just as they come from the garden or orchard. That way we won’t be in for a shock as substances we have thought of as harmless are shown to have devastating effects on our health, or we learn from a doctor that we have developed some serious condition.

Man has never been able to improve on what God created and he never will.