(We are continuing a series of articles commenting on Paul’s epistle to the Romans. We pray that they will be a blessing to you.    Editor) 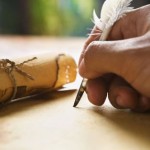 The ultimate object of studying any Bible book in detail is to be able to take in the entire book at one glance. The second chapter and the first portion of the third of Romans have given us the information that all men are in the same deplorable condition. Then comes the brighter side in the last part of the third chapter, in which the free grace of God is set forth in Christ as the Saviour of sinners. And now in the fourth chapter we have the final argument concerning justification by faith.

What shall we say then that Abraham our father, as pertaining to the flesh, hath found? For if Abraham were justified by works, he hath whereof to glory; but not before God. For what saith the scripture? Abraham believed God, and it was counted unto him for righteousness. Now to him that worketh is the reward not reckoned of grace, but of debt. But to him that worketh not, but believeth on him that justifieth the ungodly, his faith is counted for righteousness. Even as David also describeth the blessedness of the man, unto whom God imputeth righteousness without works, Saying, Blessed are they whose iniquities are forgiven, and whose sins are covered. Blessed is the man to whom the Lord will not impute sin. Cometh this blessedness then upon the circumcision only, or upon the uncircumcision also? for we say that faith was reckoned to Abraham for righteousness. How was it then reckoned? when he was in circumcision, or in uncircumcision? Not in circumcision, but in uncircumcision. And he received the sign of circumcision, a seal of the righteousness of the faith which he had yet being uncircumcised: that he might be the father of all them that believe, though they be not circumcised; that righteousness might be imputed unto them also: And the father of circumcision to them who are not of the circumcision only, but who also walk in the steps of that faith of our father Abraham, which he had being yet uncircumcised.

“As Pertaining to the Flesh”— Abraham was not the father, or ancestor, according to the flesh, of all those to whom Paul addressed the epistle. The question under consideration is justification by faith. If now it can be shown that even Abraham received no righteousness through the flesh, but that it was only by faith, the case will be practically settled.

No Place for Glorying—If in the plan of salvation there were any such thing as righteousness by works, then there would be provision made for boasting. For if one may be saved by works, then all men may be; and then those who were saved might boast of their superiority to others in like circumstances. But we have already learned that boasting is excluded. “God hath chosen the foolish things of the world to confound the wise; and God hath chosen the weak things of the world to confound the things which are mighty; and base things of the world, and things which are despised, hath God chosen, yea, and things which are not, to bring to naught things that are; that no flesh should glory in his presence.” (1 Corinthians 1:27-29)

Glorying In, and Glorying Before—If Abraham were justified by works, he might glory; but the fact is that he can not glory before God; and the proof of this is found in the words of Scripture: “Abraham believed God, and it was counted unto him for righteousness.” A man can be justified by works when it can be shown that he has done no wrong. In that case he needs no faith; his works speak for themselves. But Abraham was justified by faith, and therefore it is evident that he was not justified by any works. He who is justified only by the works of God, will glory only in those works. That is glorying in God, and is far different from glorying before God.

Paul and James—Here is where nearly everybody quotes the words of James, “Was not Abraham our father justified by works, when he had offered Isaac his son upon the altar?” (James 2:21) Unfortunately this text is usually quoted as a disparagement of the words of Paul. It seems to be taken for granted that there is a contradiction between Paul and James; and sympathy naturally leans to James, because people like to believe that there is some merit in their own works, and they imagine that this is what James teaches. Indeed, there are some who hold that James wrote for the purpose of correcting Paul’s “extreme views” of justification by faith.

We may well throw all such foolish and wicked ideas to the winds. No one need hope to come to an understanding of the Scriptures until he approaches them with the settled conviction that “all Scripture is given by inspiration of God.” The Holy Spirit does not at one time inspire words which must later on be corrected.

Faith Working—The trouble with those who thus read the words of James is that they suppose that the apostle says that Abraham was justified by his own works of faith. “Seest thou how faith wrought?” That is ever the mark of living faith, as the apostle is showing. And that is just the statement of the apostle Paul. The last verse of the third chapter of Romans tells us that by faith we establish the law.

Moreover, the very term “justification” shows that faith performs the requirement of the law. Faith makes a man a doer of the law, for that is the meaning of the term “justification by faith.” So in James we read that the works of Abraham simply showed the perfection of his faith. “And the Scripture was fulfilled which saith, Abraham believed God, and it was imputed unto him for righteousness.” The apostle James, therefore, teaches the same kind of justification that Paul does. If he did not, one or the other or both of them would be discredited as apostles. Justification by faith which works is the only kind of justification known in the Bible.

Debt and Grace—“Now to him that worketh is the reward not reckoned of grace, but of debt.” It is necessary to keep in mind what the apostle is writing about. The subject is the means by which a man is justified. To him that works for justification, the reward of righteousness is not a gift of grace, but the payment of a debt. That is, it would be so if there were any righteousness by works. In that case, the man would come to the Lord and demand of him his due.

But no man can put the Lord under obligation to him. “Who hath first given to him, and it shall be recompensed unto him again?” (Romans 11:35) If any one could do something for the Lord for which the Lord would be under obligation to him, then all things would not be from him. That is to say, the idea of justification by works is opposed to the fact that God is the Creator of all things. And, conversely, the recognition of God as Creator is the acknowledgment that righteousness comes from him alone.

Justifying the Ungodly—God justifies the ungodly. No others need justification. But mark that he does not justify ungodliness. That would be to call evil good, and to deny himself. But he justifies or makes righteous the ungodly, and that is just what they need. He justifies the believing sinner by making him a new man in Christ Jesus, and this he can do and still be just. To make a new man in righteousness is perfectly in harmony with his own character as Creator.

Working Not—“But to him that worketh not, but believeth on him that justifieth the ungodly, his faith is counted for righteousness.” Bear in mind that justification is the subject under consideration. When the apostle speaks of not working, it is evident that he means not working in order to be justified. A man is not made just by works, but the just man works yet always by faith. “The just shall live by faith.” It is faith that makes him continue to live justly. The reality of the works of faith is made more prominent in the latter part of this chapter.

The Blessedness Described— The blessedness of the man unto whom God imputeth righteousness without works is the blessedness of sins forgiven, and of freedom from the power of sin. God will not impute sin to the man who lives by faith in Christ, so that Christ’s works are his works. “As ye have therefore received Christ Jesus the Lord, so walk ye in him;… for in him dwelleth all the fullness of the Godhead bodily. And ye are complete in him.” (Colossians 2:6-10)

Blessings to Jew and Gentile— This blessedness comes alike to the circumcision and to the uncircumcision. We have here a repetition of the truth set forth in the third chapter, namely, that there is no difference in the matter of justification. Abraham is the father of the Jewish nation after the flesh, but the blessing which he received was while he was uncircumcised, the same as any other Gentile. Therefore he can be the father of both the Jews and the Gentiles. His blessing was received by faith, and therefore “they which be of faith are blessed with faithful Abraham.” (Galatians 3:9)

How the Blessing Comes—We have some time ago seen that the blessing came to Abraham through Christ. In another place the apostle Paul tells us that “Christ hath redeemed us from the curse of the law, being made a curse for us; for it is written, Cursed is every one that hangeth on a tree; that the blessing of Abraham might come on the Gentiles through Jesus Christ; that we might receive the promise of the Spirit through faith.” (Galatians 3:13, 14)

Everything in Christ—Speaking of Christ, the apostle says, “All the promises of God in him are yea, and in him Amen, unto the glory of God by us.” (2 Corinthians 1:20) There is no promise of God to any man [aside from in Christ].

(This article was taken from a series of articles printed in The Signs of the Times from October, 1895 through September, 1896. Some editing has been done for this publication.    Editor)