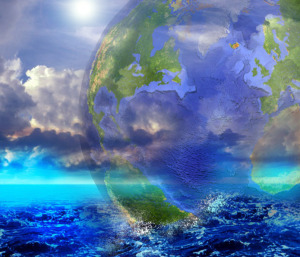 It is obvious that prior to being born of the virgin Mary Jesus was not human at all, and only divine. When Jesus became a man, the Bible says, He emptied Himself. “Let this mind be in you, which was also in Christ Jesus: Who, being in the form of God, thought it not robbery to be equal with God: But made himself of no reputation [“emptied himself.” — Green’s Literal Translation and RSV], and took upon him the form of a servant, and was made in the likeness of men: And being found in fashion as a man, he humbled himself, and became obedient unto death, even the death of the cross. Wherefore God also hath highly exalted him, and given him a name which is above every name.” (Philippians 2:5-9)

In order for Jesus to become a man He emptied Himself. The Bible is clear that He emptied Himself of at least some of the attributes of divinity. There are certain characteristics that distinguish divinity from humanity. Some of these include: omniscience (all knowing), omnipresence (the ability to be in all places at the same time), omnipotence (all powerful), and immortality (not subject to death). We know for sure from the Bible that Jesus gave up all of these attributes of divinity while He was on earth.

Omniscience: Jesus said, “But of that day and that hour knoweth no man, no, not the angels which are in heaven, neither the Son, but the Father.” (Mark 13:32) We know that, at least while Christ was on earth, He did not have knowledge of all things. In fact, the Bible says He learned while He was on earth. “And Jesus increased in wisdom and stature, and in favour with God and man.” (Luke 2:52) It is not possible for a man to increase in wisdom if he already has all wisdom.

Omnipresence: Jesus said, “Nevertheless I tell you the truth; It is expedient for you that I go away: for if I go not away, the Comforter will not come unto you; but if I depart, I will send him unto you.” (John 16:7) Jesus said that it was better for the disciples if He went away so that the Comforter could come to them. He said it would be better for them if the Comforter was there rather than Christ being there physically. Why was that? Jesus said, “I will pray the Father, and he shall give you another Comforter, that he may abide with you for ever; Even the Spirit of truth; whom the world cannot receive, because it seeth him not, neither knoweth him: but ye know him; for he dwelleth with you, and shall be in you. I will not leave you comfortless: I will come to you.” (John 14:16-18) Jesus said that the Comforter was dwelling with the disciples while He was on earth, and would be in them in the future. Then He said, “I will not leave you comfortless: I will come to you.”

The disciples were at a disadvantage to have Christ dwelling with them instead of in them. That is why Christ said that it would be better for the disciples for Christ to go away and regain his omnipresence so that He could dwell in them by His Spirit rather than dwelling with them on the outside of them. “The Holy Ghost was not yet given; because that Jesus was not yet glorified.” (John 7:39) It is evident from this that Christ was limited by His humanity from being in all places at the same time. He did not have omnipresence while He was on earth.

Immortality: The scripture says, “But we see Jesus, who was made a little lower than the angels for the suffering of death, crowned with glory and honour; that he by the grace of God should taste death for every man.” (Hebrews 2:9) It is obvious that Christ was subject to death while He was a human, for He died for our sins.

It is evident that at least the four primary characteristics of divinity were laid aside by Christ when He came to earth to be a man. Christ was divine while He was on earth, not because of what He was made of or any special powers He had, but because of who He was—the Son of God.

While Jesus was on earth He was a  human who was divine because of who He was, not because of what He was made of. He was a partaker of the divine nature of His Father and was filled with all the fulness of God. Any divine powers that were manifested in Christ were a result of His Father dwelling in Him. Jesus said, “The Father that dwelleth in me, he doeth the works.” (John 14:10) Christ was divine because of who He was, but any divine powers manifested in Him were not His own powers, for they were relinquished when He became a man.

The popular trinitarian idea that Jesus was part divine, retaining all the attributes and powers of divinity, and part human, taking upon Himself the limitations of humanity is incorrect. The Bible says that He emptied Himself of all the powers of divinity when He became a human. Jesus, of Himself, could do nothing. (John 5:19, 30)