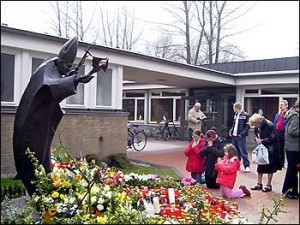 Question: What about image worship?

“Please explain the Scripture where God asked Moses to put up a figure of a serpent in the desert for the people to see and get cured. The Catholics here are distributing a tract about idols, where they are stating that God ordered Moses to do idols, and he refers to the cherubims in the ark of the covenant. What they said, and tried to debate, is that it is okay to have idols, and they base this on the serpent idol. They are making this tract, and stating that when they have their idols and saints it is okay for them to have them in their houses and buildings, and to look at them for healing.”

Let us first review the background to the brazen serpent.

The Israelites had been complaining about God’s dealings with them, and even made untrue statements about what God had done. We read, “And the people spake against God, and against Moses, Wherefore have ye brought us up out of Egypt to die in the wilderness? for there is no bread, neither is there any water; and our soul loatheth this light bread.” (Numbers 21:5) God had performed miracles for the Israelites to provide them with food and water, yet they claimed that God did not provide these things. In God’s mercy He had protected the Israelites from the poisonous serpents all around them, but because of their stubbornness, murmuring and disbelief, God removed His protection and many people were bitten by the serpents and died.

We read, “And the LORD sent fiery serpents among the people, and they bit the people; and much people of Israel died. Therefore the people came to Moses, and said, We have sinned, for we have spoken against the LORD, and against thee; pray unto the LORD, that he take away the serpents from us. And Moses prayed for the people.” (Numbers 21:6, 7)

“And the LORD said unto Moses, Make thee a fiery serpent, and set it upon a pole: and it shall come to pass, that every one that is bitten, when he looketh upon it, shall live. And Moses made a serpent of brass, and put it upon a pole, and it came to pass, that if a serpent had bitten any man, when he beheld the serpent of brass, he lived.” (Numbers 21:8, 9) Some Israelites stubbornly refused to look on the brass serpent, thinking that just looking at it could not possibly heal them, and they died. Others felt their condition was so terrible that they could not possibly be helped, they would not look at the brass serpent, and they also died. Yet many trusted God’s Word, looked upon the brass serpent and were immediately healed.

To many people the serpent was a sign of the curse of sin. Through the symbol of the serpent God was able to show that His Son would be made a curse for us so that we could be healed from our disease of sin. The likeness of a serpent that Moses lifted up represented Christ when He would be delivered up for our sins. All who will look to Christ in faith, trusting in His Word, will be healed. Jesus said, “As Moses lifted up the serpent in the wilderness, even so must the Son of man be lifted up: That whosoever believeth in him should not perish, but have eternal life. For God so loved the world, that he gave his only begotten Son, that whosoever believeth in him should not perish, but have everlasting life.” (John 3:14-16)

Whatever the sin, whatever wickedness you have committed, look to Christ in faith, and He will heal you, for He has promised.

Some mistakenly conclude that the story of Moses lifting up the brass serpent, along with the fact that golden angels were placed on the ark of the covenant, give us permission to fashion idols and bow down to them. Yet this is expressly forbidden in the Ten Commandments. God said, “Thou shalt not make unto thee any graven image, or any likeness of any thing that is in heaven above, or that is in the earth beneath, or that is in the water under the earth: Thou shalt not bow down thyself to them, nor serve them: for I the LORD thy God am a jealous God, visiting the iniquity of the fathers upon the children unto the third and fourth generation of them that hate me; And shewing mercy unto thousands of them that love me, and keep my commandments.” (Exodus 20:4-6) God did not change His mind about idols. The commandment forbids bowing down to or serving idols. If the idol is a representation of a dead person, such as Peter, James, John, Mary, etc., then it is even more of an abomination in God’s sight, because He has forbidden communication with dead people. “There shall not be found among you any one that maketh his son or his daughter to pass through the fire, or that useth divination, or an observer of times, or an enchanter, or a witch, Or a charmer, or a consulter with familiar spirits, or a wizard, or a necromancer. For all that do these things are an abomination unto the LORD: and because of these abominations the LORD thy God doth drive them out from before thee.” (Deuteronomy 18:10-12) In the Young’s Literal Translation, the word “necromancer” was replaced with “one seeking unto the dead.”

All communication with dead people is strictly forbidden by God. King Saul died because he had tried to do this. “Saul died for his transgression which he committed against the LORD, even against the word of the LORD, which he kept not, and also for asking counsel of one that had a familiar spirit, to enquire of it.” (1 Chronicles 10:13) Those who communicate with dead people are really communicating with demons disguised as dead people, for “the dead know not anything.” (Ecclesiastes 9:5) For more information on this subject, please contact us and request the tract entitled, “What the Bible Says About Hell.”

The likeness of a serpent that Moses raised on a pole for people to look upon and be healed was not to be bowed down to or served, nor were the angels on the ark to be bowed down to or served. These are examples of likenesses being made by God’s people, at His direction, but they were not to be worshipped or reverenced. The likeness of the serpent was only used once by God’s people, for a particular purpose, and it was not designed to be used again. Many years later, when Hezekiah became king of Judah, “He removed the high places, and brake the images, and cut down the groves, and brake in pieces the brasen serpent that Moses had made: for unto those days the children of Israel did burn incense to it: and he called it Nehushtan.” (2 Kings 18:4)

On page 39 of the book, Handbook for Today’s Catholic, the Ten Commandments are listed as shown in the left portion of the box below.

In the Bible (including the Catholic Bible) the Ten Commandments are listed as shown in the right portion of the box below.

For more information about the attempt by the Roman Catholic Church to change God’s law, contact us and request the tract entitled “The Law of God.”