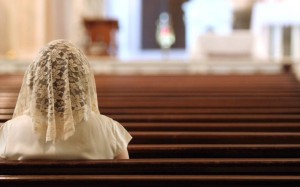 What about women’s head coverings?

“In a recent Present Truth Question and Answer page, you addressed a question from Zimbabwe, concerning women’s place in the church. About that same time, I received the enclosed article, ‘The Women’s Head Veiling,’ …which I am enclosing in the hopes that you will have time to read it, and perhaps have time and space to address the subject in a future issue of Present Truth.”

You brought up a very good question. As you read 1 Corinthians 11:2-16 it is obvious that there was some confusion among the Corinthians regarding head coverings during prayer and prophesying. Some of the women in that church must have decided to reject the custom of the Jewish women, who always covered their heads in public. “It was… a custom among ancient females, and one that was strictly enjoined by the traditional laws of the Jews, that a woman should not appear in public unless she was veiled. See this proved by Lightfoot in loco.” (Barnes New Testament Notes on 1 Corinthians 11:5)

Concerning the Greek word paradosiv, Spiros Zodhiates, in his book, The Complete Word Study Dictionary—New Testament, wrote, “A tradition, doctrine or injunction delivered or communicated from one to another, whether divine (1 Cor. 11:2; 2 Thess. 2:15; 3:6) or human (Matt. 15:2, 3, 6; Gal. 1:14; Col. 2:8). In Mark 7:3, 5, the expression ‘the tradition of the elders’ occurs. The Pharisees delivered to the people by tradition their ancestors’ many injunctions which were not written in the Law of Moses. For this reason the sect of the Sadducees rejected them, saying that what was written should be esteemed obligatory, but that which came from oral tradition need not be observed. Thus, Josephus explains the expression ‘the traditions of the elders’ or of the Pharisees. The words of the elders were considered more desirable than the words of the prophets.”

Today when we speak of tradition it usually indicates a ritual or practice that is performed merely because it is the established way of doing things, or because our ancestors did it that way. TheWebster’s New World College Dictionary defines “tradition” as “the handing down orally of stories, beliefs, customs, etc. from generation to generation… a long established custom or practice having the effect of precedent or unwritten law… Theologically, a) among Jews, the unwritten religious code and doctrine regarded as handed down from Moses b) among Christians, the unwritten teachings regarded as handed down from Jesus and the Apostles.” According to this definition there is no room for a tradition that is written down as law. Once it is written down as law, then it ceases to be a tradition and becomes a law.

It is clear that at least up until the time Paul wrote 1 Corinthians 11, the practice of women covering their heads was a tradition that was orally handed down by the Jews and many other nations around them. It was not a written law. You cannot find any command in the Old Testament, or the teachings of Jesus, for women to cover their heads, whether it be during prayer or at any other time. There is no record that this tradition existed in the Garden of Eden, nor was this tradition unique to God’s people. There were many nations who also practiced this tradition. Today, in many eastern countries, this custom is still widespread. Even in the United States this custom is practiced among some groups of Christians.

Immediately after Paul commended the Corinthians for keeping the traditions he delivered to them, he began expounding on head coverings. In verses 4 and 5 he wrote, “Every man praying or prophesying, having his head covered, dishonoureth his head. But every woman that prayeth or prophesieth with her head uncovered dishonoureth her head: for that is even all one as if she were shaven.” (1 Corinthians 11:4, 5) Later in this chapter Paul wrote, “Judge in yourselves: is it comely that a woman pray unto God uncovered?” (1 Corinthians 11:13) Paul appealed to the Corinthians’ reason to settle the matter. Apparently, at that time, it was not commonly recognized as proper for a woman to engage in prayer or prophesying with her head uncovered. If she did, it would go contrary to the established tradition of women having their heads covered in public. At that time, if women were allowed to participate in prayer and prophesying with their heads uncovered, it would bring a reproach upon the church. To the other nations around them, it would look like the women in the church were not submissive to their husbands, because the head covering, at that time, was recognized as a sign of a woman’s submission to her husband.

The question is, “Is this custom obligatory for us today?” Should we, as God’s people, prohibit women from participating in prayer and prophesying with their heads uncovered? Paul wrote, “Judge in yourselves: is it comely that a woman pray unto God uncovered?” (1 Corinthians 11:13) At that time it was obviously not comely or appropriate. It was not the generally accepted custom, even among heathen nations, for this to take place, and if the church allowed it then, it would bring reproach upon the church. However, today the generally accepted custom, at least in the United States, is for women to be seen in public with their heads uncovered. This is also true in most churches of today. Today, if a woman participates in prayer or prophesying with her head uncovered it does not bring a reproach upon the church, because it is not generally regarded as inappropriate.

For the first 4,000 years of earth’s history there was no divinely inspired, written law regarding head coverings for women. In Paul’s day it was a common custom for women to be seen in public with their heads covered. Paul referred to head coverings for women as a custom and a tradition, and he instructed us to judge for ourselves whether it is comely or not to continue this tradition. Today it is a custom for women to be seen in public with their heads uncovered. When a woman is seen with her head uncovered, even in church, in prayer, or engaged in prophesying, it does not bring a reproach upon God’s church. The real issue in this portion of Paul’s letter was the overall image that God’s people presented to the world. Paul was concerned that some people in the church at Corinth were carrying on practices that would give a bad reputation to the church. This was the real issue, rather than whether a woman was to wear a head covering or not.

For these reasons I do not believe that today, at least in the society we live in here in the United States, God requires women to have their heads covered during prayer or prophesying. There are certain areas and cultures in this world today, where the custom remains for women to have their heads covered. In such cultures I believe Paul’s counsel regarding this custom applies.

If a woman chooses, even in a culture that does not expect it, to cover her head during prayer, prophesying, while she is in public, or all the time, that is her choice. I do not see a problem with that. It is when this practice is believed to merit salvation, or when it is forced upon others, that it becomes a problem.

I would like you to consider something for a moment. There are some who claim, based upon the Scriptures we just examined, that women must always wear head coverings because Paul wrote that women should pray with their heads covered and he also wrote that we must “pray without ceasing.” (1 Thessalonians 5:17) However, keep in mind that Paul also wrote that men should pray with their heads uncovered. If we are consistent in following this line of reasoning for men, then we must forbid men from covering their heads at all times so that they can pray without ceasing with their heads uncovered. Yet, I doubt you could find a man in this world who would be willing to keep his head uncovered for his whole life. This would be especially true for those men who live in cold climates where it would be injurious to health to go out in the cold without something covering the head and ears.

I hope this helps to answer your question about head coverings.