Question: Who appeared to Abraham? 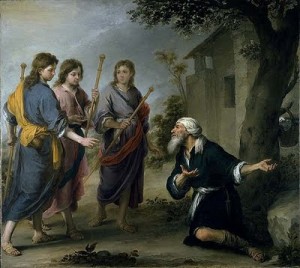 “I have a question. Who was the LORD (Yahweh) that appeared to Abraham in Genesis 18? Some say Jesus, since no man can see God the Father, so affirming Jesus as Yahweh, too. Looking forward for your response.”

The Bible says, “And the LORD [Yahweh] appeared unto [Abraham] in the plains of Mamre: and he sat in the tent door in the heat of the day; And he lift up his eyes and looked, and, lo, three men stood by him: and when he saw them, he ran to meet them from the tent door, and bowed himself toward the ground.” (Genesis 18:1, 2) The remaining portion of the chapter details the conversation that took place between the LORD and Abraham. In verse 22 it says, “And the men [the two angels with the LORD] turned their faces from thence, and went toward Sodom: but Abraham stood yet before the LORD.”

The account of Abraham’s visitors in Genesis 18 indicates that the LORD (Yahweh) Himself appeared physically to Abraham, and carried on a conversation with him. As you noted, this could not have been God, the Father, for “No man hath seen God at any time.” (John 1:18 & 1 John 4:12) And Paul wrote about the Father, stating that He is the One “Who only hath immortality, dwelling in the light which no man can approach unto; whom no man hath seen, nor can see.” (1 Timothy 6:16)

The only conclusion I can come to is that someone other than the Father appeared to Abraham—someone who also has the name Yahweh. Moses was informed of a Person who has the Father’s name in Him. God said to Moses, “Behold, I send an Angel before thee, to keep thee in the way, and to bring thee into the place which I have prepared. Beware of him, and obey his voice, provoke him not; for he will not pardon your transgressions: for my name is in him.” (Exodus 23:20) This was no ordinary angel, for He is said to have the power to “pardon your transgressions,” and God put His own name in Him. The Bible says, “And the angel of God, which went before the camp of Israel, removed and went behind them; and the pillar of the cloud went from before their face, and stood behind them.” (Exodus 14:19) Paul explained that the Israelites “did all drink the same spiritual drink: for they drank of that spiritual Rock that followed them: and that Rock was Christ.” The “angel of God” who went before the children of Israel was none other than Jesus Christ Himself.

Please do not get confused by the fact that Jesus Christ is called an angel. The Hebrew word dalm (mal-awk) that was translated Angel, literally means, a “messenger” or a “representative.” (Brown-Driver and Brigg’s Hebrew Lexicon) This word is used of men, literal angels, and of Jesus Christ Himself, all of whom are messengers or representatives of God. Jesus is called the “messenger [angel] of the covenant.” (Malachi 3:1) So, Jesus Christ can rightfully be called the Angel of the LORD, even though He is not a literal angelic being. As we have seen, the Angel of the LORD has the name of Yahweh in Him, which only makes sense, because He is God’s own Son, who “hath by inheritance obtained a more excellent name than” the angels. (Hebrews 1:4) Children inherit the name of their father. Even so, Jesus Christ inherited His Father’s name, and is called Yahweh several times in the Bible.