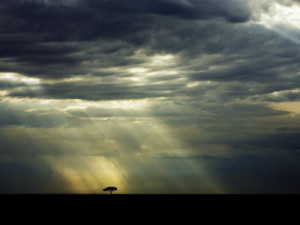 John recorded his vision, “After these things I saw four angels standing on the four corners of the earth, holding the four winds of the earth, that the wind should not blow on the earth, nor on the sea, nor on any tree. And I saw another angel ascending from the east, having the seal of the living God: and he cried with a loud voice to the four angels, to whom it was given to hurt the earth and the sea, Saying, Hurt not the earth, neither the sea, nor the trees, till we have sealed the servants of our God in their foreheads. And I heard the number of them which were sealed: and there were sealed an hundred and forty and four thousand of all the tribes of the children of Israel.” (Revelation 7:1-4)

The 144,000 are sealed before the four winds are let loose, thus protecting them from the perils of the very last days. This same group is described in chapter 14 as follows: “And I looked, and, lo, a Lamb stood on the mount Sion, and with him an hundred forty and four thousand, having his Father’s name written in their foreheads. These are they which were not defiled with women; for they are virgins. These are they which follow the Lamb whithersoever he goeth. These were redeemed from among men, being the firstfruits unto God and to the Lamb. And in their mouth was found no guile: for they are without fault before the throne of God.” (Revelation 14:1, 4, 5) The 144,000 follow the Lamb wherever He goes, indicating complete obedience, and they are described as being “without fault” and having no guile or deceit in their mouths.

Zephaniah gave a similar account when he wrote, “The remnant of Israel shall not do iniquity, nor speak lies; neither shall a deceitful tongue be found in their mouth: for they shall feed and lie down, and none shall make them afraid.” (Zephaniah 3:13) Here, this same group of people is called “the remnant of Israel.” John also spoke of a remnant in this way: “And the dragon was wroth with the woman, and went to make war with the remnant of her seed, which keep the commandments of God, and have the testimony of Jesus Christ.” (Revelation 12:17) A remnant is what is left over at the end of a job. In a carpet store you can buy a carpet remnant. It is simply a piece of carpet that was left over after a job was completed. The use of this word to refer to God’s people indicates that they are the last group of God’s people upon the earth—those who are alive when the Lord comes to redeem His people.

It is clear that the 144,000 are those who live at the end of time, who will be protected from the perils at the end, who follow Christ completely, who keep God’s commandments without committing sin, and who speak only the truth. They are the ones who will not see death and “are alive and remain” when the Lord comes. (1 Thessalonians 4:17)

You asked how they come about. It is truth that sanctifies (John 17:17) and, as we have seen, the 144,000 will only speak the truth, so they must have become acquainted with the truth. Moreover, they have allowed the truth to work in them to sanctify their souls so completely that they have ceased from sin. “Let every one that nameth the name of Christ depart from iniquity.” (2 Timothy 2:19) This verse will become 100% true for the 144,000. “He that hath suffered in the flesh hath ceased from sin.” (1 Peter 4:1) This complete sanctification will never happen to those who hold on to error, for in whatever area a person clings to error, in that area, he cannot be sanctified.

You asked, “has it started?” The process of sanctification has started, but the final sealing has not yet taken place. It will take place in connection with every case being decided for life or death, when Jesus says, “He that is unjust, let him be unjust still: and he which is filthy, let him be filthy still: and he that is righteous, let him be righteous still: and he that is holy, let him be holy still.” (Revelation 22:11) At this point all the righteous living will have been sealed, and will then be secure from being harmed by “the seven last plagues” (Revelation 15:1), or from being killed by those who wish them harm.

If you want to be in that number, study your Bible to know the truth, develop a strong, personal relationship with God and His Son by spending time with Them in prayer and private devotions, and allow the truth to have its way in your heart by yielding your life to God—“Not my will, but thine be done.” (Luke 22:42) The Bible says, “Thou shalt not hate thy brother in thine heart: thou shalt in any wise rebuke thy neighbour, and not suffer sin upon him.” (Leviticus 19:17) Let this be true about yourself as well. Do not suffer sin upon yourself. Whenever a sin comes to your mind, confess it and forsake it immediately. (Proverbs 28:13)