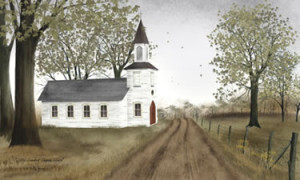 “If we believe and worship one God as Christians, why don’t we attend one church and name the church after one name?”

The sad fact is that most Christians worship a god who is different from the God who is revealed in the Bible. Many serve a god whom they think is cruel enough to burn people for billions of years, even though the Bible says, “the soul that sinneth it shall die,” (Ezekiel 18:4, 20) and that the wicked “shall be as though they had not been.” (Obadiah 16) Many serve a god who is so lenient that He is content to have His children continue sinning until the Lord comes, even though Jesus said, “Whosoever committeth sin is the servant of sin. And the servant abideth not in the house for ever.” (John 8:34) And Paul wrote, “Know ye not, that to whom ye yield yourselves servants to obey, his servants ye are to whom ye obey; whether of sin unto death, or of obedience unto righteousness?” (Romans 6:16)

Many Christians serve a god whose commandments are so weak and meaningless that “one day in seven” is as good as “the seventh-day,” which is “the Sabbath of the Lord thy God.” Most serve a god who is “one god in three persons,” otherwise known as the trinity, even though the Bible says, “But to us there is but one God, the Father, of whom are all things, and we in him; and one Lord Jesus Christ, by whom are all things, and we by him.” (1 Corinthians 8:6)

Most serve a god who claims that he sent his son into the world to die, when in reality he sent his companion into the world to pretend to be his son and then pretend to suffer and die, thus making their god out to be a liar. God says, “He that believeth on the Son of God hath the witness in himself: he that believeth not God hath made him a liar; because he believeth not the record that God gave of his Son.” (1 John 5:10)

I could continue with many other such blatant contradictions, but this is enough to show the reality that most Christians serve a god who is not revealed in the Bible. Therefore, it would not be truthful, nor ethical to put them all in one denomination and claim that they are all the true followers of Christ. Moreover, if different views about God are accepted and permitted in God’s true church, then we might as well admit the Buddhists, Muslims, Hindus, etc., into the Christian church as well.

It would be wonderful if every professed Christian would follow the written Word of God, and be obedient to all its commands for our lives. If this were the case, then we would only have one Christian church in this world, and we could all go by the same name. If this were to happen, I would recommend the name “Christian” rather than any current denominational name like Baptist, Catholic, Methodist, etc. And I would stay away from any form of hierarchy and let Christ be the head instead of any man. Let us go forth and proclaim to the world the true God of the Bible to help this goal be accomplished.