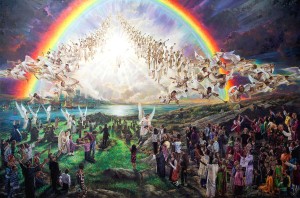 The resurrection of CHRIST is to be the one theme of Christian preaching now as well as in the days of the apostles. We are to be reminded of it, not in the formal observance of a day once a year, which has never been commanded, but by going through the process daily.

This shows us how we, as well as the apostles, may be witnesses of the resurrection of CHRIST. For we are to be witnesses as well as they. A witness is one who tells what he knows, if he is a true witness. Otherwise his testimony is good for nothing. He is not to bear witness to what has been told him, but to that of which he himself is personally assured, by his own experience. If only one man knows a certain thing from his own personal knowledge, and he tells a dozen other men, and the whole thirteen then go into court and testify to that fact, there are not thirteen witnesses, but only one. The one man has simply repeated his testimony thirteen times. The case is no stronger for the testimony of the twelve men who repeated what had been told them. They might better have held their peace. So it is with the witnesses of the resurrection of CHRIST. He who tells it because somebody else has told him, is not a witness, and might better say nothing about it. If pressed closely, all that he can say is that somebody told him so.

But is it possible for anybody in these days to be able to give testimony concerning the resurrection of CHRIST, of the same nature as testimony that is required in earthly courts? Most certainly. Can it be thought that GOD requires less positiveness in His witnesses than earthly judges in those who appear before them? Not by any means. How can they give such testimony? Simply by knowing CHRIST, and the power of His resurrection. The question is, Does JESUS live, or is He yet dead? All know that He died: may we know that He is alive again? Most assuredly. The experience of the Apostle Paul may be that of every one. The Jews said that CHRIST was dead, and Paul affirmed that He was alive. They are brought before the court on that point. How does Paul demonstrate that CHRIST is now alive? Thus: “I am crucified with CHRIST; nevertheless I live; yet not I, but CHRIST liveth in me” (Galatians 2:20). That is sufficient. That is as good testimony as could be given in any court. A man is said to be dead. I say he is alive. The question is, “How do you know?” and I reply, “He lives at my house, and is my constant companion.” That is the evidence to-day to the world, that CHRIST is risen from the dead. On this testimony alone can unbelievers be convinced. 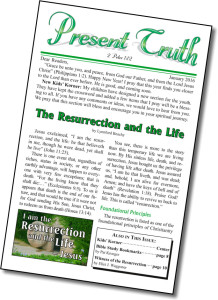 The Christian’s hope, therefore, is seen to be a certainty, and not a doubtful thing. If they know that CHRIST is risen, they know just as well that they too will be raised from the dead. Thus CHRIST has brought life and immortality to light through the Gospel. The Gospel makes known CHRIST as the risen SAVIOUR, who is alive for evermore. His life is manifested in the mortal flesh of those who believe on Him. They pass from death unto life with Him. Nevertheless they are mortal. To sleep in the grave is their sure lot, unless prevented by the coming of the Lord. But as they live by faith, and not by sight, they hold fast their faith. So, whether waking or sleeping, their life is hid with CHRIST in GOD. The Spirit of GOD which is given them is their life, and their assurance of immortality. The life is theirs now, but the immortality will be bestowed only at the coming of the Lord.

“Behold, I show you a mystery; we shall not all sleep, but we shall all be changed, in a moment, in the twinkling of an eye, at the last trump; for the trumpet shall sound, and the dead shall be raised incorruptible, and we shall be changed. For this corruptible must put on incorruption, and this mortal must put on immortality” (1 Corinthians 15:51-53). “For if we believe that JESUS died and rose again, even so them also which sleep in JESUS will GOD bring with Him. For this we say unto you by the word of the LORD, that we which are alive and remain unto the coming of the LORD shall not prevent [go before] them which are asleep. For the LORD Himself shall descend from heaven with a shout, with the voice of the Archangel, and with the trump of GOD; and the dead in CHRIST shall rise first; then we which are alive and remain shall be caught up together with them in the clouds, to meet the LORD in the air; and so shall we ever be with the Lord” (1 Thessalonians 4:14-17).

It is a very common thing for people to regard truth as of two kinds-essential and non-essential, important and unimportant. This is a great mistake. All truth is one, and cannot be divided into classes. Every point of truth is of equal importance with every other point. Truth is of God, for JESUS CHRIST whom He has sent is the truth. But the riches of CHRIST are unsearchable. He is infinite, therefore the truth is infinite. But there can be no comparison of infinities. To the human mind, at least, all infinities are equal. So the only thing necessary to be determined is whether or not a thing is true. If it is, then no matter how unimportant it may seem to human understanding, we may be sure that it cannot be ignored without sin.

In a perfect machine the smallest bolt is as important and necessary as the largest shaft, for the reason that without the bolt the shaft would be useless. So in GOD’S perfect word the smallest matter is as important as what are called the great things. GOD has not wasted his time on non-essentials. He does not speak that which is of no importance. “Every word of GOD is pure; He is a shield unto them that put their trust in Him. Add thou not unto his words, lest He reprove thee, and thou be found a liar” (Proverbs 30:6, 7).